Using hydrogen as its fuel, the 2019 Hyundai Nexo weans you off your dependence on fossil fuels for your family vehicle.

How much do you have to pay for gasoline for your family car? Unless you’re extremely rich, that’s a question every household with a car deals with on a regular basis. So it makes sense to find out more about the 2019 Hyundai Nexo, which uses hydrogen as its fuel.

Hydrogen, as any physics and chemistry teacher can tell you, is the most abundant element in the entire universe. There’s plenty of it to use, unlike the finite supplies of fossil fuels. With the Nexo you won’t have to worry about gasoline price hikes, plus you’re doing your bit in not poisoning the environment.

This isn’t the first Hyundai fuel-cell car, though. You have others like the Tucson Fuel Cell, except all these others are only available for limited leases. The Nexo is actually commercially viable enough that it’s for sale. Hyundai is confident that it can run for the next 10 years without too much hassle.

So How Does It Work?

The fuel cell generates electricity and water by capturing from the ambient air hydrogen and oxygen, and then combining them. That electricity goes towards an electric motor under the hood. You now have 161 horses driving the front wheels through the direct-drive gearbox. You also get 291 lb-ft of torque.

Previous versions of this system made cold starts a bit problematic, but that’s no longer a problem now. But Hyundai has made great strides in improving the performance of the Nexo fuel cell in cold weather, and it’s now able to start even at minus 22 degrees F.

The range you get with the fuel cell now has an EPA range of 380 miles if you go with the efficient base model Nexo Blue. Enjoy more amenities with the Nexo Limited trim, and you still get a range of 354 miles.

How Does It Drive?

Lots of people are less concerned about the engine mechanics, as they focus more on traditional family car concerns. The look is nice enough with lots of Hyundai aesthetic trademarks like the cascading grille. You also have split headlights, and below the LED daytime running lights you have the main lights in a separate aperture. The aerodynamic performance is terrific with the D-pillar roof buttresses, along with the aero-focused 19- and 18-inch wheels. 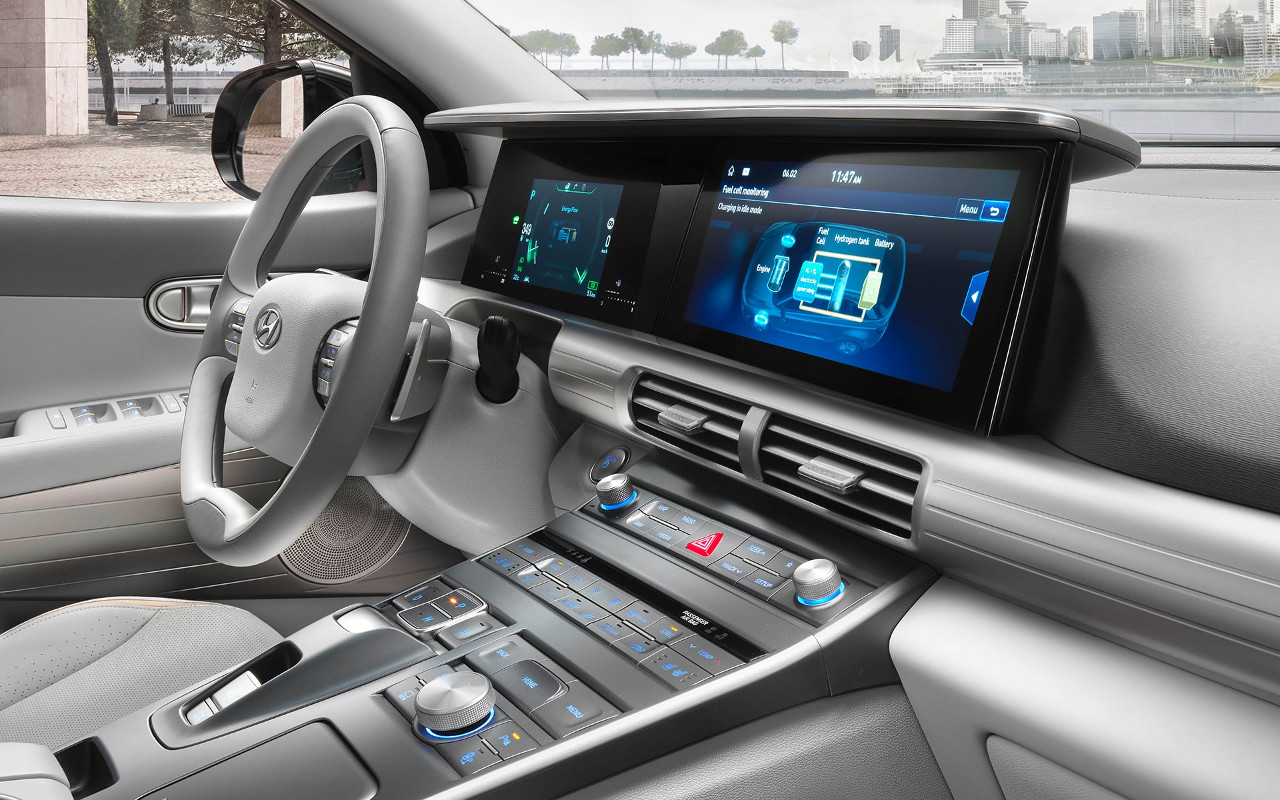 The cabin space certainly feels airy, and this is emphasized by the full-width design elements. The look of the dash is distinct and futuristic, with a floating center stack, a couple of 12.3-inch displays, a 2-spoke steering wheel, and a pushbutton transmission.

Now you might be thinking that it’s as fast as a Tesla, but it certainly is not speedy at all. Hyundai estimates that it needs 9.5 seconds to get from zero to 60mph, though some tests have put the actual time at 8.4 seconds.

At least it’s not dangerously slow, as the quick torque gives you enough thrust that you can get up to cruising speed quickly when you need to merge with highway traffic. Besides, in comparison the Toyota Prius Prime steel uses up gasoline and it still needs more than 10 seconds to reach 60mph.

You have electrically assisted steering that gives you a lightweight steering wheel. Its braking performance is respectable, as it can stop fully in 169 feet from a speed of 70mph.

There’s also a mild highway autonomy system here that’s similar to the Tesla Automatic, and it is standard to the Nexo. However, this system (which Hyundai calls the Highway Driving Assist and Lane Following Assist) isn’t all that smooth. Some systems are better, though to be honest you can also find some similar systems that perform even worse. You also have the active-safety tech you’d expect like automated emergency braking and blind-spot monitoring.

All these facts are well and good on the whole, but there’s a glaring problem that we need to acknowledge. Unlike the ubiquitous gas stations, hydrogen fueling stations are not exactly plentiful. Unless that situation drastically changes, then the 2019 Hyundai Nexo is just too futuristic for today.

Everything You Need to Know about the 2019 Hyundai Kona Electric