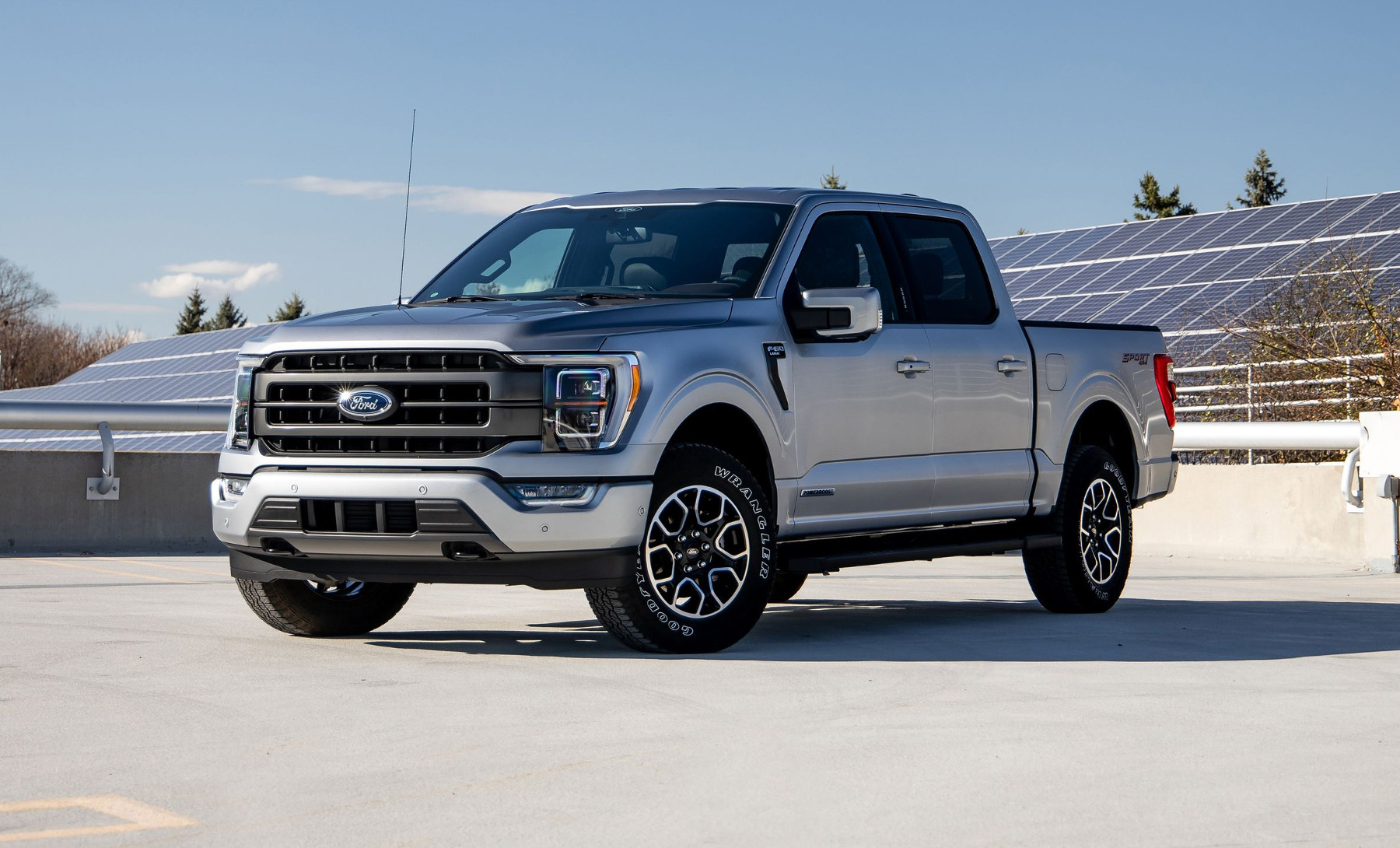 The Lariat resembles a prototype Ironman, with a slightly darker shade of hot rod red matched with chrome highlights to the bumpers, grills and bezels around the headlamps. The anodized billet grilles are caged-in with two solid bars and one thin bar running perpendicular to each. In pictures, these look like ABS plastic but one has to run their fingers across it to appreciate the craftsmanship. LED headlamps provide continuous visibility on twisting roads during night drives. The halogen taillights also provide rear visibility which will come in handy during towing. Moving laterally, we can observe the side mirrors are equipped with skull caps for the occasional knocks.

The car body suspends on 18-inch machine aluminum wheels. For those who aren’t familiar, this means the wheels are made by sculpting aluminum instead of the traditional casting process, preserving the natural metallic configuration which provides more  resistance to stress. Covering these are 275/65 R18 OWL all-terrain tires. Spaced between front and rear wheels are the chrome running boards which extended 6 inches and has a kick switch located near the rear. Turning on the kick switch tucks the running boards to prevent further damage when not using it to access the bed. There’s also an available 400W outlet located in the bed for charging lightweight equipment. And if charging equipment is not enough, the Lariat can turn into a generator. The outputs vary from 2kW up to 7.2kW.

The bed is undeniably what people buying trucks would look for. The F150 makes it easy to get on or off the bed with a pull-out step at the top portion of the tailgate. It’s also automated: with a click on the key fob you don’t have to walk all the way to fumble for the latch.

The F150 uses the 3.5L PowerBoost V6 Engine with an output of 400 horsepower and 500 lb-ft of torque, while combined output is 430 horsepower and 570 lb-ft. It’s mated to a drivetrain featuring an electronic 10-speed automatic transmission. The engine was manufactured using compacted graphite that can withstand high temperatures resulting from increased combustion rates. Improving fuel economy is the AutoStart Stop technology which shuts off the engine when the brakes are applied and deactivates when released although it detects if it’s towing. Maximum payload sits at 2120 and towing capacity is at 12,700 pounds, and if the driver was looking behind the frost-proof windows, he can treat the Lariat as a reindeer for 10 polar bears.

Depending on the variant, the fuel tank has a capacity of 23, 26 or 30.6 gallons, with the latter only available to the Powerboost engine. There’s also an optional build for a 36-gallon. The fuel economy for both city and highway is at the same 24 mpg rating. We wouldn’t worry much about the fuel economy as the F150 prioritizes using the 1.5-kWh lithium-ion battery to start things before cranking up the engine.

The F150 Lariat weighs around 5832 pounds which is 171 pounds heavier than the F150 Raptor. The improvement of the Lariat over the Raptor is its torque of 1 pound per pound-foot. It can accelerate from 0 to sixty in 5.3 seconds. Turning on the sport mode on this truck employs the auto-4WD function and when approaching redline, the Lariat experiences excessive wheelspin which counters the torque and actually slows it down.

For handling, the steering uses rack-and-pinion which should feel responsive behind the wheel. In contrast, the braking capabilities are a bit off, with a slight delay and if pressing hard and sudden, there’s an abrupt stop which may jolt you forward even when you’re strapped in. The coil springs at the front doesn’t help to reduce this at all although the effects are much more noticeable when a tow is in progress.

There are several drive modes for the F150 – Normal, ECO, Sport, Tow/Haul, Slippery, and Trail, and the 4×4 allows for more such as the Deep Snow/Sand, Mud/Rut for our folks who make trips to tundra environments.

To allow for more sense of control, additional features are present: Trailer Sway Control to let trailers remain stable and on-course, and contributing to better rear traction is an electronic-locking rear differential to give more oomph when in tow mode.  In the 4×4 variant, there’s also an option to shift to 4WD or 2WD with just the push of a button. Rolling downhill? That’s not a problem as the F150 can maintain speeds from 3 up to 20 mph with their Hill Descent Control.

The pricing for the F150 starts at $46350 but expect a little difference as this is the base price. Better contact your local dealer for more details (and probably a discount).