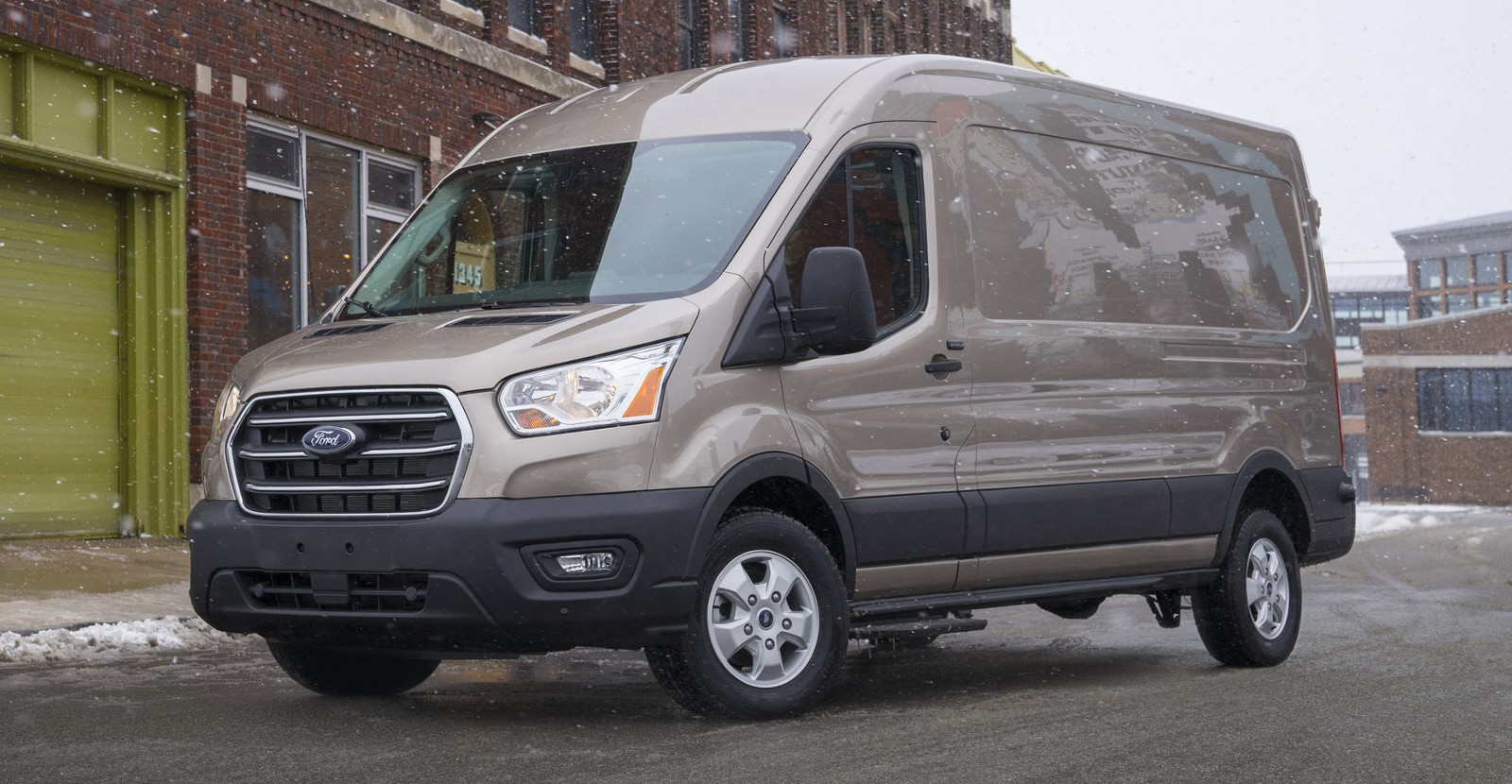 The Ford T-series have been out since 1965. Built for cargo van as Transit and accommodating passengers and aptly named Ford Tourneo since 1995, this vehicle can be built into other configurations – minibus, cutaway van chassis or pickup truck – you name it.

It’s ranked within the top 3 best-sellers for vans and has had different design iterations in every two-decade. Although the frame hasn’t changed much, the company’s decision to invest in its development only returned over 8 million units being sold. In 2019, Ford sold more than 150 thousand units in the United States alone. It still is relevant during these times where individuality has never been so much expressed with SUV’s.

The design focus for the 2020 model included facelifts to the front fascia and dashboard. What people should expect from this release is the Crew Van configuration or if in Europe, a double cab.

From a front-to-back design appreciation, the first thing to notice on the Ford Transit is the matte-black bumper mold. Two separate sheet metals have been cast to house the powerful headlamps. The headlamps use halogen and produce a bright white light. There are daytime running lamps alongside.  It’s docked on top with a hood that took aerodynamics into consideration. Two airflow vents serve to reduce drag and provide engine cooling. For vans, the front portion should at least resemble a bullet else it increasing air resistance and decreasing fuel economy.

The side mirrors have considerable surface area to allow rear visibility for the driver side and is equipped with mirror lights in areas receiving the least amount of light. It’s going to be useful for trips made at night or by dawn. During inclement weather, the mirrors automatically adjust to provide further damage to the reflective surface. Although the driver already has a good sightline due to the elevated seat, additional lighting is installed at the corners of the front bumpers to ease driving experience.

For the tail lamps, they’re configured vertically at either side of the double doors hinged to the frame of the farthest of the side molds. A step is installed to help assist passengers climbing up onto the rear seats. It’s almost not noticed but there is a third tail lamp at the top of these doors, and the height of the van is partially to blame. There are reflectors installed on each side of the step to help car drivers who might be tailing this giraffe on the highway. A little branding is put on one of the rear doors as well. 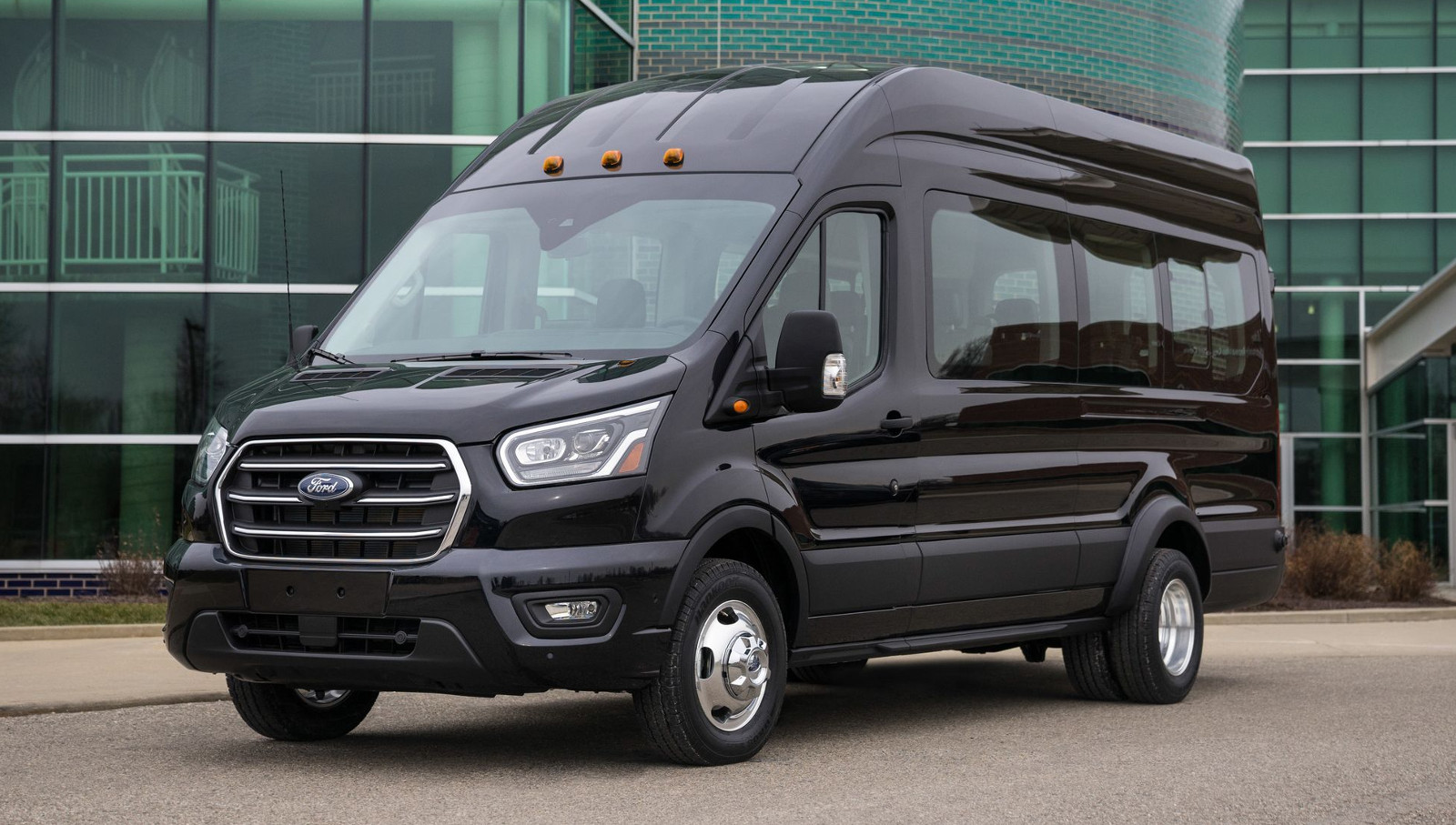 The windows for the Ford Transit 350 have a bluish tint to polarize harsh UV light. It takes care of its passengers without sacrificing visibility. Not all the windows are movable though, with the exception of the 2nd row right window being the only one that can be slid open or closed.

Moving to the front of the interior, the rear view mirror works well in day or night conditions. The steering wheel, to which the driver will be putting a substantial amount of time holding it, is only made of urethane – not too posh but it’ll get the job done.

For a truly convenient crew van experience, several bottle and cup holders are installed allowing for spill-free travels. Depending on the package purchased, the seats may either have cloth or leatherette covers. The driver’s seat is adjustable, although the front passenger is limited to fore or aft movements only. The total seating capacity for the Ford Transit 350 passenger van is 10 (or more if everybody has a small frame.)

The cavernous cabin of the Transit 350 is going to be awkwardly silent so the company decided to give 6 speakers situated evenly in the cabin. Now everybody can do a sing-along to an obscure car song movie-scene from the nineties. Or if not, there’s always the optional AM/FM radio, whatever does it for the driver. He’s the one in control.

It’s a safe enough speed and the Transit 350 is loaded with airbags to ensure that if a minor collision ever occurs, the risk for injury substantially becomes lower. A rear roof escape hatch is also installed just in case the electronics controlling the locks for the side doors won’t work.

Overall, it’s still a marketable minibus. Most people won’t really notice but it’s all about the comfort this van provides.

Keeping up to Speed with the Mazda 3 Turbo: A Compact Car Review