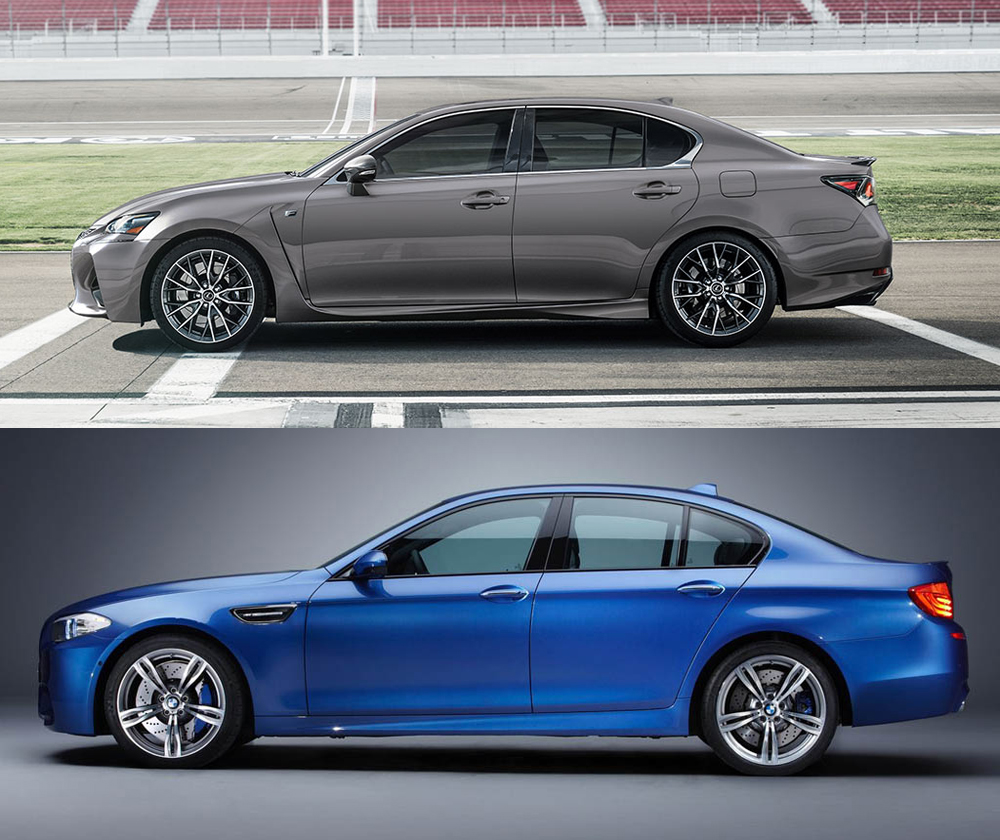 The BMW M5 has always ruled the high performance sedan market, thanks to its topnotch sedan utility, luxury ambience, and sports car performance. BMW sold more than 20,000 units of the current generation M5, proof of how successful the sedan has been. But Toyota, through its Lexus division, is out to get a slice of that market with the Lexus GS F. So how will the Japanese automaker fare in its attempt to compete with the BMW M5?

The GS F is not really the first attempt of Toyota to get a slice of the high performance sedan market, having launched the IS F less than a decade ago. But the Lexus IS F was not quite successful. Although it had a 5 liter, V8 engine, its mediocre suspension and electric steering were bad.

The Lexus GS F is powered by a 5 liter, V8 engine that produces 471 horsepower and with peak torque of 391 pound feet. That may not be enough to match up with the power of M5’s engine. The M5 ’30 Jahre’, a special model that was built to commemorate the 30th anniversary of the brand, has an engine with 600 horsepower. The other power train of the BMW M5 is a twin turbo, 4.4 liter V8 engine with an output of 560 horsepower and 502 pound-feet of torque.

Because of the disparity in the performance of the engines of the GS F and M5, there’s also a noticeable difference on the road performance of the two vehicles. The GS F’s acceleration feels flat and sluggish, while the M5 can accelerate without any issue.

Lexus may not win the power wars against the M5, but the Japanese brand knows it is not all about power. So it gives the GS F with an eight-speed automatic and a manual shift override. Drivers can select one of the three driving modes—standard for a good balance of firmness and agility, slalom for nimble steering response, and track for stability in high circuit driving.

Interestingly, the F on the name of the Lexus model stands for Fuji Speedway. This is where the luxury sedan was developed.

While it is far from being the performance car you would like to use on slalom, it performs creditably on the road. Its electric steering system is particularly helpful on the road. It would only require drivers a flick of the wrist for the car to deal with corners, and not twirling of the arms.

Lexus designers also made sure that the GS F would look like a super car both inside and outside. The interiors are well made, and it has a very contemporary look. There’s a large central navigation screen that can put to shame those of its German competitors in terms of readability and ease of use. The cabin has an attractive mix of Carbon and Alcantara trims, with its knobs, switches, and pedals placed well. If there’s something amiss, it’s the oversized steering wheel that looks out of place on a luxury sedan.

The Lexus GS F may not be a bad choice at all, but it is also hard to overlook the great things about the BMW M5. Aside from the fact that it has a more powerful engine, the luxury sedan is augmented with a competition package that puts 15 more horsepower for a final total of 575 ponies. It also includes 20 inch alloy wheels, black chrome tailpipes, and Dynamic driving mode.

All that power generated by the V8 engine is transferred to the wheels through a seven-speed clutch transmission. The M5 also features a three-mode adoptive suspension system. In all three modes, the M5 remains flat and composed when approaching corners, although the Sport and Sport modes provide a firmer ride than the Comfort mode.

Drivers who put a lot of premium on speed won’t be disappointed with the M5. The twin-turbo V8 engine can move the luxury sedan from standstill to 60 miles an hour in around 4.2 seconds. The ’30 Jahre’ is even faster as it can do that in four seconds.

Just like any BMW car, the M5 is beautiful inside. It is equipped with the patented iDrive system of BMW, which is arguably the best in-car infotainment system today. It is very quick, although drivers and passengers will have to be patient to eventually find it intuitive to use. The boot has 520 litrers of storage, which is very impressive for a sedan.

It is also well-equipped with BMW’s driver assistance technologies, from the collision warnings to lane keep assist to a night vision camera. Simply put, there are very few things you won’t like about the BMW M5.

While Lexus has come up with a very good answer to the BMW M5 with the GS F, it can’t be denied that the Japanese maker still has some catching up to do.

Jaguar XE vs. Cadillac ATS: Luxury At Its Finest