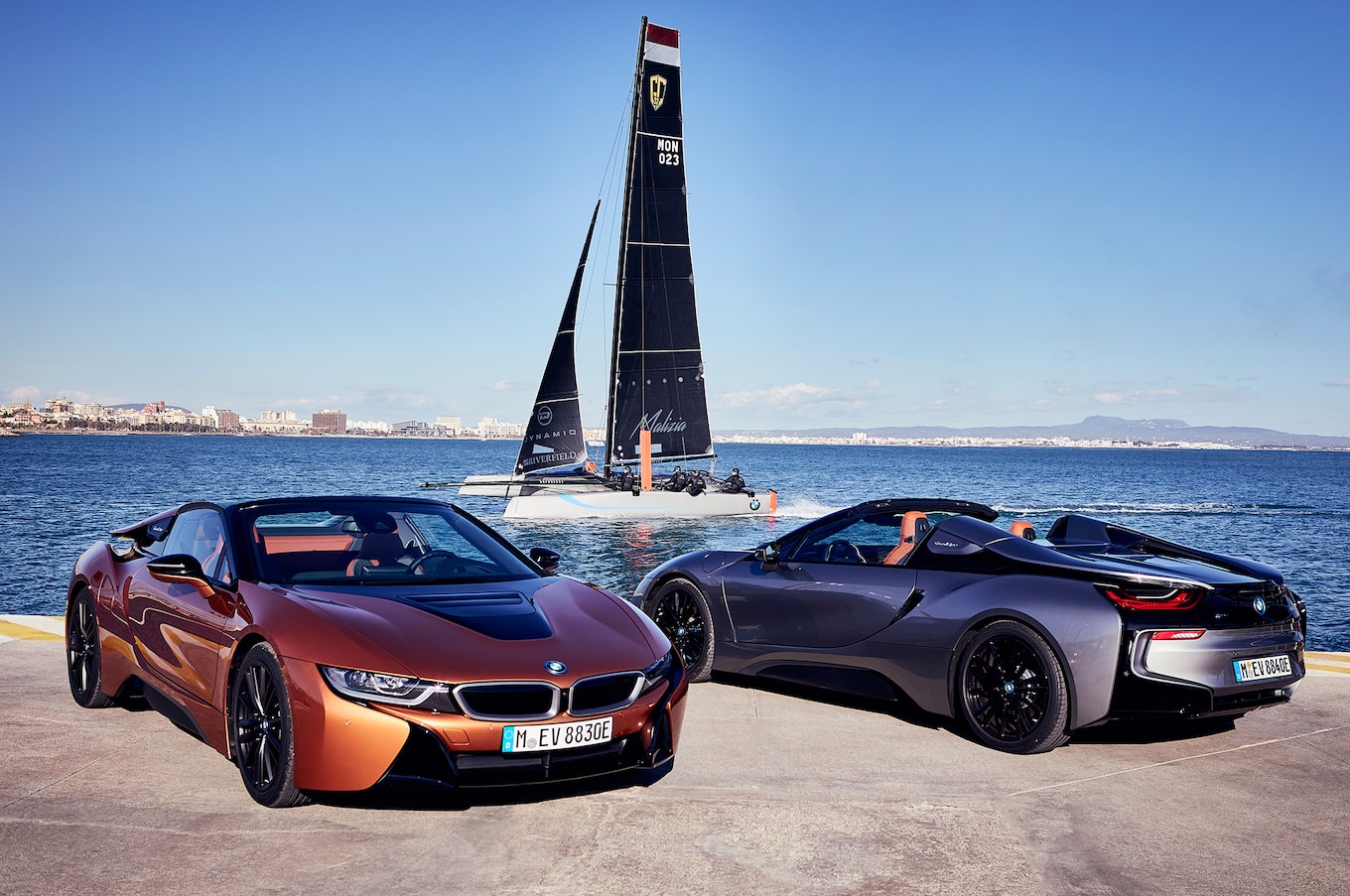 The BMW i8 Roadster is like something you’d see in your dreams. It’s a slick, exotic roadster with top hinged doors and mid mount gas engines. If you’re a BMW enthusiast you’ll know the i8 has been around for a while, but the this two-seat dynamo has been fortified with new features.

There is more to the i8 than just flashy looks though. The roof has been redesigned and it’s equipped with more powerful batteries. From the old 7.1 kw hour, the Roadster – and the coupe edition as well – can now do 11.6 kw hour or from 20 miles to 33 miles. The figure is even more impressive when you consider the 2017 i8 was only capable of 15 miles.

When set to all-electric driving mode, the i8 has a maximum speed of 65 mph, a 22 mph increase from the previous edition. The speed goes up to 75 mph when it’s on e-Drive mode.

The extra power on the i8 means the front axle electric motor puts out an additional 12 hp which total 143. This is complemented by the 184 lb ft torque, so the front axle really packs a punch. The rear axle also gets a bit of a boost with 3 hp. It doesn’t have additional torque but there is a particular filter which reduces emissions.

The generator/electric motor linking to the gas engine and the belt has not been altered, and that’s a good thing since it works. What all these means is the i8 is capable of generating 374 to 357 hp.

The specs above give you an idea of what it can do but there’s more.  From 0-60 mph the coupe takes just 3.8 seconds. The Roadster also performs better than BMW’s official behavior. You’re not going to feel the additional 17 hp while driving, but you will notice that the gas engine doesn’t need a lot of pressing.

The i8 doesn’t get in the way, whereas the previous edition would regularly kick in to generate more power, speed and acceleration. With the 2019 i8 the ride is quieter so whether you’re driving a coupe or roadster it’s going to be a smooth cruise be it in the city or around town.

The hp plays a big part but so does the torque at it is always at its peak. What all this means is that the i8 has enough power to move you around. Drive along a freeway and you’ll notice how smooth performance is.

You also get excellent results driving on mountain roads and additional power is always on hand. You can also shift into sport mode and you’ll hear the revs just like on any sports car.

The big difference with the i8 from previous editions is that combines gas and power nicely even though they’re not mechanically joined together.  The i8 is equipped with sound enhancers that make the engine even more pleasant to the ears.

Start the engine, drive and you’ll feel the difference as the car is quicker and smoother to drive. This is not a super sports car but it gets the job done in terms of putting power in the tires.

You’re not going to notice the power and engine getting together, neither the rear 6-speed and 2-speed up front change gears. If you’re looking for that stiff response you’re going to get it by letting off the throttle and quickly getting on the middle shift.

With its low center of gravity the i8 is easier to handle than its counterparts. Light and quick steering is accompanied by precision cornering. It’s best described as a smooth operator and doesn’t make a lot of noise as power is transmitted to the front.

The i8 has a solid feel, and that’s to be expected given the shape. In other words the i8 is the kind of car that will remain grounded no matter how hard you make that turn. There aren’t any bolstered seats here but with a fit cockpit and flat corners you’ll be doing fine.

The brakes on this car are very responsive and dependable. Compared to the previous model the brakes have a better feel to them. It’s not mechanical but it works. The tires are well balanced and respond to your handling while providing friction. Trail braking could use some improvements but it’s serviceable. And if you’re the type who likes aggressive corners then you’ll want to use sport mode.

BMW has consistently manufactured quality cars, and the i8 Roadster shows the company at their best. Not only is the i8 packed with powerful features, but it’s also one of the most stylish. It’s not a stretch to say the i8 looks futuristic, and really there aren’t a lot of cars like this around today.