When you think about it, the concept of “compact SUVs” seems a bit ludicrous. At first there were the hatchbacks, and then more people gravitated toward the larger SUVs for their size and performance. Now you’ve got smaller SUV that are still chunkier and with more clearance than their hatchback cousins. Still, it’s what people want. And if you want your compact SUV to come with the appropriate levels of prestige, performance, and luxury, you can choose between the BMW X1 and the Audi Q3. 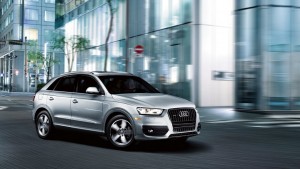 The BMW X1 is older than the Q3. In fact, it was the first of its kind among the Germans when BMW released the X1 crossover. At the time of its launch back in 2010, its look was a daring departure from the BMW 3 series , and it offered quite a bit more pizzazz.

So Audi followed suit with the Q3 and thus the whole compact SUV category became real. What Audi did was create a smaller version of its SUV, although perhaps the Q3 designation was deliberately chosen for its similarity to the word “cutie”. Of course, Audi took care to pack in every nifty little gadget you can find in the bigger Q7 version. But the Q3 was much more affordable, and so there was considerable demand for it.

Even though these SUVs are compacts, for some reason a lot of buyers want to have their compact SUVs look more imposing. The BMW X1 is a bit longer at 4454mm, compared to the 4385mm for the Q3. On the other hand, the Q3 is taller at 1608mm, although the X1 isn’t all that short at 1545mm.

For the weight, the X1 has the advantage as it only weighs 1565kgs, while the Q3 is heavier to lug around at 1660kgs.

However, this is not the entry level Q3. That one only has a 1.4-litre turbocharged petrol engine in the Q3. This was probably for marketing purposes, so that the Q3 can look more affordable by $4,000. With the 2L diesel engine, the Q3 actually becomes just a tad more expensive than the base-level X1.

The BMW also drives more like a car than the Q3. It sits flatter on curvy roads, the steering is quite sharp, and the rear wheel drive offers great dynamics. The suspension is controlled and compliant which can suit a wide variety of road conditions, and it recovers faster after large bumps.

The 8-speed automatic transmission of the X1 is also much smoother, thanks to the traditional torque converter transmission. In contrast, the Q3 comes with a dual-clutch system. The Q3’s 6-speed transmission seems to hesitate especially during low speeds. The Q3 also feels balanced and the handling is agile, but the X1 offers a better feel through the steering.

As for fuel consumption, it’s about the same when you compare two diesel engines. When you compare the Q3 gas engine to the X1 diesel, however, the difference is significant. BMW claims that you use up only 4.9 liters of diesel per 100 kilometers, although in some tests it is really about 6.5 liters. With the Q3 gas engine, the claim is 6.2 liters per 100 kilometers, with real-world usage at around 8 liters minimum.

Since the X1 is older, it’s not surprising that some of its interior aspects may seem a bit dated, especially with the dark plastics. Standard features include 17-inch alloy wheels, luxurious fake leather, climate control air-conditioning, auto headlights, rear parking sensors, sat-nav, Bluetooth phone and audio streaming and USB input.

It’s almost the same with the Q3, although the lack of the sat-nav is obvious. That’s because of the price differential—you can get the sat nav as part of the $3790 Technik package, and that upgrade obviously obliterates the price advantage if you get the 1.4L model. But you also get a reversing camera and a color screen.

There’s also no USB port in the Q3, by the way, unless you pay another $100 for the unique Audi Media Interface cable.

Both vehicles offer rather light storage capacity in the interior. For trunk space, you get 420 liters in the X1 with a wide load area, while the Q3 offers more with 460 liters along with a square load area.

This is a toss coin. The Audi Q3 offers a lot of space and a nice drive along with a lower price tag if you’re willing to forego some luxuries. But if you’re embracing the entire “luxury compact SUV” concept, then luxury features are crucial, and you’ll get more value with the BMW X1. The X1 is even more fun to drive as well.

Which Electric Car Is Better – the Mitsubishi i-MiEV or Nissan Leaf?