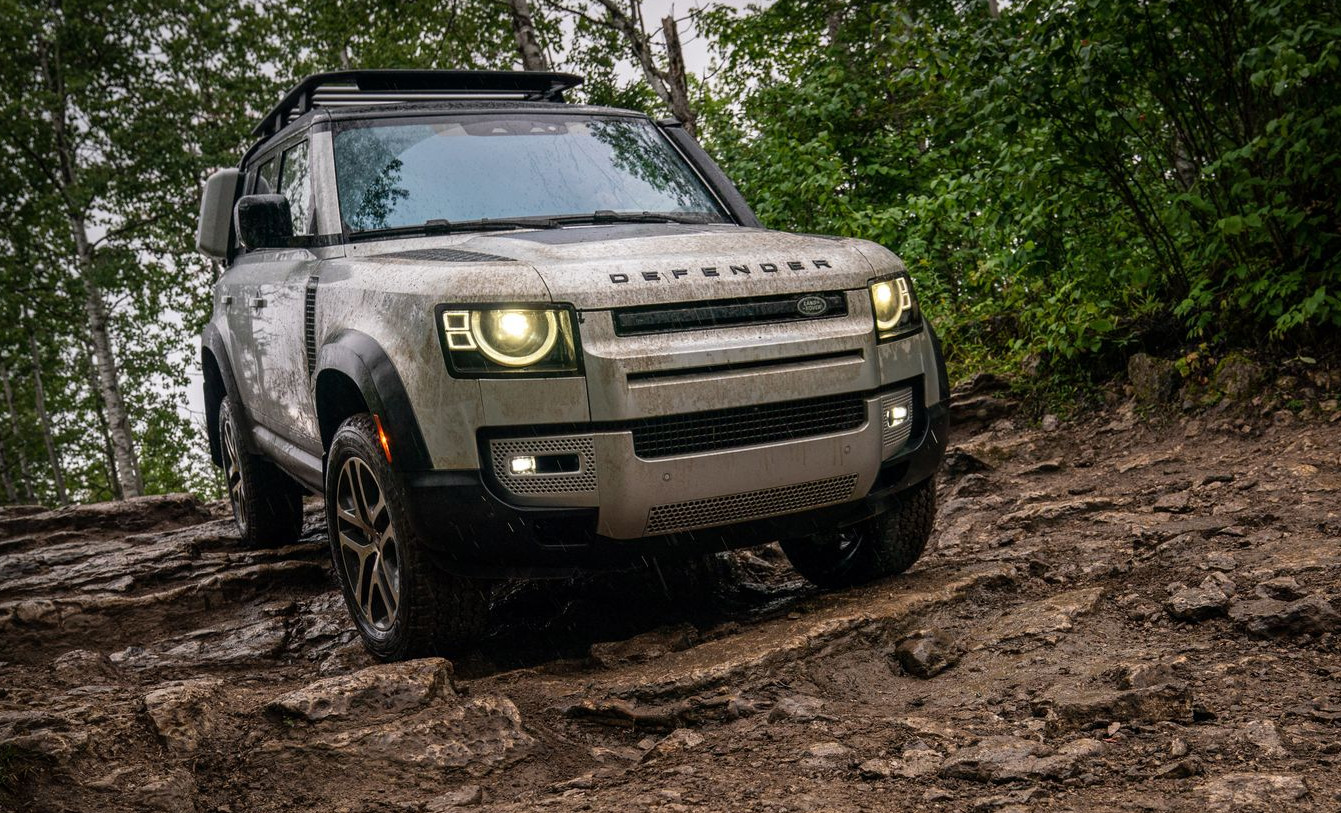 The Land Rover always has given us the impression of the wild outdoors and surprisingly, this car lives up to that expectation.

The ruggedness of the design is continuous from outside to inside. The design of Defender is made on Land Rover’s D7x architecture which is crafted with a unibody frame made of aluminum and high-stress steel. The overall shape is boxy yet modern so you can take this to a trip in the jungle or in more arid conditions like a desert. Pretty sure you’d drop your jaw at an incoming sandstorm and just watch how that dust will just strip away the paint from your car, but close it up because the bumper looks like a smug Transformer and he wants to let you know it’s just a breeze.

This is not just being figurative. The Land Rover Defender curb weighs at 5773 pounds and with the additional 7-passenger capacity; this may be good for a lifetime of heavy outdoor terrain drives. The engineers made sure that it can support a seven-ton load on top of its suspension. What’s also surprising is the engine displacement – at a 182.8 cubic inch, this is relatively light when you compare the massive housing it’s placed in. The weight distribution still allows climbs and downhill drives without toppling over. It’s that stable. The 11.5-inch clearance helps avoid rocks from doing damage to the underside, in addition to having the aluminum bash plates so it doesn’t dent the any of the fuel tanks or oil reservoirs. Or anything else. With that much weight and traction caused by the wheels, a pebble sent flying could probably leave a considerable mark on any of those areas. The roof rack also provides some storage space for your driftwood collection from your local forest park but remember to secure it with cables because it will simply fall off when going down a steep hill.

The hood houses a 3.0 liter inline-six + electric motor capable of an output of 395 hp and 406 lb-ft torque so it can push through mud, grass and rock. On a concrete pavement, it’s going to be a smooth drive as the 8-speed transmission responds well to shifts. The redline is marked at 6800 rpm which is not bad for a hefty SUV but the braking system is hard to get along with. There’s a slight delay after the initial pedal stroke and if you’re not strapped-in you may just find your faced pressed against the windshield. For that kind of performance, the fuel tank has to have a good capacity which is at 23.8 gallons. The manufacturers recommend running it on unleaded premium.

Moving from engine to interior, everything still shouts bold and powerful. The dash has chunky buttons and blocky stylized text. Everything should be proportional to the space used but it doesn’t hold true on the rear-end of the cabin. The dust colored trims inside are not just there for the consistent color scheme, it camouflages dirt that gets inside. Can’t argue if that’s a good thing or not, but it works well for an SUV that likes to get down and dirty. For ease of cleaning, the floor has a layer of plastic but it doesn’t have a drain and no slant so cleaning is needed after heavy use. The rear compartment is also made of plastic but it the manufacturing quality is questionable.

The seats are also configurable – the second and third rows can make way for extra luggage or the have all 7 people fit comfortably inside. Alpine lights at each side allow for some viewing pleasure while providing natural lighting and doesn’t appear intrusive to backseat passengers.

This is not to say the Defender only works well in rough, semi-dry terrain. Even in wet environments, the electronics still work well. Ultrasonic sensors below the mirrors monitor water surface level so that it can give notifications whether it’s going to allow you for a deep-dive or skinny-dipping although for the truly adventurous, it’s going to be useful to remember that the snorkel allows for a fording depth of 35.4 inches. You’re going to need air for that so when you get back to the surface the Defender also let’s you drive across rocky terrain like an adult skipping over Lego’s – you’re still going to be in one piece, albeit, shaken. When the air springs are fully-inflated, the frame doesn’t skid lower than what the suspension should drop to, if that ever happens.

In terms of serviceability, don’t expect much. There were a few reported problems with the Land Rover – the unresponsive satellite radio, camera systems failing, and a few other not-so critical manufacturing skips.  This might be due to problems with logistics as what the company claims to say but for a car made for heavy-duty, expect some long life out of the Land Rover Defender before it gives out (which we’re hoping would be a really long time).