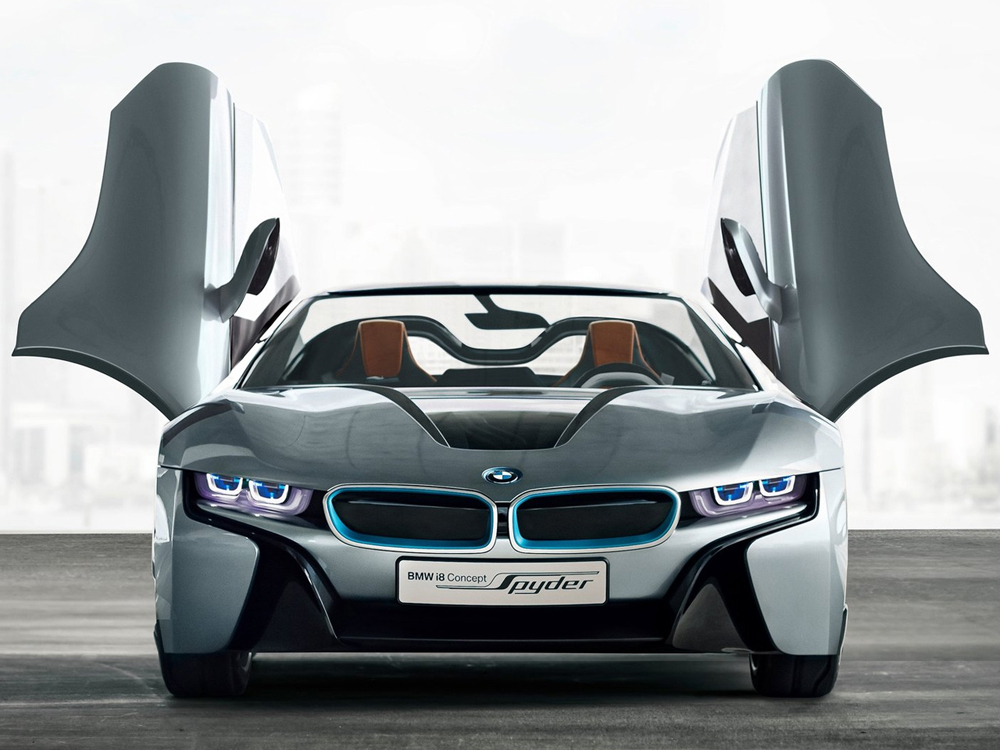 BMW is one of the most revered automakers in the world. It has produced some of the most popular cars such as the BMW 3-series and the BMW 1-series. However, one model that is making a lot of motoring enthusiasts giddy is the BMW i8 Spyder Concept.

The BMW i8 Spyder is still in the drawing board but it is already getting a lot of hype. According to industry sources, it is the car that would make any driver feel like Bruce Wayne. To say that the BMW i8 Spyder is gorgeous would be an understatement.

The BMW i8 Spyder is a hybrid electric sports car that the German automaker hopes to release in the next few years. Its electric motor and energy recovery system is the same hybrid petrol/electric powertrain that is used in the BMW i8, so the latter can provide a reference on how the i8 Spyder would perform on the road.

Both the i8 and the i8 Spyder have a combined 1.5 liter, 230 horsepower petrol engine with a 130 horsepower, electric motor car. The former drives the rear wheels while the latter is the one powering the front wheels. Overall, the i8s will have a total of 360 horsepower and a four-wheel drive.

The i8 can be plugged into a car charger to recharge. It can even generate electric power on the move, which were saved from braking and deceleration. When on pure electric mode, the i8 can give motorists a range of 23 miles with top speed at around 75 miles per hour.

When the driver activates the comfort mode, the car’s petrol engine kicks in at 37 miles per hour. The sport mode provides an excellent performance coupled with an engine growl.

In fact, a lot of motoring observers have compared the BMW i8 Spyder to the Batmobile because of the sleek design and futuristic features that it will reportedly have. Motorists who have long wanted to find out how Bruce Wayne feels like when driving the Batmobile could have their answers in the near future.

BMW will introduce the AirTouch, a new hand-waving technology that empowers intuitive control of navigation, communication, and navigation. It would allow motorists to operate the display in a vehicle like touchscreen but without having to make contact with the surface. Thus, every single button on the dashboard that you would find in most of today’s cars are nowhere to be found on the i8 Spyder.

The AirTouch has sensors that will record hand movements in an area between the interior mirror and central console. These sensors also allow drivers or passengers to change the focus on the surface of the panorama display.

There’s an AirTouch button concealed on the rim of the steering wheel. Drivers can easily reach it with a thumb. It lights up when an icon or menu is activated. A single tap is needed to activate a program or change a setting.

On the part of the passengers, there is also a button like this placed on the side sill in the door area. They can use one hand to navigate through the menu, and then the other hand to confirm inputs.

This set-up reduces the number of steps that both drivers and passengers need to take in making a selection. For instance, the system will automatically bring up a contact list to the top level and enable the passenger to make a call with just one action. It can also recognize which selection and control steps are needed, displaying them in advance. Drivers will find this system very helpful as they can concentrate on the road ahead.

The i8 Spyder will be an open-top, two-seater sportscar. It will have a carbon fiber-reinforced plastic body shell and a futuristic exterior.

However, it remains to be seen when the German automaker will start producing the concept car. The latest news is that production of the i8 Spyder won’t happen for at least two more years. One Australian publication had also reported that there won’t be an i8 Spyder that will be released to the market in 2016.

Part of the reason why BMW isn’t too pressured to produce the i8 Spyder is the good sales of the i8. The automaker had sold more than 2,000 units of the i8 in the United States, representing more than 400 percent increase from figures in 2014.