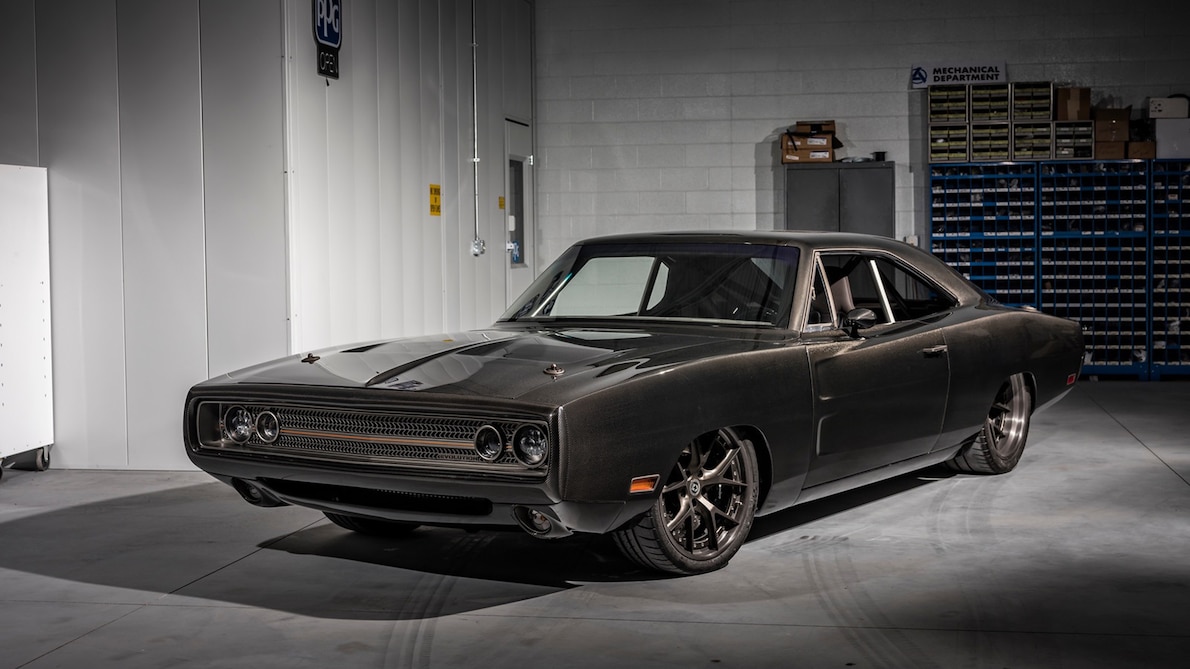 In the US, the love for muscle cars doesn’t go away. It flourishes in the hearts of car lovers for the rest of their lives, and later it’s passed on to the next generation. The Muscle Car Era peaked in 1970, and at the time there was the 1970 Dodge Charger. Today, that’s still a beloved car sought after by collectors.

But if you want something a bit different, then Speedkore has something for you. This tuner based in Wisconsin has built a 1970 Dodge Charger. But they’re adding the “Evolution” to its name because it has evolved from the original in one significant way: it’s made largely of carbon fiber.

Many car fans have several good reasons why they especially have a soft heart for carbon fiber. Obviously it looks great. But it’s not just the aesthetics alone. 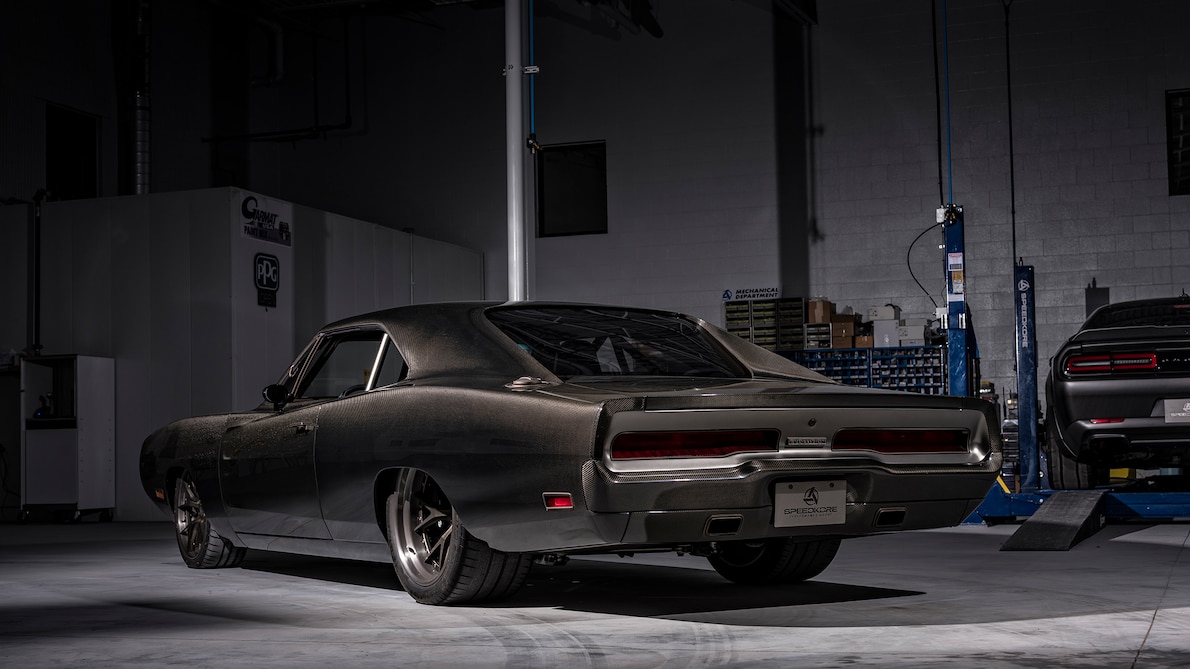 The main reason for the surge of carbon fiber’s popularity is that it is both lightweight and strong. It’s actually stronger than steel. Put this in the driveshaft and it’ll be 4 times as strong as steel. Yet it’s lighter than even aluminum by 40%.

That’s why almost the whole car is made of carbon fiber. Speedkore manufactured the body panels with carbon fiber, and so virtually the whole body structure is made from that material. You see carbon fiber in the roof, the quarter panels, doors, trunks, fenders, and hoods. It’s actually easier to list the parts that aren’t made from carbon fiber.

The main exceptions are the floors and the frame and roll cage. Carbon fiber isn’t ideal for those parts because carbon fiber tends to be brittle, unlike steel and aluminum which bend under pressure. So the floor of the car is made of string yet lightweight aluminum, while the steel frame and roll cage are all certainly strong enough.

In the end, Speedkore achieved their target weight of 3,200 pounds. In comparison, the original 1970 Dodge Charger 500 with the V8 engine weighed 3,228 pounds.

Here are some features that may have you drooling:

·         Speedkore’s plan was to combine the classic 1970s muscle car looks with the latest Dodge powerplant along with the newfangled carbon fiber material. That’s why they ended up installing the monstrous 6.2-liter supercharged V8 they got from the 2018 Dodge Challenger SRT Demon.

·         This V8 from the Demon already offered 840 HP, and for many that’s (more than) enough. But then for many muscle car lovers, there’s probably no such thing as too much horsepower. That’s why Speedkore made improvements here and there, and their dyno test showed that the Evolution’s engine can now offer a terrifying 966 HP output. That should give you all the acceleration you need.

·         Obviously, this much power means that you need to be confident that the car will stop when you step on the brakes. The Speedkore team took care of that by partnering with the wizards at Bembro to develop a custom braking system for the Evolution. This system has 15-inch drilled and slotted rotors, 6-piston front calipers, and 4-piston rear calipers.

·         This also features a double-adjustable coil-over suspension. This is eminently suitable for drag racing, by the way.

·         Other modifications include a full exhaust, custom headers, and a cold-air intake.

·         Forget automatic transmission for this baby. The engine is matched to Tremec T-56 6-speed manual transmission.

When you take a look at the 1970 Dodge Charger Evolution, it retains the look and the charm of the muscle cars of yore. Yet it doesn’t look dated at all. Perhaps it’s the use of the carbon fiber, but even at a glance you somehow sense that this has modern underpinnings hidden underneath the classic design. 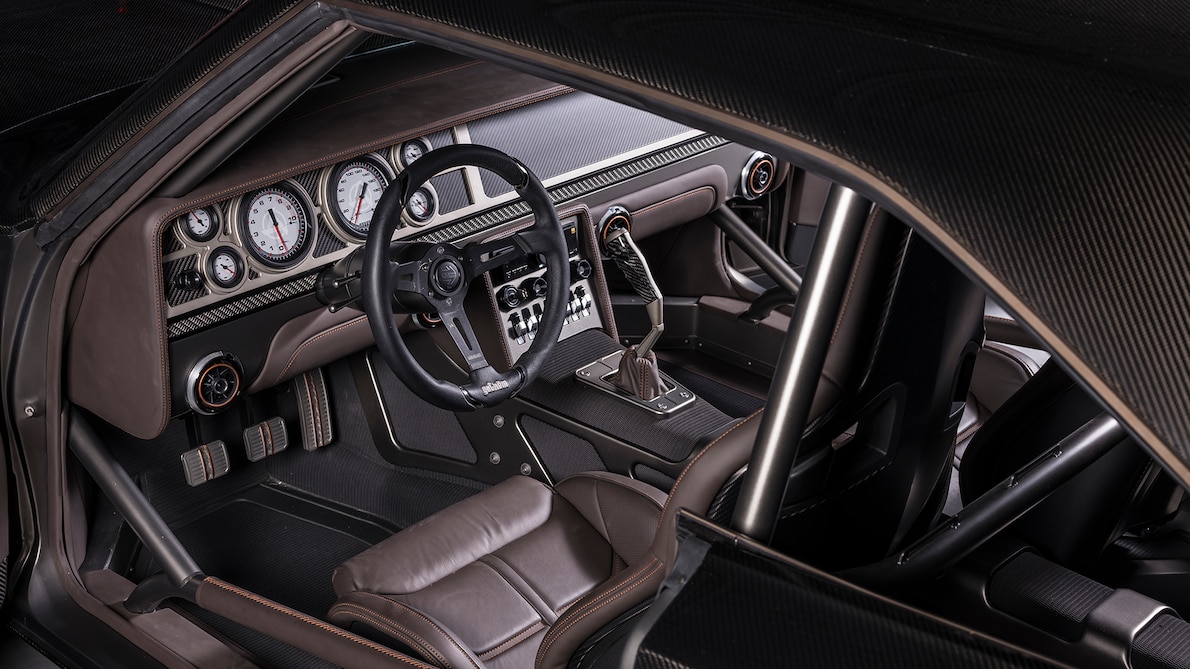 Get on the driver’s seat, and the sense of déjà vu is strong. The entire feel of the cabin is extremely traditional, and the dashboard design reinforces that feeling. Everything seems delightfully analog, with no touchscreen in sight. Instead, you’ve got the dials and buttons that you would have seen in the muscle cars of the old days. You may want to consider putting in a sound system, but then as is the car seems like a time machine.

That feeling of ancient technology does go away when you drive this. This seems like a sleeper, and a modern sports car driver may get the shock of their lives if they decide to race you on the highway. This muscle car is truly hardcore, and the 996 HP will give you all the thrills you’re looking for. It’s beautiful, and it’s capable.

The Best SUV in Every Market Niche