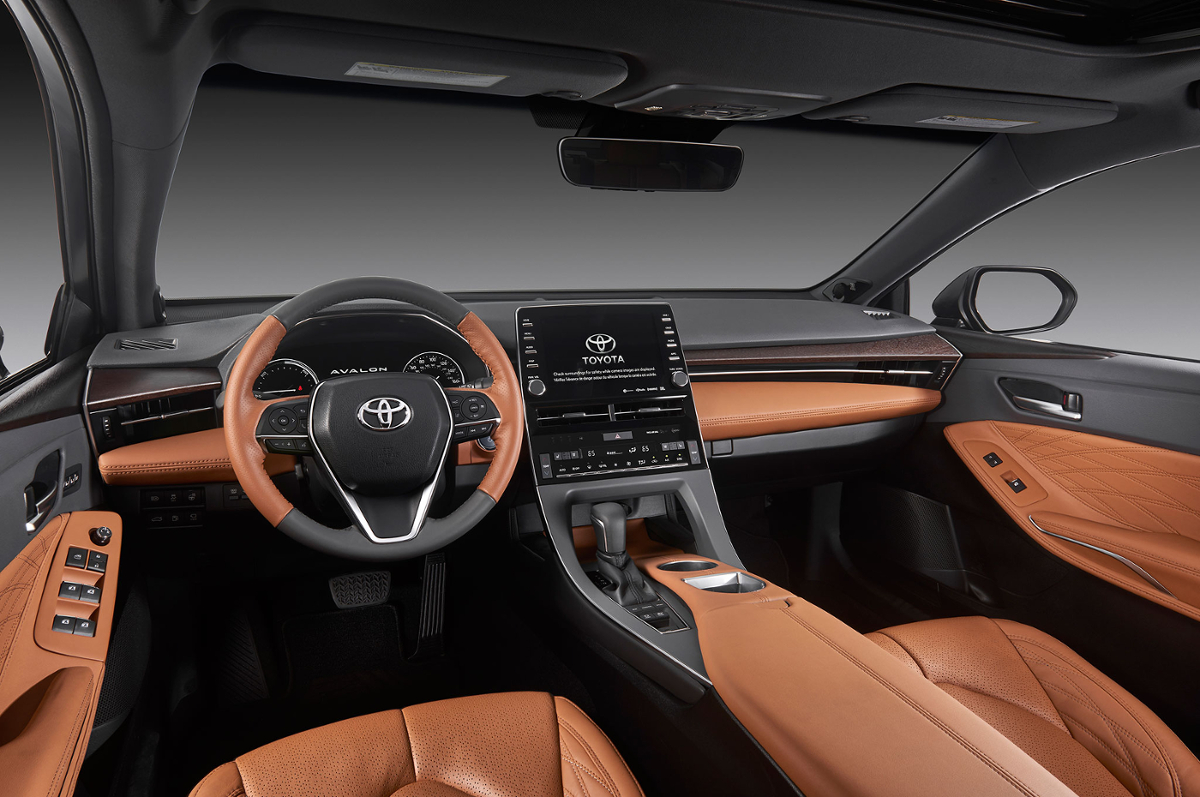 The Toyota Avalon has undergone an interior upgrade but is this better than its predecessors?

Toyota is well known for their economic, practical and stylish cars but with the Avalon line they’ve upped the ante even more. The company’s goal is to make the Avalon spacious and comfortable, and you’ll be hard pressed to find one that comes to this line in combining style with performance.

The entire car is a highlight, but let’s take a look at some of the interior’s best features. The gear stalk, instrument and steering wheel setup evokes the Camry, but the resemblance ends there. And it’s the interior makeover that makes the 2019 Avalon stand out.

The dash is a bit lower than the Camry and that contributes to the roominess feeling. The air vents are under the touchscreen so it’s spacious, and the console between the front passenger and the driver seat is a nice touch. The 9 inch touchscreen is atop the dash.

The 2019 Avalon Limited is fitted with genuine wood matte trim, giving it an impressive appearance. The Touring on the other hand, comes with aluminum trim to complement its sporty exteriors. The XSE trim also has aluminum trim while the base model is fitted with hydrographic trims.

Of the different trims here the wood is the most impressive to look at. Made of Sapele, Toyota chose this specifically because it fits in with their design as it curves and joins the dash so it looks continuous.

Soft touch surfaces is nothing new for the Avalon but it’s enhanced in the 2019 edition.  The materials are akin to leather, soft to the touch and goes from the lower area of the dash to the rear of the center console’s storage section.

This might not seem much but when you go for a drink on the cup holder the luxurious feel of the leather becomes apparent. Some plastic can be found here and there, but the major areas are made of soft leather-like trim. The bottom line is the surface feels good to touch.

The buttons are slick and silver, with the HVAC controls and those on the touchscreen the same. The matching style works together beautifully and gives the Avalon a unified look. Because it has up and down buttons rather than knobs it might take some getting used to, but it’s a nice addition.

The Avalon leather seat comes with a unique pattern that’s more randomized than what is found on the Touring version. Toyota actually considered a lot of patterns before settling on this for the Limited, and that tells how much thought went into its design.

The spots and patterns aside, what really matters is how comfortable you’ll be. The seat itself is a vivid tan that looks great on the steering wheel, dash trim and seats. All the seats are comfortable for long hours on the drive.

The Avalon still has the same trunk as the 2019 Hybrid down to the 16.1 cu ft of space. You get the same trunk no matter what engine you select and that really makes a big difference. There is no power closer or interior grab handle, but you do get a trunk open button that which opens the trunk quickly.

The Avalon line can be split into two. If you’re after a sports car look and driving experience, the choices are the Touring and XSE trims, but if you put emphasis on comfort then you’ll want to go with the Limited and XLE.

Every Avalon variant uses the TNGA platform which lowers the cabin NVH and makes the center of gravity lower than previous models. The TNGA also enhances handling even though it is half an inch longer and wider than its predecessor. The wheelbase is also two inches bigger, but it doesn’t have a negative effect on handling.

The Avalon drives smoothly despite its size, with excellent weight and pinpoint steering. The Limited and XLE are especially stable thanks to their suspension. The Touring model is fitted with 19 inch wheels and variable suspension so it feels different.

While the Touring is not as forgiving it’s more exciting and sportier when making tight turns and corners. The majority of the Avalon trims don’t make as much noise as the previous models even when running at full power. The V6 3.5L packs a lot of power, and the hybrid model has pretty good specs under the hood too.

The Avalon is a redesign but a lot of customers have lined up and willing to pay for this, and really if you’re looking for comfortable, roomy interiors then it’ll be worth every penny. Toyota has made a name for itself by manufacturing high quality cars and the Avalon cements that tradition.

Aston Martin Vantage – One of a Kind Coupe