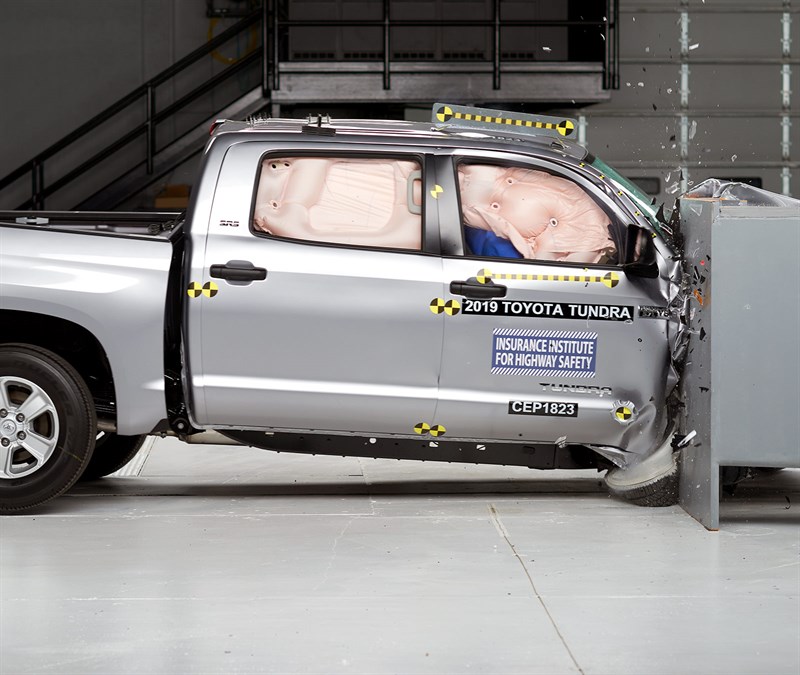 Sure, pickup trucks are big. That doesn’t mean they’re absolutely safe to drive and ride in. The IIHS crash tests reveal how safe these pickup trucks really are.

Pickup trucks are very popular in the US. They’re utilitarian, and what’s more they project this impression of machismo. They sure look like they’re very safe to ride in, especially in contrast with puny subcompacts with body work that seem to fold at the slightest touch.

But how safe are they, really? That’s the question recently studied by the Insurance Institute for Highway Safety. This organization has rather strict standards of safety, as insurers have to fork out a lot of money when vehicle aren’t as safe as they should be.

The IHHS took in a number of pickup trucks available in the US and then subjected them to various tests and inspections. As it turns out, they aren’t as safe as they ought to be. Only 3 pickup truck models got the top score for each of the crash tests, and they were denied the Top Safety Pick trophy because of a fundamental safety flaw.

The 2019 Ridgeline is the sole 2019 pickup truck for the US that the IIHS regards as its Top Safety Pick. That doesn’t mean it’s better than the other trucks in all the tests.

The Ridgeline only got an Acceptable rating for the passenger-side overlap test. In the small frontal overlap test on the passenger side, it was shown that the Nissan Titan, Ram 1500, and the Ford F-150 were all better than the Ridgeline. This is the test that crashes a quarter of the frontal area of the vehicle into a rigid barrier while running at 40 mph.

The Ford F-150 and the Ram 1500 actually did very well with all 6 of all the crash tests conducted by the IIHS. But these pickup trucks were denied the Top Safety Pick rating because their headlights were not bright enough. It doesn’t take a safety expert to realize how that flaw can be rather detrimental for the safety of the driver and passengers. Poor headlights don’t give drivers as much time to react to and avoid any potential incoming object or barrier.

The Titan also had the same problem as the F-150 and the Ram. The Titan aced all 6 of the crash tests, but then failed to get the Top Safety Pick rating because of its headlights weren’t bright enough either. Its headlights, like the Ram, were deemed merely Marginal.

What’s more, the Titan couldn’t really be eligible for that award because it’s lacking safety tech that the IIHS deems necessary these days. The Titan doesn’t offer automated emergency braking, and there’s no frontal-collision warning system either.

How Other Trucks Performed

While the Ford F-150, Nissan Titan, and the Ram 1500 all did very well for the passenger-side overlap test, the others weren’t all that impressive for this test.

The Toyota Tacoma did as well as Ridgeline, as both only received an Acceptable rating for this test.

The small Colorado and Canyon midsize trucks only got a low Marginal score for this test and the same goes for the bigger Chevrolet Silverado 1500 and GMC Sierra 1500.

The GM trucks did better with the passenger-side tests, but they also get a Poor rating for their body structure.

The Nissan Frontier got only a Marginal rating for the small-overlap tests for the passenger and driver side. It was able to garner an Acceptable rating for the seats and head restraints.

The IIHS considers the Toyota Tundra as one of the most unsafe pickup trucks the organization has tested. In the passenger side overlap test, it received a Poor score.

The IIHS test conductors put it very delicately by stating that the pickup was “seriously compromised by intruding structure.” That’s how a polite engineer will describe how it’s likely that in the event of crash, the cabin of the Tundra will compress around your body and cause serious injuries.

On the driver side of the frontal test, the Tundra only scored a bit better by getting a Marginal rating. The Tundra also proved to have the weakest roof strength among all the pickup trucks tested, and it received a Poor rating for body structure.

If you’re thinking that these road behemoths are the safest vehicles on the road, you better rethink that theory. You may be surprised when you buy a pickup like the Tundra and your insurance company decides to penalize you with higher premiums!

How Often Should You Change Your Oil?

What Do We Know about the Tesla Model Y?