You don’t need to be a genius to realize that SUVs have become popular again. Perhaps it is due to cheap gas prices that have made more motorists open up their wallets and buy the more expensive SUVs. Or possibly, the redesign of SUV models has attracted car buyers especially those looking for more space, off-road toughness, luxurious features and eye-catching exteriors.

The Mazda CX-5 and Subaru Forester are two SUV models that you can choose from if you are in the market for a small crossover. Both models are noted for their versatility, safety, and agility.

The Mazda CX-5 is one of the top rated SUVs, and it is easy to understand why. First, it has plenty of features that make it well suited to families and even single drivers. And it has excellent handling to boot.

The CX-5 is pretty new, having been introduced in 2013 as a replacement to the CX-7 crossover and the Mazda Tribute. It is now Mazda’s answer to the likes of the Honda CR-V, Nissan Rouge, and Toyota RAV4, and yes, the Forester.

The design of the CX-5 is typical of Mazda with oversized wheel arches and elevated window line. Inside the car, it looks classy with high-end leather seats and silver and red trimmings. 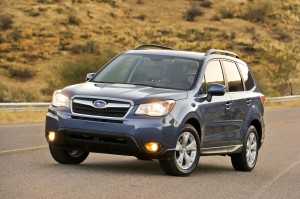 The 2015 Subaru has a few changes from the previous model, and this is quite understandable since the 2014 model went through an extensive redesign. There are two powertrain options—one is a 2.5 liter engine that produces 170 horsepower, while the other is a 2 liter direct injection turbo four.

There’s one thing that Subaru is proud about its Forester– safety. It is the only small SUV model that received a ‘good rating’ in the Insurance Institute for Highway Safety (IIHS) frontal crash test. Also, it is one of two cars that got a Top Safety Pick+ stamp of approval from the National Highway Traffic Safety Administration.

Putting the Mazda CX-5 and the Subaru Forester head-to-head, you’ll realize that the match-up between these two models is very close.

The CX-5 also has more horsepower than the Forester, so it is the better choice for people who would be using their SUVs for pulling heavy loads or transporting stuff. It also helps CX-5’s cause that it has a higher torque than the Forester, and the engine is able to transmit power to the wheels in a more effective manner.

The Mazda SUV also has more space at the back, thus rear passengers will have more leg room in the CX-5 than in the Subaru. But the Subaru has greater legroom and headroom up front, making it more ideal for tall drivers and passengers.

Both the CX-5 and the Forester can comfortably sit five adults. And there’s enough space at the back for bags, groceries, and other cargo.

The problem with the CX-5 is that it is wider than the Forester. It can be a challenge for drivers to park it compared to the Subaru SUV. The overall length is almost the same for the CX-5 and the Forester.

Maneuvering the Mazda CX-5 is also a bit more difficult than the Subaru Forester, no thanks to its larger turning radius.

It’s really a toss-up between these two SUVs. The CX-5 is slightly better when it comes to power and cargo space, but it is wider and bigger than the Subaru Forester thus making it more difficult to drive. Fuel efficiency ratings are also almost identical.

Perhaps you can make a conclusion that you would base your buying decision on your needs. If you need more space for your stuff then the CX-5 must be your choice. But if you’re after ease in driving, then the Forester is the model better suited for you.