The Subaru WRX Impreza and the Mitsubishi Lancer Evolution are two car models that have long been associated with each other, being the rally cars of their respective brands. It’s not surprising that motoring enthusiasts who like to drive a rally car often choose between the Impreza and the Lancer Evolution. This year, Subaru and Mitsubishi have released the latest versions of these models and it would be interesting to know, especially for car lovers, how this year’s Impreza measures up against the Lancer Evo.

In terms of performance, the Mitsubishi Lancer Evolution and Impreza are almost mirror-like images. The Impreza has a six-speed manual transmission and produces 305 horsepower. It can deliver sprints of up to 60 mph in just 4.7 seconds. On the other hand, the 4B11 T/C four-cylinder engine of the Evolution can pump out 291 horsepower. Its engine is so powerful that it can rocket the car up to 60 mph in just 4.5 seconds, or just .2 seconds faster than its rival.

Both the Evolution and Impreza also bring new features that make driving easier and safer.  For the Evolution, it has the multi-mode Super All-Wheel Control that delivers superior handling and self-indulgent drifting. The Evolution also has a twin clutch sport shift transmitting system that makes it easier for drivers to shift gears. Through this system, shifting gears won’t result to power loss, unlike in a conventional automatic sedan. The Evolution also has the active yaw control that adjusts the torque in between the posterior wheels for optimal stability and traction. 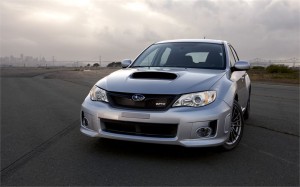 On the other hand, the Impreza boasts of an all-wheel drive system with driver controlled center differential consisting of three performance modes. It gives versatility to the car, enabling it to accelerate hard out of a turn with a 49/51 front-to-rear torque split for maximum traction. This is on top of the six manual locking-control settings. There is also the multi-mode vehicle dynamics control that gives the driver the choice of selecting stability levels and traction control.

Rally cars don’t have to be perceived as being accident-prone vehicles anymore with the Evolution and Impreza having advanced safety features. The Impreza, for one, has airbags and electronic safety systems that can ensure the well-being of drivers in the event of a crash.  It also has a tire pressure monitoring system, stability control, and brake assist that should make drivers and their passengers feel more secure during long drives.  The Impreza also has an antitheft security system with engine immobilizer lessening the risks of it being stolen.

The Evolution has security features that can also rival those of the Impreza.  It has seven standard airbags including a knee airbag for the person behind the wheel, and sport an anti-lock braking system with electronic brakeforce distribution. It also has an electronic engine immobilizer. It is also child-friendly with a restraint system and rear door locks.

Both the Impreza and the Evolution can seat up to five people, including the driver. The former has a steering wheel with functions for cruise control, Bluetooth connection and audio system. It has heated exterior mirrors and front seats. Entertainment onboard the car is enhanced with its premium stereo system with in-dash CD player, MP3 and WMA capability and iPod control compatibility.

Looking at the interiors of the Evolution, one of the first things an interested buyer will notice is the well-bolstered front seats that come with a sport fabric. The front seats can also be dressed with leather upholstery. There is also a 6-inch touchscreen that drivers and passengers can use to manipulate the integrated six-speaker audio system that includes high-definition radio and satellite radio. Like most modern sedans, the Evolution has an optional navigation system. Other impressive features of the Evolution inside are USB port, Bluetooth, and controls mounted on the steering wheel. 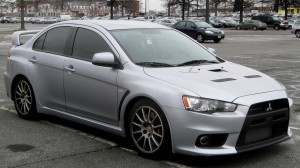 Mitsubishi is noted for redesigning and updating the look of its Lancer Evolution since it first came out in the market in 1994, and the latest incarnation is not exempted from this practice. The 2014 Evolution has an aluminum roof and body, with air vents that lessen the weight of the vehicle. The car makes use of 18-inch tires with the side vents strategically placed to enable air to flow freely to the wheel and vent heat from the engine section.

Meanwhile, the Impreza has aluminum alloy wheels and large rims that make the car look beautiful. Drivers will also love the extremely stylish exhausts, as well as the artificial vent on the bonnet that keeps the engine cool.

It’s hard to pick which is the better car between the Impreza and the Evolution. It is safe to say that it all comes down to personal preference. There is not much difference on the price tag as well because the Impreza and Evolution are both priced under the $20,000 range.