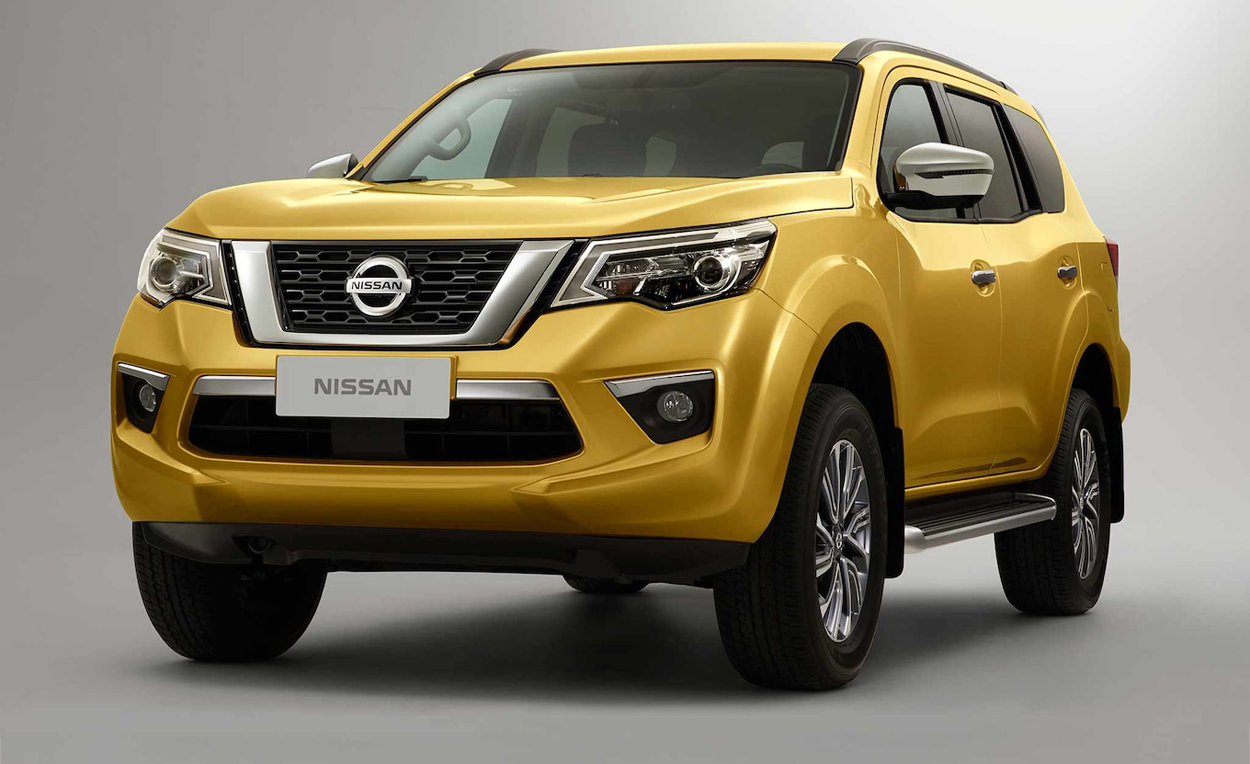 There has been a lot of speculation about the Nissan Terra SUV, what it looks like, when and where its debut will be. Nissan has answered many of those questions by officially releasing the first images of the Terra. According to reports, the SUV will be launched in April 2018 at the Beijing auto show.

The first thing that’s apparent is that the model looks nothing like the TeRRA that was shown in the Paris auto show in 2012. That vehicle was aimed at the youth, while the SUV resembles the Xterra in terms of appearance and style. The SUV Terra also makes use of the Navara chassis, so it is clearly in the mid size pickup category.

The Terra not only uses the Navara chassis though, as its styling also bears some similarities. Since the Navara isn’t available in the US consumers there may not be familiar with it however.

There is not a lot of information when it comes to the specs and features, but it will probably be similar to the Navara. The current Navara line comes with three inline four options: a 2.5 liter gas engine, a 2.5 and 2.3 liter diesel engines.  Any of these can be paired with a 6 sped manual or 7 speed automatic transmission depending on consumer preference.

If the Terra follows the Navara models it will have two versions available, a 2 and 4 wheel drive. While this is speculation at this point, it should not be surprising if this happens since the Renault Alaskan and Mercedes-Benz X Class pickups are based on it.

Putting together a new SUV that is based on another model is nothing new, and Nissan will not be the first company to do this if ever. The trend for SUVs – just like with cars – is improve fuel mileage and lower the weight. For this reason it makes sense to adopt the style of a successful model.

Launching a body on frame SUV in China is a sound strategy according to analysts as demand for these vehicles is on the rise. Nissan is aware of this and that is why the company is heavily invested in this. Nissan is so confident that by 2022, they expect an increase in these vehicle sales by 40%.

While demand for mid size pickups is on the rise, some observers believe a 40% increase will be a challenge. Whatever the end results may be, there is little reason to doubt the Terra will do well in Beijing after its debut.

Once the Terra has been unveiled in China it will become available in other Asian markets. It should also not come as a surprise if the Terra quickly becomes available in the US as well. While the official debut is still a month or so away, the initial reaction has been positive.

Since the Terra was unveiled and the first official photos released, it has become evident that this will play a major role in the company’s medium term plan. The Terra is the heir apparent to the Pathfinder. Whereas the Pathfinder looked more like a car, the Terra sports a more rugged built.

According to Nissan’s frame and light commercial vehicle business senior vice president Ashwani Gupta, the Terra is built with practicality in mind. It is also designed for those who are always on the go and need a dependable ride. Gupta also confirmed that the Terra will be available in other markets following China.

Gupta also expressed confidence that Nissan will be able match its target growth. According to Gupta, there is a growing demand for the Nissan frame. He also confirmed the Terra is just one of the many products in their lineup, and that this is in accordance with their plans.

Industry analysts say it is an ambitious plan, but there is every reason for Nissan to feel confident. During a press briefing in Australia, company representatives bared that the Terra has the capabilities of a real 4WD. This extra power and functionality is another reason why the Terra differs from the Pathfinder and the X Trail.

One of the questions that has been asked is why Nissan is going for a frame on SUV. According to the company, this is because of its power and drive. Based on reports, the Terra may have the dual turbo power of the Navara and have seven seats. Pedro de Anda, Nissan chief product specialist for light commercial vehicles, says the Terra a was developed for those who don’t want to compromise.

No matter where the Terra will be released in the other markets, one thing seems clear. This is one SUV that will provide a lot of competition against the Mitsubishi Pajero Sport, the Toyota Fortuner and the Ford Everest.

Fiat Chrysler to Get Rid of Car Diesel Engines by 2022