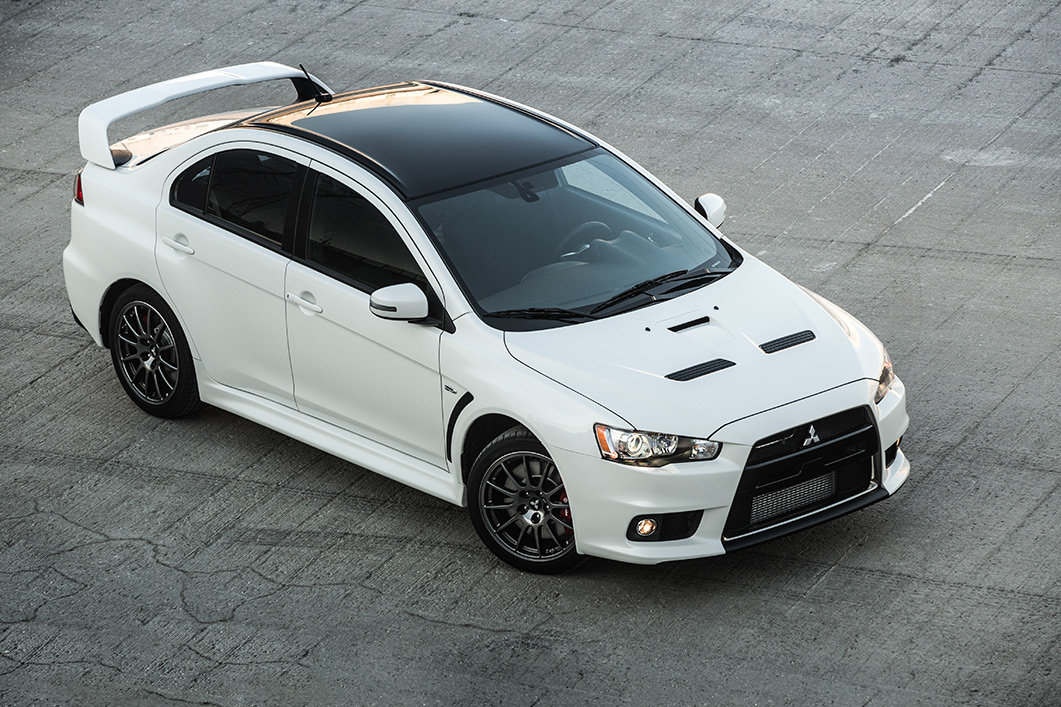 Just recently, the last of the 2015 Mitsubishi Evolution “Final Edition” sold on eBay. The winning bid was for $76,400 which was a little bit more than twice the suggested retail price of $37,995. Perhaps this high price was because this really was the last Evolution in the literal sense. It was build number 1600, and Mitsubishi only made 1,600 of the Final Edition model.

Of course, that didn’t quite account for the last 1,000 Evolution units earmarked for its Japan home market. But at least the US edition was better. It had 12 more horses under the hood at 303 HP, and it even had an extra 5 lb-ft of torque.

This model also had Eibach springs and Bilstein dampers at every corner, plus 2-piece Brembo brake rotors at the front.

The Legend of the Mitsubishi Evo

The basic principle of the Mitsubishi Evolution is quite simple. Use the Mitsubishi Lancer chassis, get a 2-liter 4-cylinder engine, and put in a turbocharger to really boost the horsepower and torque. Those Mitsubishi engineers sure knew what they were doing, since some variants of the Evo were able to have more than 400 HP—while still with a 2-liter engine.

That 2.0L limitation was because of Rally rules, by that’s okay for the engineers, they could make do. In a straight line, some Evos were even able to go from standstill to 60mph in an unbelievable 4.4 seconds.

But that’s not all. In fact, the Evo is more famous for its ability to go through curves like it is on rails. That’s because of a super-sophisticated all-wheel drive system that’s equipped with lots of advanced electronic nannies. It’s as if you really must intend to crash the car if you want to get into an “accident”. It’s that good.

It’s so good that many found it just about the most fun in a car you can ever have, when you’re driving and not with some backseat shenanigans. You can get into a lot of excellent maneuvers with this car, and in some ways it’s almost cartoonish.

Even Top Gear had it keeping distance with a Lamborghini Murcielago, which had 3 times the engine size, 3 times the number of cylinders, and 3 times the cost. In other words, it’s an affordable road rocket.

“Cartoonish” is also how you may describe how it looks. It’s not subtle or elegant at all. With its oft-times huge wing and in-your-face hood vents, it looks like it’s about to transform into one of Optimus Prime’s Autobot minions, about to face the monstrous Decepticons. And the sound the engine makes is quite brash too.

Thus, from the 1990s up to the early years of the new century, the legend of the Evo grew. Its fan base increased with its appearance not just on YouTube and social media videos, but also in the Fast & Furious franchise and also in automotive video games. Its rivalry with the Subaru WRX STI also made it notorious as well.

The Evo is all about performance. Get inside, and you’ll see an interior so tacky that you’ll feel embarrassed for the car. Everything you’ll see will seem like everything’s on the cheap.

This is especially true in the RS variant. The Evo has the basic GSR variant, and then the most luxurious (for lack of a better word) is the MR trim. The RS is the barebones trim, and the designers sure do take the definition of barebones seriously. Even some of the later RS models had windup windows, no sound proofing, and no sound system. And even air conditioning was optional.

Even the vaunted Final Edition didn’t have a navigation system. And since the price was often north of 40K, the lack of creature comforts just didn’t make sense.

Using this as a daily driver just didn’t make sense either. It guzzled gasoline like you wouldn’t believe, as it required premium gasoline and it offered just about 19 mpg. Lots of people couldn’t handle the clutch properly so the motor kept dying on them. And the turning radius is ridiculous—making a U-turn on a regular road may be impossible.

Still, all these things were part of its charm. You have a car that went fast even in deadly curves, and that’s it. All other considerations fell by the wayside.

So why did the Evolution die off? It’s simple, really. It’s just that Mitsubishi has been having problems with its sales figures for quite a while now. So it’s not really “fiscally responsible” to go on to design a new flagship performance vehicle to replace the decade-old design of the Evo X.

But then again, the Evolution was never about fiscal responsibility. It’s about fun on the road, based on performance alone and not on comfort and accessories. Alas, the Evo is no more, so you’ll have to make do with the WRX STI. Thanks for the memories, Mitsubishi!

The Best That Weren’t Bestsellers: The Best Cars That Didn’t Sell