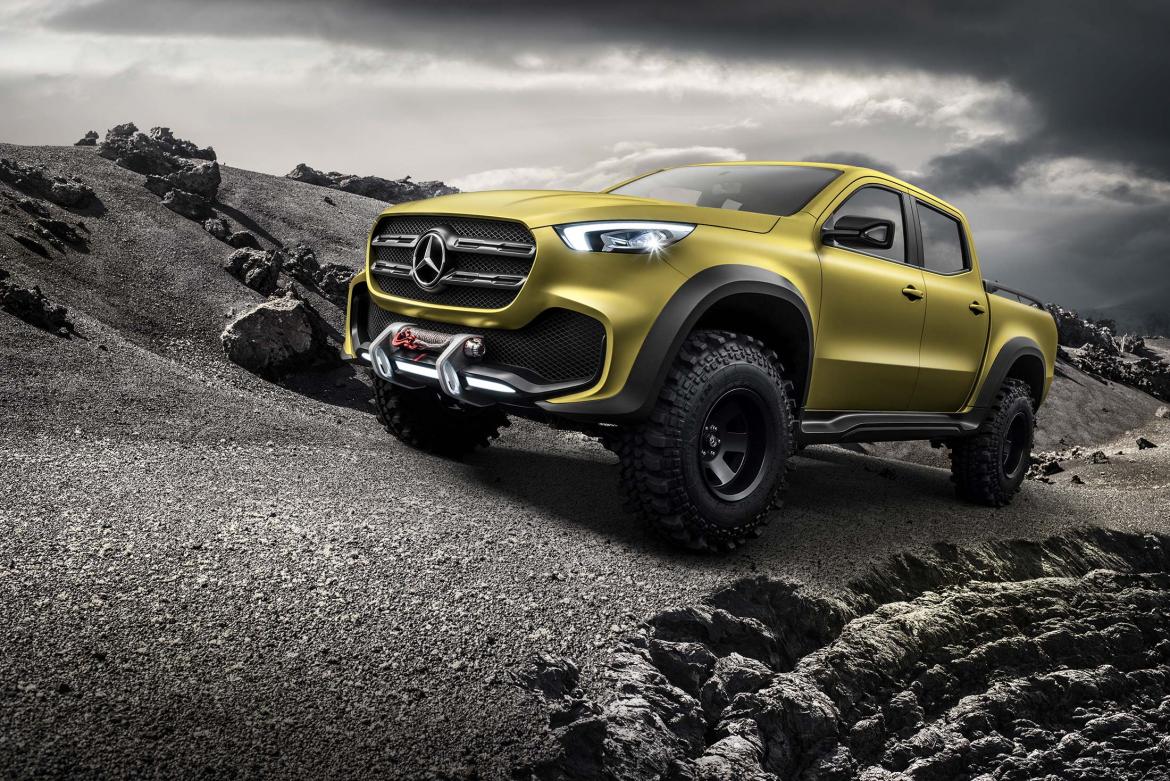 The SUV was once an off-road beast you can bring anywhere, and it’s now the urban cruiser of choice for lots of families with luxury brands getting in on the action. The pickup, the preferred workhorse vehicle for rugged manly men, seems to be starting on that same transformation, because Mercedes-Benz has just released its own version of the pickup truck.

No, it’s not an “alternative fact” at all. It has actually happened. Mercedes-Benz now offers what it calls the Concept X-class pickup truck that’s based on the Nissan Navara. It will enter the highly competitive midsize pickup truck segment, and it offers 2 different entries. It’s easy enough to tell them apart by their names, as they’re called the Stylish Explorer and the Powerful Adventurer.

Note that the adjectives we used were capitalized. Those aren’t typos. Those adjectives are really part of the names of the pickup truck.

At least we know which is which by the names. As expected, the Stylish Explorer is all about looking sophisticated looks. It was first seen in white, and the overall first impression immediate tells you that its looks seem like it’s the priority in its design.

Of course, it is still a pickup truck, and it is Mercedes-Benz. You can still rely on their engineers putting in a lot of work on the truck so that it doesn’t just look like a pickup truck. Despite the trendy aesthetic touches, it can still do the work you can expect from a real pickup truck.

According to Mercedes-Benz, all their production pickups in the X-class series will use body-on-frame construction. That means you can put in stuff in the bed that can weigh up to a total of 2200 pounds, just in case you actually use this for jobs such as moving furniture, equipment, tools, and appliances. You can even have it tow other vehicles weighing 7,000 pounds at the most. The job is made easier because the 6-cylinder engine offers lots of torque, while the 4-wheel drive system comes with a transfer case that distributes the engine power to the front and rear axles, along with 2 differential locks so you still get the grip you need.

Still, it looks like the sort of vehicle that some posh dude would bring to watch a polo match of his peers. It’s not a pickup truck that hauls grounds-keeping equipment. Tin front, it resembles the looks of Mercedes SUVs. It sports 22-inch wheels and it also comes with an LED taillight strip.

While the Stylish Explorer accentuates its classy appearance, the Powerful Adventurer’s look emphasizes its rugged nature. If the Stylish Explorer is James Bond in a suit, the Powerful Adventurer is like a professional wrestler dressed as a lumberjack. This is a more utilitarian look, although of course as it’s Mercedes-Benz it can’t help putting in classy design that indicate that this is just more expensive than your average pickup truck.

The front-end design of the Powerful Adventurer looks a lot rougher, and it even includes a winch to tell everyone that it’s meant for rough jobs. It also showcases hefty 35-inch tires and bulky black fender flares. With its raised suspension, it sure does seem intimidating with its huge size and 75-inch height.

It’s obvious that the Powerful Adventurer wants to really highlight its utilitarian nature, though of course such ruggedness in its looks offers a statement on its own.

Inside, the cabins share the same traits as the look on the outside. So in the Stylish Explorer you have an emphasis on classy details, while on the Powerful Adventure its focus is more on practicality rather than plushness. Of course, again we can’t forget that these are Mercedes-Benz vehicles. In fact, they’re called the first premium pickup trucks in the mid-size pickup truck segment.

However, a closer look at some of the interior details indicates that Mercedes-Benz appropriated parts that you can see in other models. These parts include the multimedia screen and the COMAND controller, along with the HVAC vents and the steering wheel.

The X-class is slated to come out in late 2017 for Europe, Latin and South America, Africa, and Australia. There’s no indication that it will be released in Asia, although plans are being discussed for a US release.

According to various reports, Mercedes-Benz is quite aware that there’s a significant US demand for the X-class. Unfortunately, the current X-Class production facility in Argentina doesn’t have the ability to churn out enough units to meet the high level of US demand. This means that a facility may have to be built first in the US.

The Mercedes-Maybach S600 Pullman Guard: Riding Around in Premium Luxury and Complete Safety