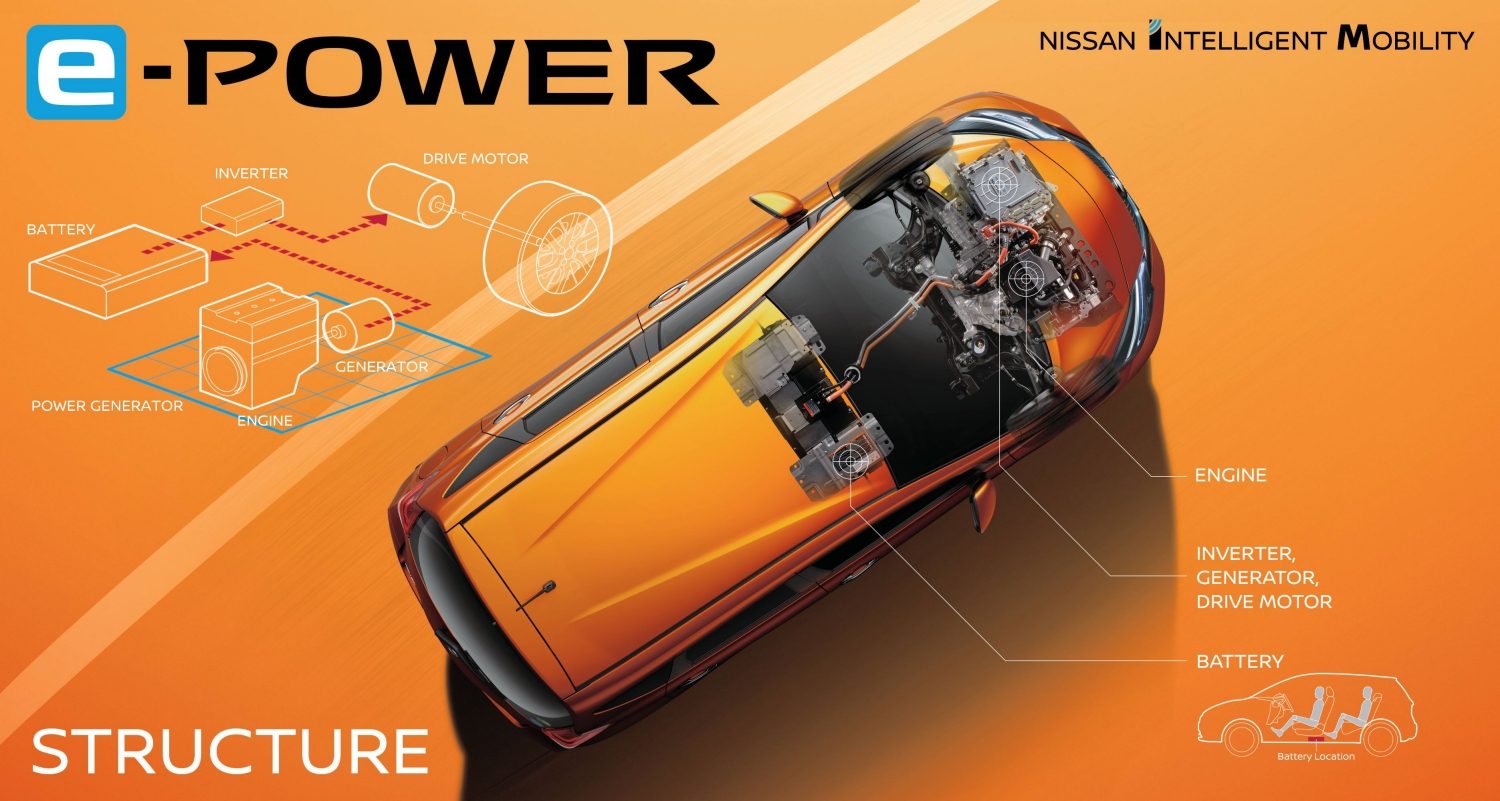 With the Leaf, Nissan shows that it’s serious about its commitment and faith in the rise of electric cars. Curiously, the brand isn’t quite as fervent in its participation in the hybrid niche. That’s about to change with e-Power, the new hybrid system from Nissan.

This new system signals a change in Nissan’s attitude to the hybrid model, at least for the small car models offered by the brand. Sure, Nissan came up with the Nissan Altima hybrid, which actually uses the Hybrid Synergy Drive they licensed from Toyota.

But after that, there weren’t all that much for Nissan to brag about in the hybrid niche. They only came out with a handful of utility and crossover cars with single-motor CVT hybrid systems. There were all significantly unimpressive, to say the least, and it show the brand’s lackluster interest.

Not they’re seemingly abandoning this apathetic participation with a more wholehearted approach to hybridization. The new hybrid powertrain will be available in their new Nissan Note, and the variant is called the Note e-Power. According to Nissan officials, it’s the first time that a series hybrid system will be seen on a mass-produced compact car.

Benefits of the New Note Powertrain

In the e-Power system, the electric motor is wholly responsible for driving the wheels. The new system includes a compact 1.2-Liter 3-cylinder gasoline engine that’s matched to a power generator and inverter. You won’t find any charge port here. This e-Power system, says Nissan experts, will give you the same driving experience that you’ll get from a fully electric car. It’s just that with the Note, the battery is just 1/20 of the size of the Leaf battery.

The simplicity of the powertrain layout offers several notable advantages. If you’re not aiming to squeeze the last drop of power from the engine, then the new powertrain will operate much more quietly than other hybrid layouts. Of course, in some cases that’s not so beneficial, as you may have pedestrians unaware of your approach when you cross the streets.

The other benefit is that driving the Note hybrid feels much like driving a fully battery-operated car when you’re driving in the city. You get the huge torque almost immediately, but you don’t have to endure the long and tedious charging time needed for most of these electric batteries. There’s no charging port because the gasoline engine charges the electric battery.

The e-Power technology is fully in line with Nissan’s overall fuel-cell program. It’s a main component of the Nissan Intelligent Mobility platform. This is the brand’s long-term vision of how cars with self-driving features and zero emissions can be introduced and integrated to mainstream society.

How Does It Work?

To understand this, let’s take a look at how a fully electric vehicle works. Here you have a battery, and the inverter takes the power from the battery to the motor, which then drives the wheels of the car. It’s simple, though you’re entirely reliant on battery power and that means constant recharging.

A conventional hybrid works by offering either a low-output fuel motor or an electric motor to power the wheels. The inverter for the electric motor can get power either from the battery, or the power generator of the fuel engine. So here the battery still needs to be recharged regularly.

That’s not how it goes in the new Note, because you don’t need to plug in the battery at all. You get the layout of the fully electric vehicle, but this time there’s a high-output engine and a power generator that sends power to the battery itself. It doesn’t send the power to the inverter directly.

It’s expected that this new approach to hybrid would be great for city driving. The instantaneous power will by very suitable for stop-start driving common with traffic jams and stoplights, but the use of the battery can offer rather significant fuel savings.

The benefits for highway driving, however, may not be all that great. Honda did try to use this type of series 0 hybird system, but apparently the results weren’t much to their liking. Honda eventually went for a more complicated clutch-pack system for the Accord hybrid, which uses an offered Engine Drive mode so the engine can lock to the wheels so the speed remains steady during highway cruising.

US Availability and Other Options

So far, there hasn’t been any word from Nissan regarding the use of the e-Power system for Nissan cars bound for the US. It’s only available in the Note subcompact mode that’s available abroad, and that’s a different model from the Versa Note that can be found in the US.

The availability of the e-Power system also doesn’t mean that Nissan is abandoning the CVT hybrid system. It will show up again in the 2017 Rogue Hybrid, and this time it comes with a more powerful electric motor and more all-electric operation modes.

Europe all set to embrace the 6th generation Polo