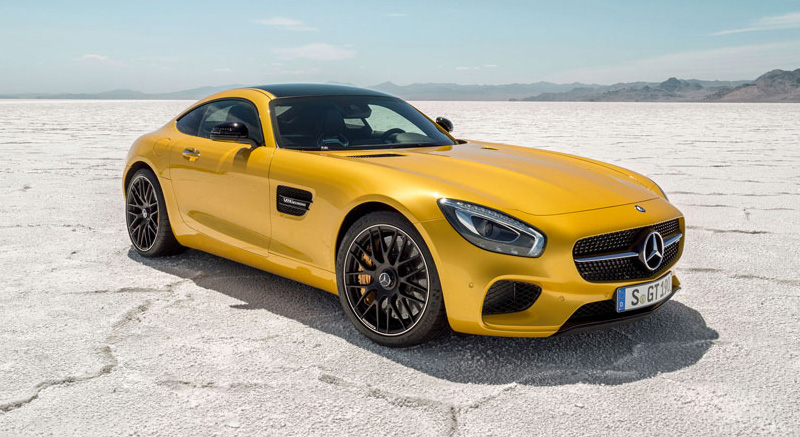 The all new 2016 Mercedes-AMG GT S is finally here and it is set to win a lot of buyers as it displays its beauty in showrooms this 2015 to the demise of its competitor, the Porsche 911.

This coupe is not just about its looks although Mercedes hit this spot perfectly but also performance where this car is sure to make a lot of noise in the coming months as more and more people experience what it is really made of. Read on and get into the excitement of the AMG GT S.

The Mercedes-AMG GT S is one beautiful car to behold. It has masculine features – sleek lines on every corner but also integrates feminine subtlety with its rounded curves on the front and back. Although the car opts for the non-gullwing door design seen on its predecessor, this car makes up for it with its other amazing design elements. The coupe has a low profile, wider by 16” compared to its height. This is not only making the car look good but also readies it to tackle the road with both finesse and aggression.

The long nose and wheel base of the GT S allows the mid-engine car to distribute its weight better for those speedy cornering. The rear tires are 11” wide and 20” tall, while the front tires are 9” wide and 19 inches tall, allowing the car to have a very low stance, improving its grip on the road especially in high speeds. Every design decision of this car is more than just aesthetics which adds to its appeal. It is a car made to deliver promises in terms of performance.

The Mercedes-AMG GT S engine is what makes it stand out from the rest of its class. There is of course other cars which can boast more horsepower, but the innovation behind the AMG GT S’ powerhouse is what makes it especially impressive. The car has a direct injection 4.0 L V8 biturbo engine that is capable of producing 503 horsepower with 479 ib-ft of torque. Now the innovation comes in – the biturbo of the engine is placed inside the V of the engine allowing it to hit 1,750 rpm. That is some serious torque that should give the engine more punch than its conventional specs.

This biturbo is responsible for the cars impressive acceleration of 0-60 mph in just 3 seconds. The car’s top speed is gauged at 193 mph. Not bad at all. The engine is merged with a 7-speed dual-clutch automatic transmission that also comes with an electronically controlled limited slip differential. All of these allow the driver to have the speed and complete control of the car. This guarantees a smooth, easy drive even in very high speeds. The car can go for 16 mpg in the city and 22 mpg in the open highway not exactly a fuel efficient car.

If the Mercedes-AMG GT S looks great on the outside then ready yourself to be impressed more with its well designed interior. Mercedes sees the interior as part of their aviation design theme which has a wing-like dashboard that connotes power and efficiency. But do not be fooled by the fancy looks.

The dashboard and the center console are again, an attempt to marry aesthetics with function and performance. The dash has four spotlight type vents. On top of the vents seats the 8.4 inch screen that also controls the car’s COMAND system. This screen displays the rear camera view, a means to address the car’s poor rear visibility. The steering wheel is flat-bottomed making it a pleasure to use with the wheel-mounted paddle shifters.

On the wide center console are 8 buttons that controls a lot of the car’s functions. One of those is the dynamic select knob that has five performance options – the “race” (turns off all safety features allowing the driver to harness the monstrous raw power of the engine), “sport”, “sport plus”, and the “C mode” (default setting for the car which translates to controlled efficiency). The other buttons are for lowering the suspension, opening the exhaust, and for starting the engine.

The Mercedes-AMG GT S is lighter than it looks thanks to its 93% aluminum body. But to ensure strength the front module is made of magnesium. The car is estimated to weigh around 3600 pounds total. The safety features of the car are impressive. It boasts a collision prevention assist system that is also coupled with adaptive braking technology. It also has attention assist that helps driver to be always informed while on the road.

The PARKTRONIC feature allows for effortless parking which is complimented with a rearview camera. The car also has the pre-safe system and the optional lane keeping assist and the blind spot assist.

The New Scion iA: A Car That Is Made To Impress