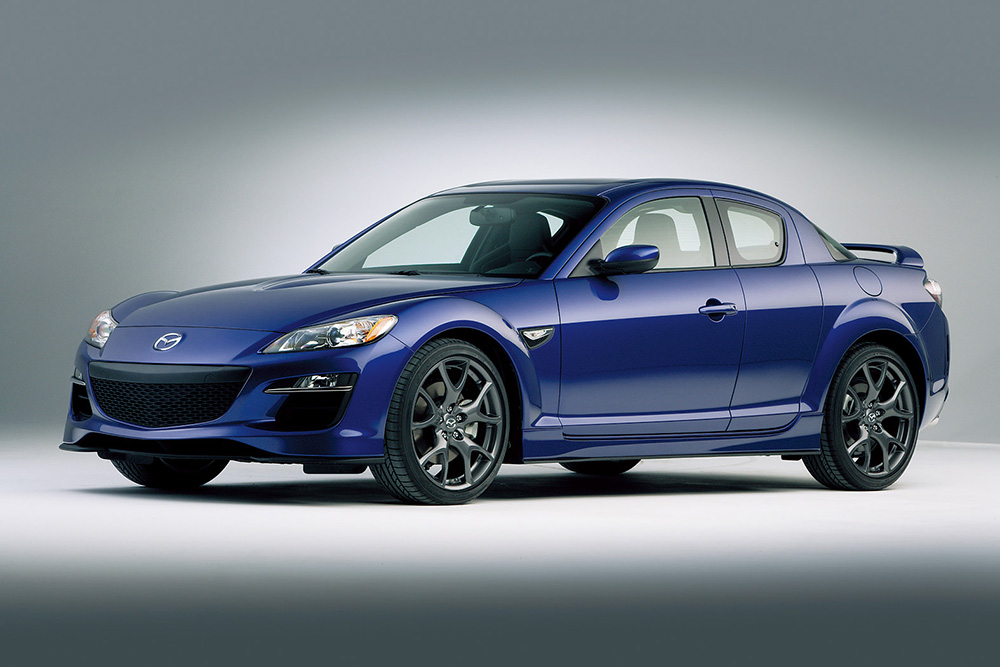 The Mazda RX8 is a 2-door quad coupe sports car that was built by Mazda Motor Corporation. The car made its first appearance in 2001 during the North American International Auto Show and was hailed as the successor to the RX7. Following its appearance in 2001, the company began distributing the car worldwide, powered by a 1.3 L RENESIS (Wankel) engine and different types of transmissions including 4 and 6-speed automatic, 5-speed manual and 6-speed manual.

Since the Mazda RX8 came out in the market, several generations have been released. The first generation models from 2003 to 2008 include the Shinka, Evolve, PZ, Nemesis, Kuro, a 40th Anniversary edition, the Hydrogen RE and the NR-A. The second generation from 2009 to 2012 includes the R3 and the Spirit R.

The second generation models had marked improvements in body rigidity by the use of structural fortifications such as the trapezoidal shock tower brace and improving the front suspension tower’s local rigidity. Furthermore, the rear suspension geometry was redesigned so it could handle better. The engineers also changed the final drive gear ratio from 4.444 to 4.777 so off the line performance could be enhanced. Although these changes seem trivial at first, they went a long way towards improving the RX8’s performance and acceleration, aside from the fact that the changes helped improve accelerator pedal responsiveness. 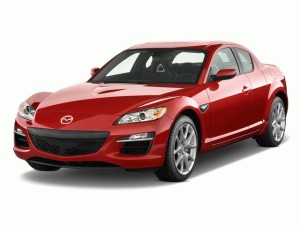 The second generation RX8 also underwent design refinements, giving it a different and fresh new look without totally overhauling the theme of the original. Beginning 2009, the cars have a more striking rear and front bumper, and the front fascia has been updated as well. The second generation RX8 also has high end rear and front headlamps and bigger exhaust pipes measuring 3.5 inches across. In addition to these, the 2009 RX8 models have five-spoke wheels with a design similar to the rotary engine.

The R3 RX8 came out in 2009 and is notable for its enhanced suspension, made possible by the addition of Bilstein shock absorbers and a crossmember filled with foam so there’s greater rigidity. Aside from the improved suspension, the R3 also has high performance tires and wheels made of 19-inch forged aluminum-alloy. The R3’s exterior was also improved and features a standard rear spoiler, lower side sills and a front bumper with a splitter. The R3 also comes with a couple of Recaro seats, while the 300w Bose audio system keyless entry and Bluetooth are still available.

The Spirit on the other hand, was a special edition of the RX8 that was released in Japan. Only 2000 units were made available, and the Rx8 Spirit was outfitted with a front side SRS airbag system, black transmission trim and rear and front red brake calipers. The Spirit manual transmission edition had Recaro bucket seats, 19-inch bronze alloy wheels and 225/40R19 89W tires.

The automatic transmission model meanwhile, were furnished with black leather seats with red stitching and a steering wheel encased in a leather design similar to the seats. In addition, the automatic transmission models also have a center console box, also sporting the same leather design as the seats and steering wheel. The Spirit is also available in several colors including Crystal White Pearl Mica, Sparkling Black Mica and Aluminum Metallic.

The RX8 has also been used extensively in races by privateers, and it has done remarkably well too. Probably the most significant of these were the victories in the 2008 and 2010 24 Hours of Daytona GT class. The 2010 victory is also notable for being the 23rd triumph of a car in the event that was powered by Mazda. Other racing events in which the RX8 has participated in include the Formula Women series in 2004 and the KONI Challenge Series. The RX8 has also taken part in several Britcar endurance racing events.

On August 23, 2011, Mazda announced that the RX8 was going to be discontinued and that the 2011 model was to be the last in the line. Also, the RX8 was taken out of the European market because it was unable to comply with the emission standards they have set. But while the RX8 has been discontinued, Mazda is already busy working on a replacement, although details are still not clear right now. However, it is widely believed that the next generation model will be lighter, smaller and yet more powerful. Though nothing is definite, it’s been said that the Sky R could be the successor to the RX8.

Facts About the BMW M5

Everything You Should Know About the Bugatti Veyron