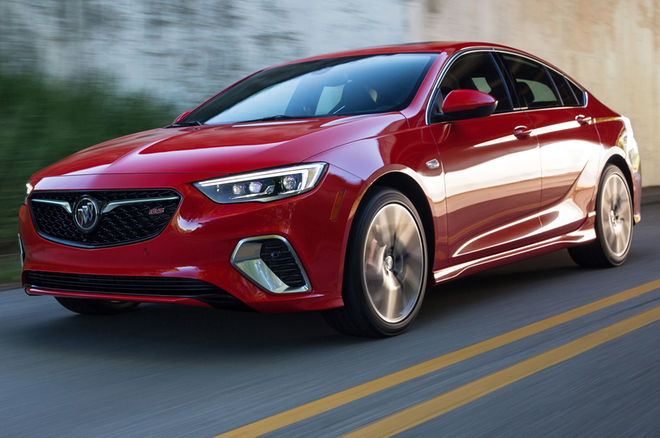 A wagonload of auto-enthusiasts knew that it was coming. Buick has officially launched the performance specific version of their midsize Regal, which hits the market later this year. Blessed with an all new V-6, the Regal GS would cost its buyers a price of $39,990.

Keeping the GS as the performance oriented and highest-priced Regal in its lineup plays an important role for the luxury brand Buick, according to one of the top executives of the company, who admitted that the GS will serve as a pure temptation to pull the potential buyers to showrooms. The automaker has incorporated a plethora of upgrades such as boosting the power generation by 51 horsepower — nearly 20 percent more than the present generation. The 2018 GS is designed to be a nine-speed automatic transmission, which shifts the power to the wheels via typical all-wheel drive.

Keeping an insight for the upcoming years, Buick drops the idea of the Regal sedan to make way for couple of body types: The Regal Sportsback Hatchback which is designed by the auto-giant’s to replicate a coupe and look like a regal TourX wagon. Deriving its platform from the ‘Opel Insignia’, the GS would be manufactured and exported worldwide from Russelsheim, Germany, owing to the company decision to halt manufacturing the Regals in Oshanea, Canada.

Similar to the regular Regal Sports back, the GS receives GM’s all new 9 speed automatic transmission which is sure to mesmerize the auto-enthusiasts and the potential buyers, plus there is no manual transmission offered in a bid to make the car a luxurious and comfortable drive.

What differentiates the all new Regal GS is that it substitutes the 2.0 litre turbocharged four cylinder engine with a 3.6 litre V6 engine preloaded with the direct injection technology. The engine works wonders to generate the power equivalent 310 horses and an impressive torque of 282 lb-ft. The GS is additionally enriched with the goodness of start/stop technology coupled with cylinder deactivation.

While it is interesting to note that V6 is being heavily dropped by major motor-heads in the mid-size car segment, the vice president of global Buick and GMC quoted, “We felt that GS should be backed by a different power train, and luckily we got the opportunity to implement it”. For now, the company has no plans to launch a hybrid version of the Regal GS as it was never a matter of consideration for the performance oriented Regal GS.

Loaded with the goodness of a standard all-wheel drive coupled with an amazingly active twin clutch, the GS offers a smoother ride by making use of the second generation- regular damping control and an interactive drive control features in order to tailor and adjust the car’s dynamics by selecting the standard seating or putting forward a response with the GS and sports modes.

Focusing our attention towards the car’s front, we realize that it beautifully continues the trademark legacy of the Buick- the front waterfall grille. What distinguishes the all new Regal GS is the extra-ordinary rear and front fascias, a rear spoiler which seems special, side-skirts and Hill-LED headlights and taillights which imparts a sturdy sporty look to the hatchback.

Furthermore, there are brenebo brakes which are standard in nature, an exhaust which is sports customized, ideal 19-inch wheels, a stylish steering wheel coupled with flat bottom, and not to forget the metal pedals. The car’s interiors are richly loaded with the dynamic heated and cooled massaging performance seats. The interiors are loaded with the goodness of standard 8-inch touchscreen to boost up the infotainment; the screen is compatible with apple’s CarPlay and android’s Auto-compatibility.

To keep the car safe and sound, on and off the road, it is enriched with the goodness of “Driver’s confidence 2” package which incorporates a reflexive front pedestrian braking and lane-parking keep assist, a forward collision alarm, and an impressive cruise control loaded with the goodness of forward automatic braking.

The new Regal GS is sure to be the upcoming sweet spot of the auto-market and is all geared up to take the world by storm. A much more refined and luxury studded upgrade to its predecessors, the Regal GS works wonders to offer its buyers a complete value for their money with some indispensible features such as the all-wheel drive. The company has backed the car up with high expectations as it anticipates the car to account for 10% of its regal sales in America alone. The car would show up in Canada but there is no confirmation about the GS’s launch in Mexico yet.

CARS 3 – THE RETURN OF THE ANIME CAR SERIES