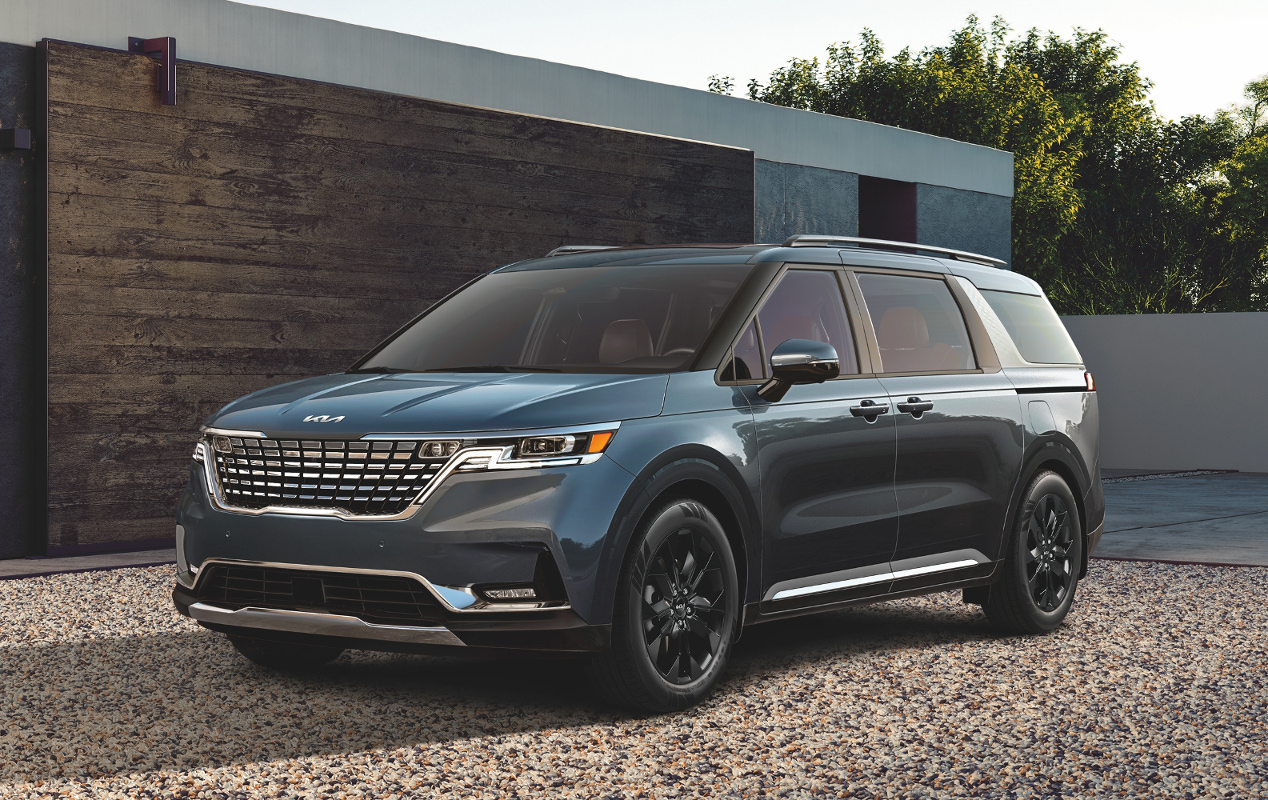 What you’d expect for a van on the Carnival is just that: it’s a van good for taking the kids out to summer camp. The van impresses family heads, and it’s stylish enough to disguise itself as an SUV. Thanks to the manufacturer’s choice in design, prospective van drivers just might swap their SUVs or crossovers for Kia’s latest kid-friendly vehicle instead.

Thanks to the SUV-ish design, the Kia Carnival‘s deviation from the traditional boxy van look is competing with the likes of Chrysler’s Pacifica. Kia recently upgraded its logo and placed it squarely above the texture grille on the Carnival. Shiny C trims highlight both the grille and the new logo. This alone may qualify the Kia Carnival to be the best van of the year.

On the inside, the Kia Carnival is full of infotainment screens for children to watch the latest releases for cartoons. Although it doesn’t have the same comforts (i.e. extra pillows in the Pacifica) to make it to the luxury levels of other vans, it sports a classy look using brown leather upholstery for the seats. There are kid-friendly glossy plastic trims that should be able to withstand shoulder blows from 5 year olds.

It’s not only the kids who get to enjoy the infotainment system. The Kia Carnival is capable of simultaneous Bluetooth connections for two devices. Voice recognition capability is on for quick map searches, courtesy of Google Voice or Apple CarPlay tech.

The 2022 Kia Carnival overdid the comfort side of a supposedly kid-friendly van. There is less storage space due to the VIP lounge seats on the second row, but it does have automatic heating and cooling for disagreeable weather.

They’re just too massive to simply move around and another adult may have to step in to rearrange the ottoman. Despite the weight, the seats are fully automatic. The second row also slides forward for parents who want their youngsters within reach.

The Kia Carnival has fully reclining seats in the SX Prestige version, and also has an additional leg rest. The sunroof opens up to provide extra ventilation when cleaning out spills or food mess.

The Kia Carnival really let go of cargo space so adults can have seats furthest back. In comparison to the Toyota Sienna, it has less compartments and shelves. The Kia Carnival can accommodate up to 7 passengers, and 8 if pushing for more.

Getting in and out of the van is easy thanks to power sliding doors. It has a keyless entry function that would be useful for anyone carrying younger children.

The Carnival accelerates from rest to 60 mph in just 7 seconds and this is possible because of the 3.5L V6 engine. The V6 supplies a steady 290 horsepower at 6400 rpm, while giving the Carnival enough torque force of 262 lb-ft to help it start and stop. It’s a little behind the Honda Odyssey but it outperforms both the Toyota Sienna and the Chrysler Pacifica.

The V6 engine is coupled with an 8-speed automatic transmission.

As good as that sounds, the Kia Carnival only has a FWD configuration, unlike the Sienna and Chrysler’s Pacifica. It’s still fuel efficient but is severely behind Sienna’s 35 mpg, being able to extend fuel efficiency to only 22 mpg. Kia Carnival’s fuel efficiency improved over Sedona’s disappointing 17 mpg for city roads.

The Kia Carnival is equipped with Continental CrossContact RX. The wheels have a load index of 101. The wheels aren’t the best for speeding, but they’re ideal for touring. The section width spans 121.7 inches. It’s good for either dry or wet climates, and should grip asphalt for a long time.

Kia Carnival has several built-in features to make it truly child-friendly. A standard built-in forward collision warning system and pedestrian detection will be useful when driving through heavily populated areas like schools. In response to near-collisions, there’s an automatic forward emergency braking. It’s hard to predict children’s behavior, and since they’re especially small, the Kia Carnival has a blind-spot warning with active collision avoidance, in addition to the rear cross-traffic warning.

It’s a safety feature in a way but the Carnival’s auto dimming rearview mirror helps lessen the chances of accidents by reducing glare. It would be nice if an auto dimming function applied to the rear windows to save children from the prying eyes of the public, or from strangers, to be specific.

Sometimes, parents can get too preoccupied with their schedules and they might leave children in the back. A rear occupant alerts the driver of any movement, monitoring continuously 24 hours even after the vehicle is locked. The Carnival actively lets parents know by flashing its lights and a subsequent horn honk, even going as far as sending a text message once Android or iOS is synced to the van’s interface.