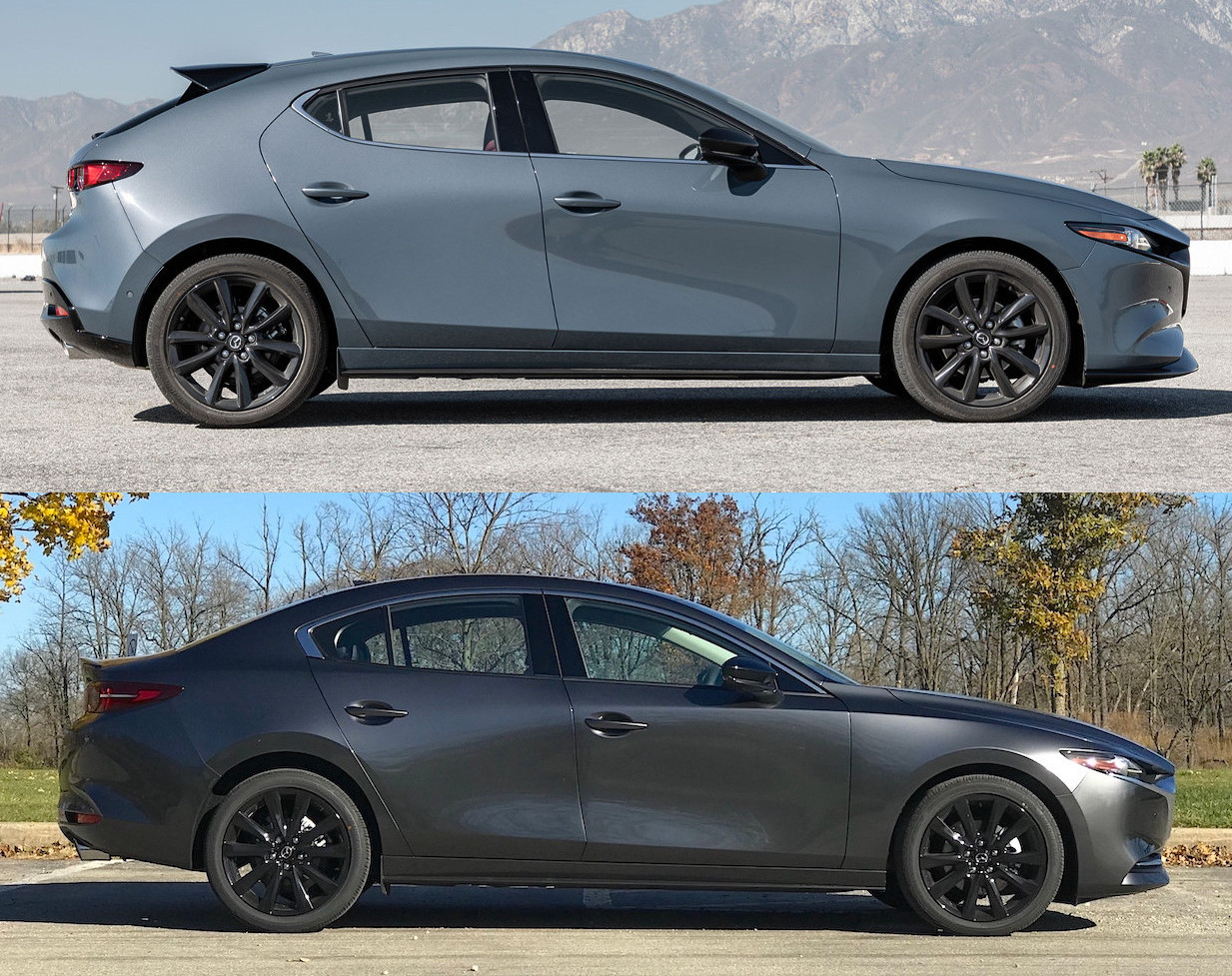 Hailed for making lightweight and fuel efficient cars, Mazda makes another unique package to deliver to its customers. The company attempts to bring a more serious, and premium feel to its lineups.

Mazda 3 makes it way to the turbo-powered  premium car competition along with Mercedes-Benz A-class, Audi A3 and BMW 2-series. This “small” car packs a powerful 2.5 liter turbocharged four-cylinder paired to a six-speed automatic transmission, bringing the whole unit from 0 to 60 in just 5.9 seconds. The engine outputs 227 hp and 310 lb-ft of torque force but drops to a difference of 20hp depending on octane choice. The Skyactiv-G engine increases fuel efficiency by allowing less consumption of gas to be used while maximizing engine output. The AWD models have fuel economy ratings of 23 mpg for city and 31-32 mpg for highway.

The exterior has a mesh design front grille with LED headlamps. Tires are mounted on 16-inch Aluminum alloy wheel frames. The rear end is fitted with dual exhaust tail pipes to further reduce back pressure and improving horsepower. The side mirrors, although not as intuitive as the wipers, lowers risk for breakage when parking in tight spots, given the inclination for small-car owners to park in ever-smaller parks.

Both the sedan and hatchback variants have AWD (manual transmission says goodbye to both). This could be a boon to stick-shift enthusiasts since the flexibility offered by manually handling the gearbox is needed when maneuvering tight curves in imaginary high-speed police car chases – just kidding, nobody really does that in the real-world, but it’d be so cool seeing a Mazda 3 be employed by your local five-o. The handling feels responsive due to the electric power-assisted steering and let’s you switch directions with ease.

You don’t have to get the car to the redline for it to be noticed. The engine has a nice rev sound and sounds deep when you’re comfortably settled inside partly because it employs the speaker trick other car brands use.

Depending on the variant, the curb weight average around 3379 lbs for sedan variant to 3383 for hatchback variant. To preserve grip while countering the additional weight, manufacturers increased spring rate by 15 percent. This will allow the wheels to have contact with the ground at all times and not have the frame dragging sparks across concrete. There is a side to this though –  road testers observed an understeer but this could be attributed to the momentum carried forward by the powerful engine.

All of the variants have a 12.7 gallons fuel tank capacity which should be enough although it is on the lower-end. To help improve fuel economy, a spoiler is included above the rear glass but this is only present in the hatchback versions as the tail end of the sedans already lessen lift-induced drag.

The interior of the Mazda 3 has some few things going on. The center console serves as a divider between the two front seats and  acts like an armrest of some kind. This could be a pro for long drives and hopefully not a contributing factor to more drowsy drivers as this looks really comfortable to lean on. There is enough leg room for the driver side and everything is within hand’s reach. The steering wheel is heated and the leather-wrapped shift knob feels nice to the touch. The seating and trims are also covered in exquisite synthetic black leather. The leatherette option is for the top premium packages while the standard comes with cloth seating. For more cabin space, the rear seats can be folded down to accommodate 47.1 cubic feet more.

A 7-inch HUD is docked in front of the windshield so drivers don’t have to look away from the road. The Mazda 3 also comes with a 12-speaker BOSE sound system which sounds excellent in the limited cabin space. Although the HUD helps with front-facing visibility, the hatchback variant has C-pillars that becomes a dangerous blind spot from the driver’s seat. This is compensated for with its solid safety features – the Mazda 3 was awarded the 2020 IIHS Top Safety Pick, in addition to having the highest score for ease in child seat installation. The website also indicates all unites have automated emergency brakes for loss-of-control situations, blind-spot monitoring (we see you C-pillars), and cruise control.

It’s one of the best compact cars out in the market and we already know why. With a heavy emphasis on fuel economy and safety, this should be a good pick for anyone considering this as it’s currently priced below $35,000. Not bad for a small car.

Tall Story for a Ford Transit 350