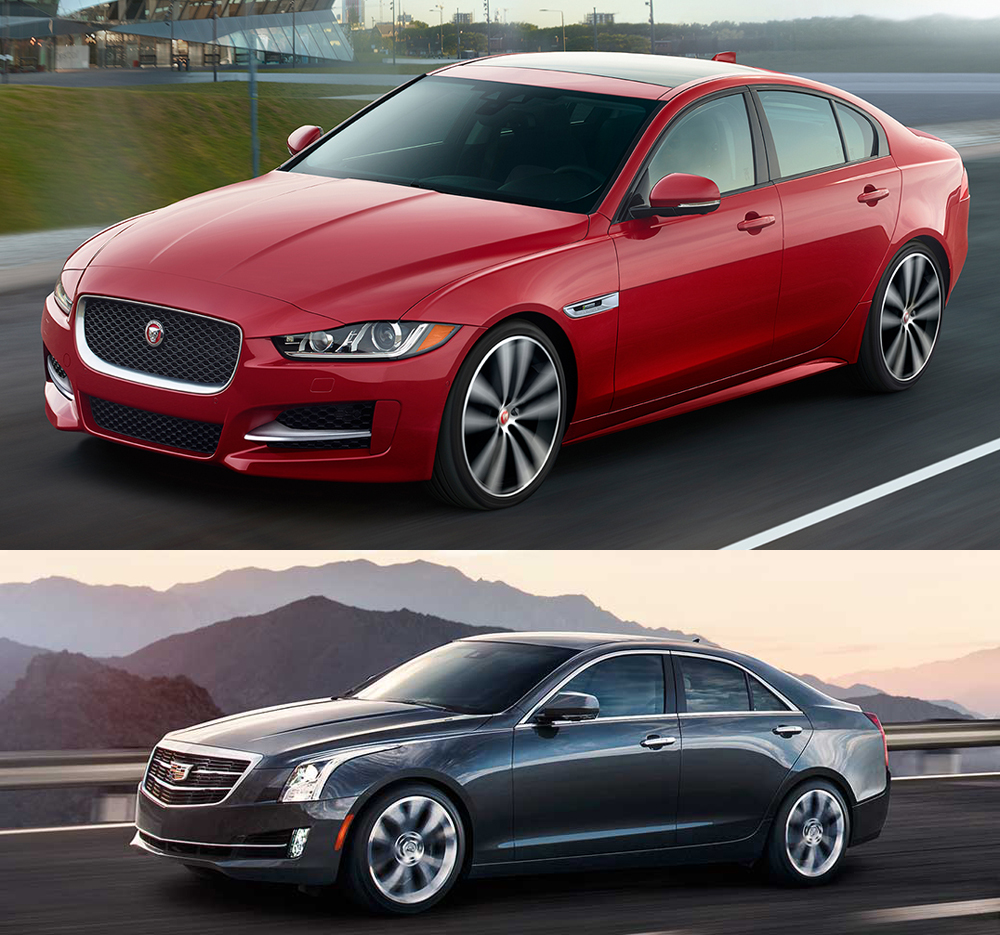 The luxury sedan market is as competitive as any segment in the industry and leading the pack are the BMW 3 series, Lexus IS, Infiniti Q50, Jaguar XE, and Cadillac ATS. The last two sedans are particularly interesting to pit against each other, because the Americans and British are mighty proud of their motoring legacy. This article takes a closer look at both models.

Jaguar hopes that its latest XE would give it a stronger foothold in the US market where it has been struggling to find its niche for the past few years. With the 2016 Jaguar XE, the British brand may have an attractively priced entry-level model. It is beautifully designed with a very competitive feature set.

Another engine option for the XE is the 2 liter, turbodiesel four-cylinder power train. This is for the XE 20d model. Outputs are in the 240 horsepower range, making the XE sprint to 60 miles per hour in around seven seconds.

The interior of the Jaguar XE appears to be inspired by the clean and minimalist functions found in Audi and MB cabins. There are lots of leather and suede covering the seats and key touch points. The center stack features an eight-inch touchscreen for navigation and entertainment, and a set of conventional buttons for climate control.

The Cadillac ATS is also a very good entry level luxury sport sedan that can give the Jaguar XE and other European rivals a run for their money. The 2016 model is being praised for its excellent handling and topnotch interior design although the backseat and trunk could have used more space.

There are three engine options for the Cadillac ATS, with all three engines having the standard rear-wheel drive and eight speed automatic transmission that replaced the old six-speed.

There’s also a turbocharged, 2 liter four-cylinder engine with outputs of 272 horsepower and 295 pound feet of torque found in the 2.0T models. The 3.6 models meanwhile have a 3.6 liter V6 engine that produces 333 horsepower and 285 pound feet of torque, with EPA estimated fuel economy of 20 mpg for city driving and 30 mpg for highway driving. All wheel drive is optional for this engine.

There are four trim levels offered for the 2016 Cadillac ATS—base, luxury, performance, and premium. The base trim has standard features such as heated mirrors, 17-inch alloy wheels, keyless ignition and entry, automatic headlights, cruise control, and dual-zone automatic climate control. There is a 5.7 inch driver information system that is easy to use and six-way power front seats for both the driver and front passenger.

The Jaguar XE may beat the Cadillac ATS in terms of road performance but it appears that the latter has the upper hand in the cabin features. It would be interesting which model performs well in the market this year.