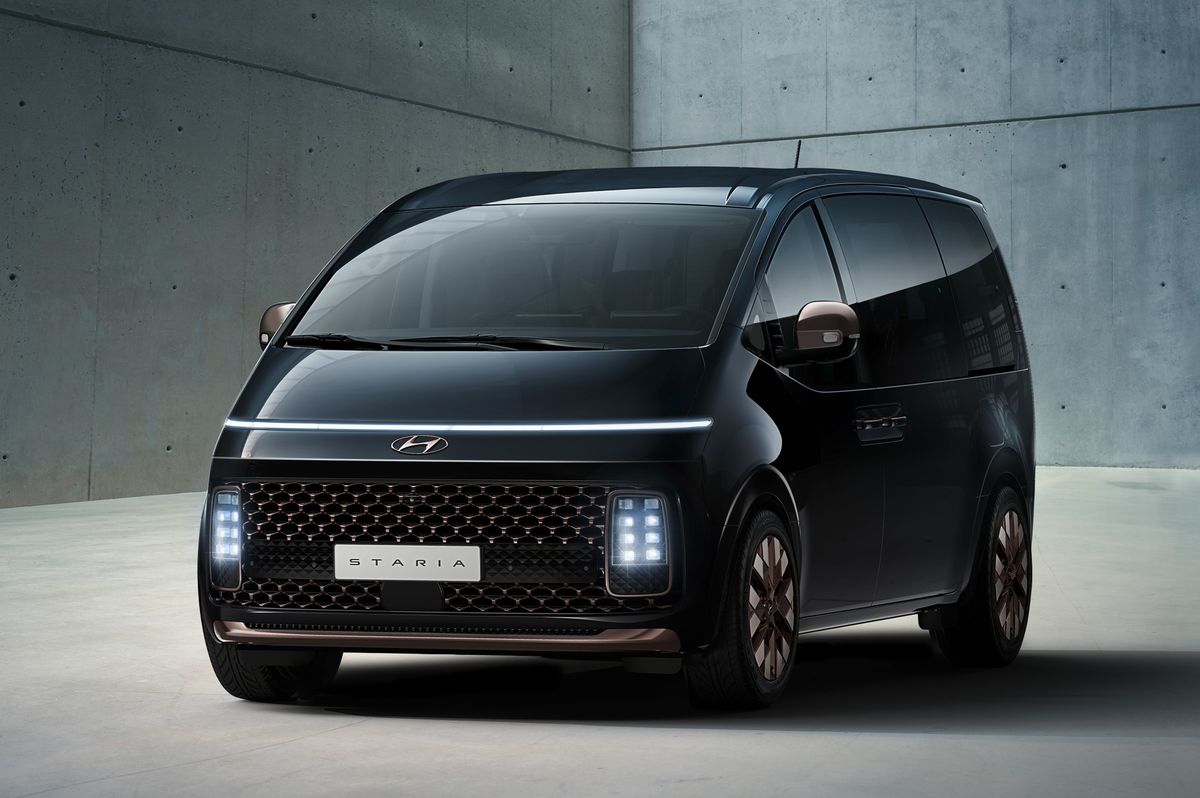 Hyundai is set to release Starex’ successor, Staria, this 2021. The company has been known to produce cars under the budget segment, with its cars competing with lower average prices than other car brands like Honda. Hyundai sells cars for lower than $20,000 and this lineup consists of Accent, Elantra, and Venue, among others.

Hyundai is no beginner when it comes to producing vans and light commercial vehicles – the company is actually going on sale for its 2020 Grand Starex in May to make way for the Staria.

The Hyundai Staria measures a total length of 206.9 inches and a 78.5 inches width on both the Diesel and LPG variants.

The Hyundai Staria features the same seat configuration as the Starex, with variations offering capacities of up to 11 people. The Staria features a modern interior look, with leather seating. The interior mixes classic and modern with the color choice of space gray and mahogany brown. The premium variant of the Hyundai Staria has ambient lighting for more visibility, in addition to the skylight window that provides ample natural lighting in daytime conditions.

The cabin is equipped with an automated air conditioning system that also detects indoor pollution, adjusting to cleaning mode when detecting high numbers of air particles.

The Staria’s exterior features a daytime running light for accents. The general shape of the Hyundai looks like a truncated front section of a bullet train, and whether or not this affects aerodynamics is less relevant because of its premium-looks.

Passengers can get in the Staria with its 5 door setup. Like most standard vans, the side doors slide for ease of entry.

The interior of the Staria is more comfortable than Carnival thanks to an additional 9.8” of vertical clearance. The spacious interior can accommodate additional cargo, and depending on the seat configuration, up to 176 cubic feet in total.

In comparison to the Kia Carnival, it’s about 31.5 cubic feet more spacious. Of course, nobody wants a spacious cabin with the silence levels equivalent to the vacuum of space, so Hyundai put Bose speakers in for good measure.

Hyundai Staria’s engine can output 3800 RPM from the Diesel engine variant, while the LPG variant outputs a faster 6000 RPM.

Drivers will have a more stable driving experience with rear multi-link suspensions. This is important since most of the load will be carried on the rear-end of the car. The stability will be more evident in variants with automatic transmission than the 6-speed manual transmission.

The Hyundai Staria has several features that help ensure passenger safety. There’s rear side detection for cars approaching too closely – the Staria locks the sliding doors and also alerts the driver if the front seat door is open.

For drivers who have trouble parking, there’s a smart assistant to help get into tricky spots, coupled with a monitor that displays surrounding environments. The Hyundai Staria has a speed limiter and can also recognize traffic sign information.

The Staria both have front and rear cameras for additional visibility and security which can record high-definition video clips.

All other passengers can expect a level of safety from injuries as the Staria deploys 7 airbags upon collision. The driver also has knee airbags to prevent leg injury.

The Hyundai Staria will not be available in the US upon its release for the second half of this year. The van will be available in yellow and brown, and six other colors, with specs ideal for camping vans and ambulances, although Hyundai has not given out information on when these variants will be released.

The Hydrogen Fuel-Cell for the Cars of the Future