The Porsche 911 is the flagship model of German automaker Porsche AG. Introduced in the market in 1963, many car lovers consider it the premier sports car in the world. Since its introduction more than 50 years ago, more than 800,000 units have been sold making it one of the most commercially-successful sports cars in the planet.

The car is revered for being sporty yet practical for everyday use. Ferry Porsche, the son of Porsche founder Ferdinand, uttered the words that best describe the qualities that make the Porsche 911. According to him, “the 911 is the only car that can be driven on a safari, at the French city Le Mans where the popular 24 Hours of Le Mans sports car race happens, and through the traffic of New York City.” 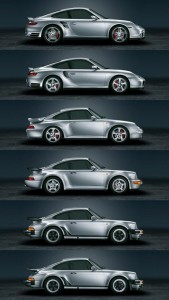 The Porsche 911 was the successor to the Porsche 356, which was the very first automobile manufactured by this German car company. Its prototype was first shown to the public during the Frankfurt IAA Motor Show, and was first known as the 901. It was only a year after that the company renamed it as 911, in time for its market launch.  The car’s engine was enough to deliver 130 horsepower, enabling the vehicle to zoom to as fast as 131 miles per hour.

In 1967, Porsche became the very first German automaker to comply with the very strict emission control regulations of the United States with the introduction of its Porsche 911T and later on, the E and S variants of its vehicle model.

In succeeding years, the company was able to improve the engine displacement of its models from 2.2 liters in 1969 and 2.4 liters in 1971.

A decade since the launch of its flagship car model, Porsche decided it was high time to give the 911 its first makeover. The Porsche 911 G Model started to come out in 1973 and stopped until 1989. It had the longest lifespan among the 911 generations. Cars produced during this generation were known for having conspicuous bellow bumpers. At that time, people thought it was a fashion statement by the German maker.

However, the design was more than aesthetics. It was designed to comply with crash test standards of the United States.  Driver and passenger protection was further enhanced by the introduction of three-point safety belts and integrated headrests.

In 1974, Porsche unveiled the 911 Turbo that featured a three-liter, 260 horsepower engine. It soon became a hit in the auto manufacturing industry, further adding to the charm of the Porsche brand.

In 1988, the 911 platform was seen to be slowing down in popularity and prestige. However, the company gave it more improvements like the 911 Carrera 4 or Carrera 964  that came with a 3.6-liter engine capable of delivering 250 horsepower. Aside from the powerful engine, this model was a hit because of its enhanced comfort with features such as power steering, airbags and anti-lock breaking system. Today, the Carrera 964 has become a valuable commodity among car collectors.

The Porsche 911 with the internal design value 993 is also one of the most valuable models of this flagship range. It was known for being dependable, reliable and agile, being the first 911 model that had an aluminum chassis. In 1995, the 993 Turbo version became the first to have a dual-turbo engine and aluminum wheels.

The Porsche 911 with internal design number 996 was rolled off in 1997 until 2005. It also represented a breakthrough in the history of the car range, retaining the traits of its classic models but built around a completely new engine. The water-cooled boxer engine achieves 300 horsepower thanks to its four-valve cylinder heads, setting innovations in terms of emissions, fuel economy and noise.

Purists, however, were in love with the exterior design of the 996. Many car enthusiasts were drawn to its headlights with integrated turn signals. Surprisingly, this feature was controversial at first but was later imitated by other automakers.

In 2004, or 41 years since it introduced the Porsche 911 to the market, the company unveiled the new generations of the 911 Carrera and 911 Carrera S. Internally, the company called the latter the Porsche 997.  The first model was a high-performance car boosted by a 3.6-liter boxer engine capable of delivering 325 horsepower, while the Carrera S came with a 3.8-liter engine with 355 horsepower.  Two years later, Porsche came up with the 911 Turbo. The Porsche 997, meanwhile, was improved with direct fuel injection and dual clutch transmission.

The latest model of the Porsche, the 991, is the newest member of the 911 generation. Its features include large tires, long wheelbase and ergonomically designed interiors that give the driver and passengers a more comfortable driving experience. The 911 generation is highly regarded for its low fuel consumption and high performance.

All About the Next Generation Acura NSX

History of the Chevrolet Corvette