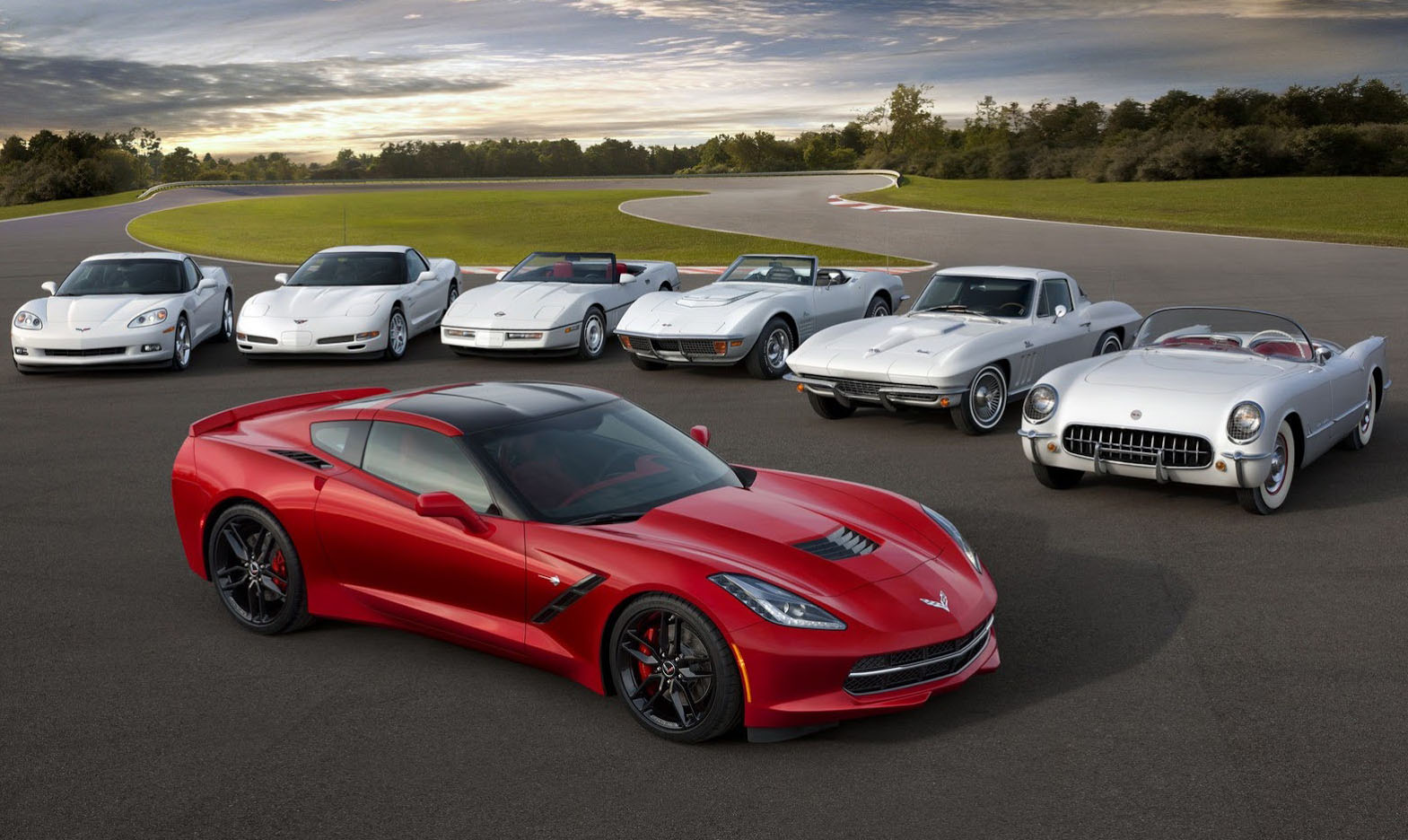 The Chevrolet Corvette is perhaps the most perfect example of American automotive history, and some say it’s actually a symbol for America itself. It’s unapologetically brash in looks, and its performance is more about brute force than the subtle knife-edge precision of its European counterparts. Since it was first released, it has captured the interest of the American public, and today the newest Corvettes can still accelerate the pulses of young drivers with its looks and performance.

The first Corvette made its appearance at the 1953 New York Auto Show, and it quickly left a deep impression upon everyone who sold it. The performance, at first, wasn’t much to brag about. It offered only 150 horses and the transmission was just a two-speed Powerglide automatic. Form a dead stop, it took a relaxed 11 seconds to reach 60 mph. That caused some problems in sales until 1955, when the Corvette finally got the V8 engine its looks deserved. With that change, it could reach 60 mph in just 5.7 seconds.

By 1962, Chevrolet arrived with one of its most iconic versions. Its performance was also much more impressive with the 360 horsepower engine.

The C2 generation was the first to take on the Sting Ray name, and it was quite apt. Bill Mitchell wanted to create a look that was patently startling, and that change resulted in the Sting Ray moniker.

The first C2 in 1963 is considered to be among the most beautiful. Not only was it the first coupe in Corvette history, but it also featured a unique split-window design. It rode and handled much better than before, and for the first time it even had air-conditioning. The last C2 in 1967 is also among the most collectible today, as it offered the L88 option. It could reach up to 500 horsepower, and only 20 L88s were made.

While Chevrolet continued to build a few more L88s (about 80 in all), it wasn’t all good news for this generation. It’s true that the first models were formidable and that Chevrolet would produce 540,000 units throughout this generation. But 1971 was the year that Chevrolet had to comply with new emission regulations. The 1971 model had the engine offering only a more modest 365 horsepower, and through the years of this generation this would just decrease. The 1973 version offered only a disappointing 190hp.

This generation started out shakily, since it actually was launched in 1984. Production problems meant that there was no 1983 version. It featured a complete makeover, however, and it sold well due to its solid performance.

The 1990 version was a huge breakthrough, with passenger airbags and antilock brakes. But the release of the 375-horsepower ZR-1 created quite a buzz, although the exorbitant $58,000 price tag was a downer. The ZR-1 was offered through 1995, and it was able to reach 60 mph in just 4.9 seconds and complete a quarter-mile in 13.4 seconds.

With the rapid changes in technology, Chevrolet completely overhauled the Corvette design for the C5 generation. The goal was now to covert from something brash and loud to a car that’s comfortable while still fast.

This generation was quite successful. The 1998 coupe and convertible won quite a few awards including Motor Trend’s Car of the Year. The 2002 Z06 also needed just 3.9 seconds to go from 0 to 60 mph. Along with 405 horses, the Z06 featured especially sticky Goodyear tires, a stiffer suspension, and a body that was rigid and lightweight. The 2004 model commemorated the success of the C5 generation in public roads and in races such as Le Mans that a special edition was made with a carbon fiber body.

Even though the base price has gone down, the C6 generation came with a leaner look with an impressive 400 horsepower under the hood. The 2008 model offered 436 horsepower.

In 2009, the ZR1 was revived, and it did 0 to 60 mph in just 3.5 seconds and the quarter mile in 11.5 seconds. That was to be expected, since it came with an amazing 638 horsepower through a forced-induction engine. The designers also cut a considerable 250 pounds off the weight by using a new carbon-fiber roof.

This is the most impressive generation in terms of performance. Even the base model is astonishingly quick. It reaches 60 mph in just 3.8 seconds, and the quarter mile can be completed in just 12 seconds flat. The engine is rated at 455 horsepower, which is the most powerful base engine ever put on a Corvette. It also featured direct fuel injection, active fuel management, and continuously variable valve timing.

So while the Corvette has had an illustrious history, the new generation shows that the future of this car promises a lot more fun and excitement.

The History of Porsche 911

History of the Chevrolet Camaro