Can the new Polestar 2 compete with the Tesla brand in the electric car niche?

Right now, Tesla is king of the heap when it comes to electric cars. But a new challenger has arrived, and it’s certainly a welcome addition to the electric car sector of the automotive industry. There’s really no such thing as too many choices when it comes to cars that don’t guzzle gas.

But now we have the Polestar 2. Polestar isn’t exactly a household name, but it’s part of Geely Auto Holdings. This Sino-Scandinavian group is the mother company of Volvo, so it’s not as if it’s an upstart. Polestar used to be the high-performance division of Volvo (kinda like AMG), before it switched to making electric cars.

Polestar revealed the Polestar 2 in early 2019, and it’s taken this long to be available. It’s only available in limited numbers, and you can order one of these babies online. The dealers (named “Polestar Spaces”) in some major cities in the US will deal with the delivery and service.

Right now, you’re only option is to go with the pimped-up version of the car with the huge price tag. This includes the optional Performance package. For $5,000 you can get Öhlins adjustable dual flow valve dampers, gold Brembo 4-piston front brake calipers and cross-drilled rotors, and sticky 245/40R20 Continental SportContact 6 summer tires on staggered 20-inch forged aluminum rims. The front tires are 8 inches, while the rear tires are 9 inches wide.

A more basic version of the Polestar 2 should be available shortly.

This comes with a motor on the front axle, and another motor on the rear axle. These 2 motors give you 408 horsepower and 487 pound-feet of torque, which should rival anything you can get from a more conventional sports car.

There’s still no official word from the EPA on the range. Polestar estimates a range of somewhere near 250 to 275miles, but actual tests indicate that this is an overly optimistic hope. Actual tests showed results of just 190 to 205 miles. While that matches up nicely with the electric car ranges from Chevrolet and Audi, it doesn’t quite reach the 234-mile range you get from Tesla Model 3 Long Range in actual tests.

The main issue here is that Polestar 2 has regular steel instead of aluminum. While steel is certainly more affordable, it’s heavier too. This car weighs 4,720 pounds. Compared to the heaviest Model 3 Dual Motor Performance, the Polestar 2 is heavier by 634 pounds. It’s even 300 pounds heavier than the Model Y.

At least the Polestar 2 is faster than the Tesla Long Range by 0.7 seconds, as it takes 4.1 seconds to go from 0 to 60 mph. That’s still a full second slower than the Tesla Performance car, though. You only need 12.6 seconds at 110.9 mph to gobble up a quarter of a mile.

Basically, it’s fast. You won’t have any trouble merging into freeway traffic, and it can pass slowpokes in an instant. The pedal feel is unusual, while you can drive with just one pedal with the adjustable regenerative braking.

This looks unassuming, which may put you off unless you’re a big fan of Scandinavian minimalism. Its size seems conflicted, too. You can call it a fastback sedan except it’s a bit taller, or a 4-door SUV that sits lower to the ground. It’s basically the same size as a Ford Escape except its height is lower by 8 inches.

It does offer comfy accommodations inside. You can fit in 4 adults inside, even if they’re all 6-footers.

It’s even entirely vegan, if that matters to you. Most of the cabin is covered with what Polestar calls “WeaveTech”, which uses recyclable materials to create a good-looking basketweave cloth that covers even part of the instrument panel. 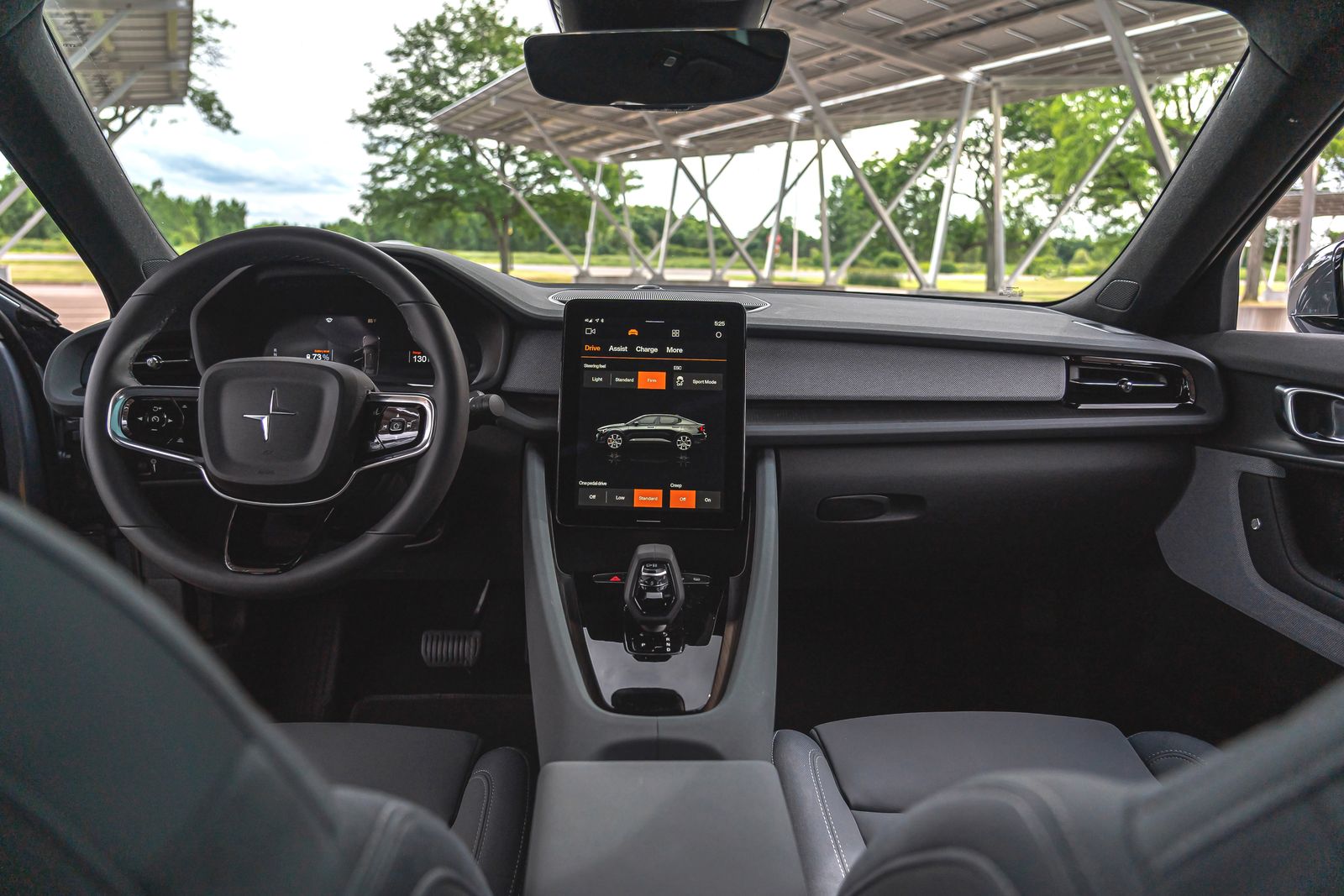 If it doesn’t matter to you if it’s vegan or not, there’s an option for leather seats. The whole interior looks neat with most of the functions going through the 11.2-inch touchscreen. A 12.3-inch instrument-cluster screen gives you the driver information you need.

Polestar also worked with Google for the infotainment system, so now you have the first-ever Android Automotive OS. You can then access the Google Assistant and Google Maps, or even the Google Play Store. The system here is compatible with both Android phones and iPhones.  The natural-voice works great.

Despite the rather unassuming looks, this Polestar 2 may be a viable alternative to Tesla. It’s fast and sporty enough, with a clean interior design and an easy-to-use infotainment system. It offers a very relaxed ride in all the ways that matter. The looks may not be eye-catching, but you’ll certainly appreciate its subtle flair.

The Sheer Lunacy of the BMW M8 Competition