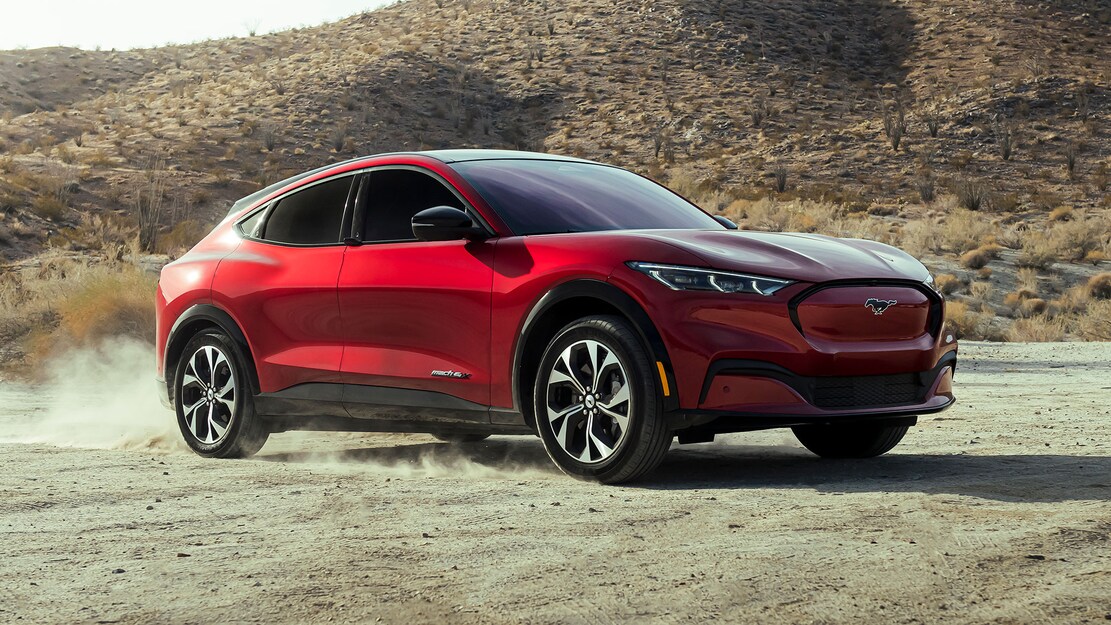 Winner of the 2021 North American SUV of the Year Award, the Mach-E is an EV offered by the American automobile company promising a cleaner performance and a cleaner environment. The Mach-E’s name is a play on the first Mach made by Ford in 1964, and has come a long way in terms of automobile tech and features.

Sleeping under the hood is an electric motor that has a 346 hp output. The electric motor is able to bring the Ford Mustang Mach-E eAWD from 0 to over 60 mph in just 4.8 seconds. In the eAWD variant, the torque available is just over 428 ft-lbs, while the RWD variant gives a little under 317 ft-lbs – both of which are still powerful. The electric motor connects to the front and rear axles, making it a true electric AWD.

Charging the 88.0-kWh battery doesn’t take too long, and there’s fast charging available on the Mach-E Premium build. All the models actually have fast charging capability and a standard Ford mobile charger is included in the purchase. Ford recommends charging the batteries overnight, and DC fast charger can add 52 miles of range in only 10 minutes.

As for its performance on the road, variants of the Mach-E perform close, or even rival that of Tesla’s Y Performance. The motors output for the Mach-E Select is a comfortable 346 HP ideal for city drives, and the GT a more robust 480hp, albeit only available in eAWD, in contrast to the former having it available on both RWD and eAWD. Despite having such a powerful motors, the Mach-E gives a smooth ride.

The windshields are laminated to prevent scratches, and the wipers also serve to defrost it during unforgiving snow storms. On top of the Mach-E is a panoramic fixed-glass roof with infrared protection, although this is only standard in the California Route 1, Premium, and GT models.

The rearview mirror also auto dims to prevent glare from LED lamps coming off of cars located behind.

For headlamps, the Mach-E has an auto high beam, signature lighting, and led projector. The Mach-E has an adaptive lighting system to complete the theme for an all-electric vehicle. On the rear end are taillamps with LED signature lights and sequential turn signals. Helping with visibility are side view mirrors with heating and pony projection lamps. The Premium, California Route and GT models have additional black painted caps.

A huge touchscreen is the vertically mounted center of the digital console.  The center console has a flip up armrest, and the storage space is enough to put coins and pretty much any other item that fits. In terms of storage, the front trunk is made with plastic and can simply be washed clean with water or a wet cloth.

Reconfiguring the rear car seats provide 60 cubic ft of storage, and half as less when passengers are present.

Some driver comforts include a heated driving wheel, and lumbar support for the driver seat. An optional memory-driver’s seat with heating is standard in the other models. Both the Select and California Route models have ActiveX upholstery in black onyx. Each of the front and rear seats have two beverage holders for morning coffee or the afternoon tea.

While other cars are still using keys, the Ford Mach-E has a push-button for additional security. The standard airbags deploy on collision and protect the knee, as well as front and side-mounted protection for passengers. A side curtain gives a level of privacy.

One of the best features the Mach-E has for the driver is AI-assisted infotainment profiles. There are constant OTA updates, and the system can sync with Apple CarPlay, Android Auto. Bang and Olufsen speakers provide some music for extended drives.

2021 Toyota Mirai Is An FCEV Alternative To BEV