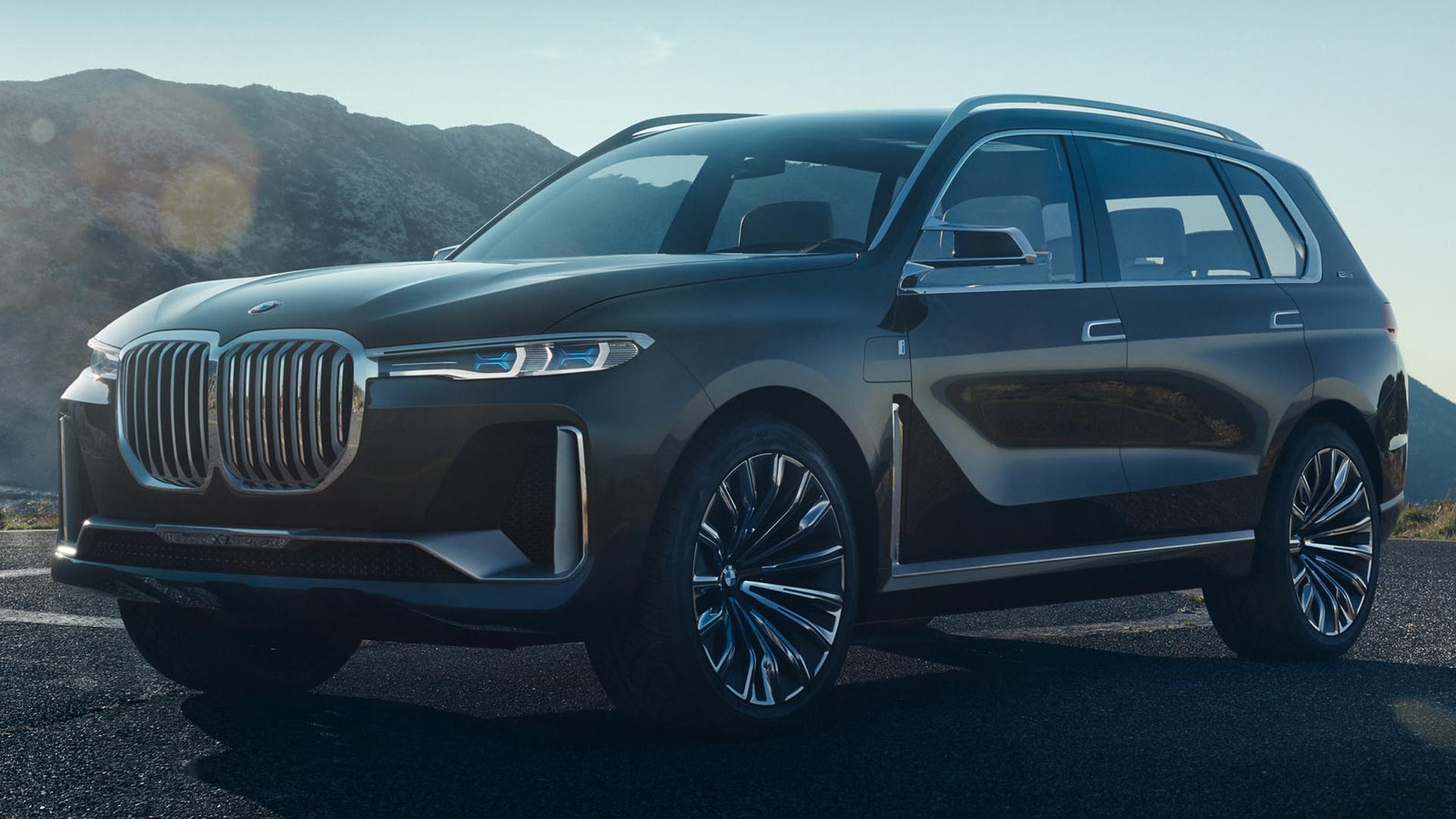 ‘The outstretched wait for BMW’s range-topping SUV is finally over. Recently, Bavarians unveiled a Concept X7 iPerformance car which is hyped as one of the largest automotive model offenses in the auto-history ’

Over the years BMW has won millions of hearts with its nail biting new models and variants, but there is one thing that its lineup has lacked this entire time: A large SUV. It has been aired for a while that the German automaker is in the middle of developing a new three-row X7, and looking to use the native Frankfurt Motor Show as the global stage to unveil a concept that demonstrates the upcoming SUV.

Wave Hello to the long-awaited BMW Concept X7 iPerformance that incorporates few of the best cues from the brand’s other SUVs. Putting in a wagon load of extra measures to accentuate this model’s size, the company has blessed the SUV with showy 23-inch wheels to give it a higher ground clearance to make sure that it “ascents prominently over the road.

To further stress upon the SUV’s height, its front and rear ends have been made extremely upright and vertical. The front features BMW’s signature dual-kidney grille which has been enhanced to the comical extremes. The sturdy grille comprises of the single, solid piece, which gives it a robust feel. Likewise, the heighted inlets at the outer edges of the lower front fascia regulate the “air-curtain” flow across the tires. These openings, like everything else on the concept, are quite up-standing and give a “hockey stick” kind of appeal to the prominent side accents.

The headlights look sleek and slim. They make use of the latest laser technology, incorporating the dual “X” lighting elements within each housing. The taillights are also slim, and showcase a matte silver bar that’s finely blended with the lamps that connects them. As admitted by BMW, the horizontal bar will be used exclusively for its top luxury models.

The SUV features giant side windows complimented by the huge panoramic sunroof loaded with the goodness of a distinctive Y-shaped supporting structure that lends an open, airy feel to the cabin.

Focusing our attention inside, we were greeted by the contrasting materials, luxurious carpeted floor, and splendid quilted leather seats. The occupants could enjoy the undisputed connectivity with screens for all six seats making the X7 an anchorage of infotainment and productivity. Utilizing the intelligent gesture controls, passengers could throw content from screen to screen or share the song with the central playlist. This fluent flow of data interscreen is richly complimented by the “interactive LED choreography” that is evident on the doors and instrument panel.

The X7 concept features an electrified powertrain. Though not specified by the auto-maker, but the concept comes loaded with the goodness of a plug-in hybrid drivetrain showcasing a gasoline engine that makes use of the BMW’s TwinPower turbocharger tech— which is much similar to the 2.0-liter turbo I-4 hybrid setup fitted in the X5 and 3 Series. Though it’s still uncertain if it will make it to production, but one can surely expect BMW’s line of twin-turbo V-8s or turbo sixes to be offered on the X7. Furthermore, one could also anticipate the general shape of this concept featured in the production version.

The X7 will ride make use of the same CLAR platform supporting the 7 Series and will be manufactured at the german giant’s U.S. plant in Spartanburg, South Carolina. We’ll have to be more patient before X7 makes its debut during the coming auto show season to view how near it gets to this polarizing concept. Nevertheless, we are quite sure to set our eyes on the X7 on sale next year as a 2019 model.

Unveiling the best cars of the 2017 Frankfurt Motor show

Audi A8: The Upcoming Flagship Sedan