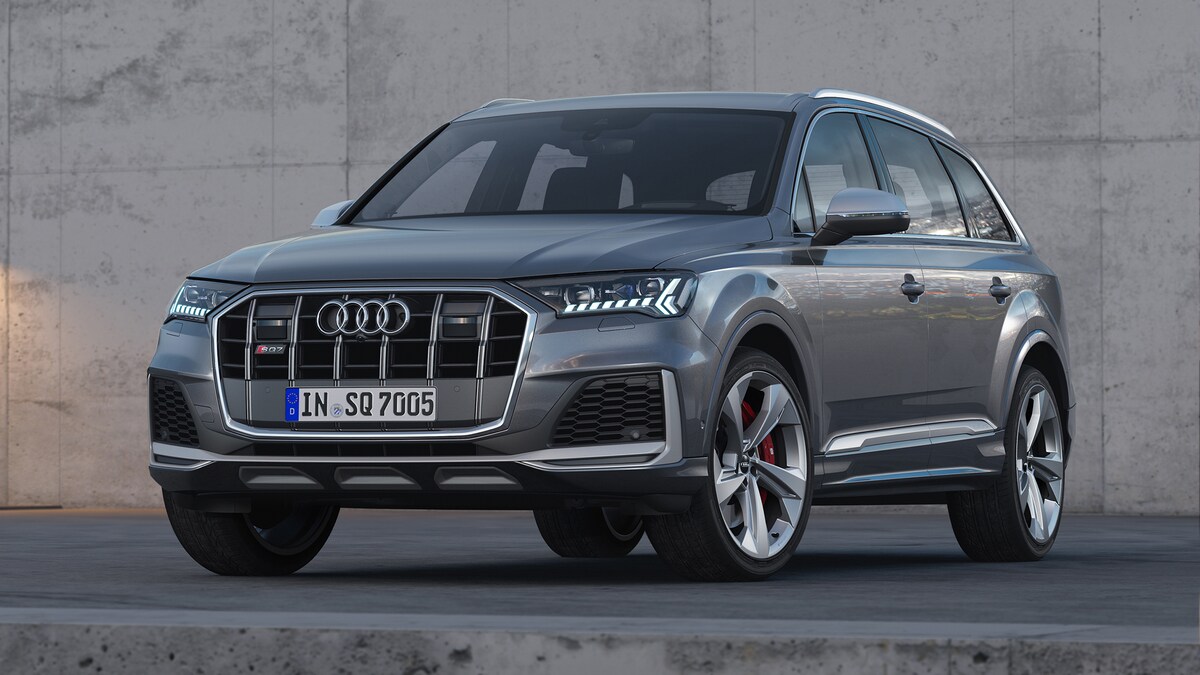 The Germany-based car manufacturer has always impressed customers with its quattro AWD systems and great-looking interiors. This year, they’re set out to release another SUV with an impressive set of wheels and a powerful engine.

The Audi SQ7 has a hood longer than most SUV’s, almost approaching wagon territory. This SUV has a curb vehicle weight of around 5300 lbs. Despite being on the lighter side, the SQ7 has a towing capacity of 7700 lbs. What supports the whole weight is an impressive 568 lb-ft of torque.

The lightweight frame on the Audi SQ7 allows for a wider cabin space. The Audi SQ7 can accommodate up to 7 passengers. There’s heating on the front seats which will be useful in the winters. All the seats are upholstered with Valcona leather. Some variations of the Audi SQ7 have leather trims on the front center console, on the door armrests, on the dashboard, door rails, and on sun blinds on the rear windows.

The SQ7 also sports amazing looking wheels. Drivers can choose from 21–inch wheels with five spoke or 10 spoke, and they’re built from high-stress alloy. The wheels look beautiful and to prevent individuals from stealing it, Audi built in anti-theft wheel bolts that would need specialized equipment to remove it from placement.

Audi SQ7 twin-turbo V8 500 hp helps it accelerate to 60 mph in just 3.5 seconds which is impressive for an SUV. The engine output helps the SQ7 reach top speeds of 151 mph (governor limited). Audi advertises the SQ7 having an 8-speed tiptronic transmission. According to EPA fuel economy for SQ7 for city is rated at 15 mpg while highway is 21 mpg and combined 17 mpg when driven accordingly.

Audi made sure drivers give the least amount of effort when driving the SQ7. Advanced features like all-wheel steering and drive modes make the most out of every driving environment whether it’s in the city or on rough country side roads. The Audi SQ7 has five driving modes.

Audi is not complete with its safety features. The crossover has a front collision detector and a “traffic jam assist.” There’s also corrective steering (the driver can’t be blamed for getting sleepy in the car, it’s too comfortable) that helps the driver stay in lane. The wheel vibrates to alert the driver if he or she is swerving unintentionally. The tactile feedback also jolts them from sleep.

The SQ7 is equipped with an HUD for front and rear parking. A 360-degree top view camera is also mounted for more visibility. To further its 360-degree capability, an exit-warning system is installed to help passengers avoid opening doors that would collide with passersby or cyclists. The windscreen wipers also move in response to detectors for light and rain. The HUD features night vision, mostly for pedestrian safety.

There’s a panoramic glass roof for more natural light during daytime conditions, and the rear and rear-side windows are tinted for privacy. The interior mirrors also dim automatically to help the driver experience fewer glares from cars coming up behind them.

The Audi SQ7 has a built in navigation system courtesy of Google Maps and hands free search via Google voice typing. Apple and Android devices can connect to Audi’s multimedia system via USB connection. Syncing via iOS and Android wouldn’t be possible without wireless connectivity so there’s also WiFi and Bluetooth capability.

The cabin functions as a good mini echo chamber (not really), so there’s a BOSE 3D sound system to play a choice of classical music or 90’s cringe alternative rock. For the other variants of the SQ7 they get the better Bang & Olufsen 3D Sound System.

Passengers at the back seat can enjoy their favorite movies with a 10” HD touchscreen display with front facing cameras for on-the-go video conferences.

So Long, Suckers! Your Guide to Buying Handheld Vacuums for Cars