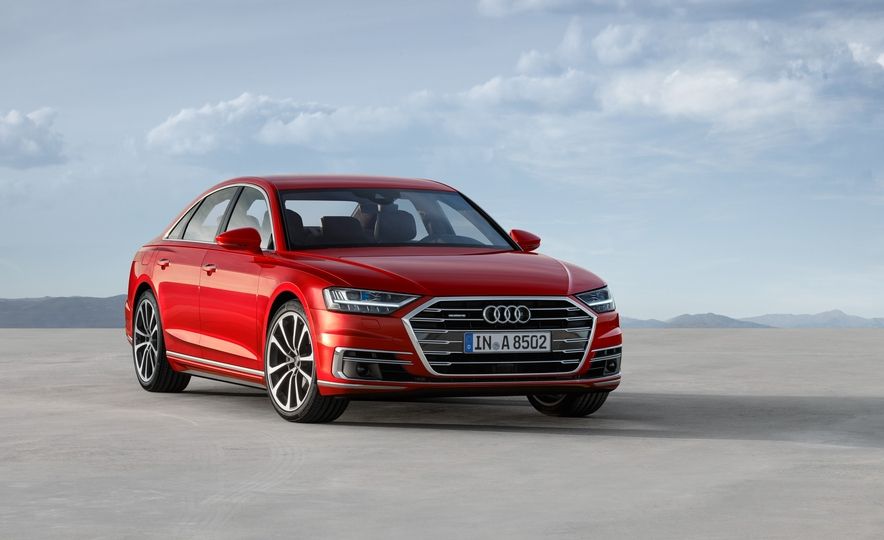 When it comes to the well established leaders in the full-size luxury sedan market, it takes miniscule of seconds to think of Mercedes-Benz S-Class , but by unravelling its flagship sedan: A8, Audi is making a plethora of efforts to close this gap. Beside the all new hybrid system, the luxury sedan receives highly automated driving technology in order to assist a smooth and comfortable drive in addition to the catchy touch screen-oriented interior.

Although, the German car giants are many a times reluctant to make major makeovers to their design languages, but the designing of the new A8 is entirely different from its predecessors. What compliments the HD Matrix styled LED headlights (backed by the laser technology) is the much wider and hexagonal-shaped grille. Deriving its origin from the Audi’s Prologue concept from 2014, the model work wonders to showcase slim taillights and a flashy lighting bar that extends across the rear end of the car.

Focusing the limelight within the cabin, the sedan showcases amazing touch points that flawlessly substitute the series of buttons incorporated within the previous model. Showered with a standard 10.1-inch touch screen which rests up front and center, and a secondary touchscreen which seats below empowers the occupants to take control of the air conditioning and various other comfort features. Loaded with the goodness of a brand new navigation system which intelligently gathers information from the most frequently traversed routes, it amazingly assists the drive to provide the driver with intelligent inputs and search suggestions.

As officially admitted by Audi, what sets their flagship sedan class apart is its optional ‘relaxation ‘seat placed at the right rear of the vehicle. This end of the seat would be equipped with the special purpose units that not only warms the passenger’s feet but also massages them to give a soothing experience to the occupant. In order to enhance the passenger’s overall experience, the motor giants have installed a comfort headrest complimented by massaging seats, and an exclusive operating unit which empowers the occupants to make private phone calls.

As mentioned earlier by Audi, it is planning to introduce its all new piloted driving technology to the A8. Enriched with the goodness of the first ever feature called “traffic jam pilot” which takes control of the car’s starting, steering, accelerating, and braking in order to facilitate drivers to take their hands off the wheel whenever they’re stuck in the middle of the slow-moving traffic on the highway. Audi confirms that the drivers could Infact enjoy the TV onboard if the local laws permits this kind of activity, added the drivers must be willing to take over the control from the temporary autopilot, once the system has reached its maximum limit. This feature makes active use of the radar and ultrasonic sensors, a front camera, and a pioneering laser scanner which work wonders to help the car drive autonomously at top speeds up to 37.3 mph. Besides the traffic jam technology, the A8 impresses to independently steer itself into the parking space and out of it. Audi plans to unleash these special autonomous features commencing in 2018.

While Audi plans to offer a plethora of engine options across the globe, incorporating a 3.0-liter TFSI V-6 backed up by the power equivalent to the 340 horses, a secondary 4.0-liter engine with TFSI V-8 and 460 hp, and a tertiary 6.0-liter engine W-12 with 585 hp. While the petrol versions are sure to allure the customers the diesel models don’t lay any further. The car would be made available in the form of a 3.0-liter TDI generating 286 hp and an additional 4.0-liter TDI engine generating the horsepower of 435 hp. The marquee 3.0-liter turbo V-6 will serve as the launch engine for the 2019 A8 in the United States.

In order to decrease the consumption, all these engines will showcase slight hybrid technology complimented by a 48-volt electrical system, which would be backed up by a 48-volt lithium-ion battery positioned in the trunk compartment, and not to forget a typical water-cooled belt alternator starter which is carefully placed up front. It is interesting to note down that the A8 could work wonders to enter the coasting mode while running at speeds between 34.2 mph and 99.4 mph, while it could continue coasting for up to 40 seconds even if the engine is turned down. Once the car is pushed back to start, the BAS automatically brings back the engine to the desired speed without any delays. Additionally, the start/stop feature has estimative starting, empowering the engine to resume as early as the vehicle in front of the car moves even if the brakes are still applied by the driver.

The driving experience is further enhanced by the fine Suspension upgrades, like the dynamic multi-tasking all-wheel steering. The engineers at Audi have worked hard to shower upon the car a fully active suspension system that enables it to raise or lower each wheel individually via electric actuators. Thanks to these characteristics, the A8 could take on the features of a comfortable cruiser as well as a sports car according to the driving circumstances.

Europe all set to embrace the 6th generation Polo