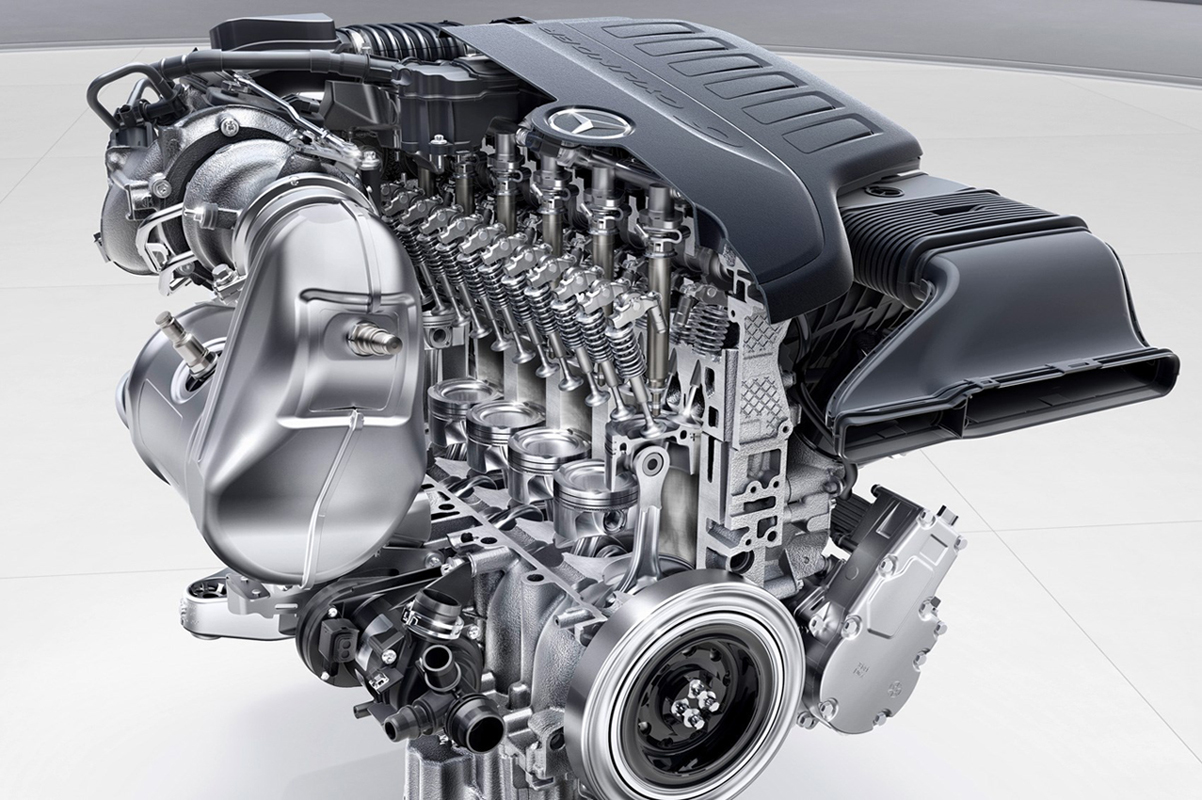 How do new engine families start out these days? Increasingly, these new engine lineups share similar specs for bore, stroke, and even cylinder-bore spacing due to China and its huge consumer market. In China, engines are taxed on a per half-liter basis, and this has resulted in making car manufacturers focus on designing their cylinders so that they don’t go over 500 cc per hole. Then the car maker just stacks the cylinders needed to meet the performance and tax target they’re aiming for.

The specs for the ideal cylinder can be reached scientifically, so it’s not surprising that various carmakers such as Mercedes-Benz, BMW, and Volvo have come up with similar designs. Here’s a closer look at the new Mercedes-Benz engines for the 500cc per cylinder lineup:

This is a rather small engine that’s supposed to power a rather large car. The secret ingredient here is the regeneration feature that doesn’t waste the energy used when the driver decelerates and brakes. Instead, somehow that energy is reused so that it can compensate for the inevitable turbo lag, which normally causes a rather noticeable delay between the time you step on the gas pedal and the time you get the turbo boost. In other words, normally it’s like pulling a load with an elastic cord, but now the new regeneration feature cuts down that delay to a barely-noticeable one-third of a second.

This advantage is due to minor hybrid design that involves the use of a 48-volt lithium-ion battery. This e-battery can also restart the engine almost immediately, so the engine can be shut down to conserve on power more frequently. The 48-volt battery also provides the power for the electric water pump. However, there’s still a separate 12-volt lead-acid battery charged by the converter, and this provides the electrical power to the other devices in the car.

Many Mercedes-Benz fans were saddened when this celebrated engine layout was abandoned way back in 2001 for reasons of improved production line efficiency. But now it’s back, and ironically it’s for the same reason.

This engine also uses an integrated starter and generator (ISG) to replace the traditional alternator and it also has a 48-volt motor to provide power directly to the A/C compressor and the water pump. This means that they’ve cleared up the space usually taken up by the accessory belt drive that’s normally at the front side of the engine. So now the new engine is almost as compact as a standard 4-cylinder engine with a belt drive.

This also comes with an electric turbocharger that makes up for the turbo lag. It only takes one-third of a second to get to 70,000 rpm and during that time the ISG provides you with an extra 20 horsepower and 162 lb-ft of torque. So when the electronic turbo has spun, the bigger twin-scroll turbo is ready to get you to redline, and this means the acceleration is much smoother than your normal turbo engine.

This inline-6 can provide you with a minimum of 408 horsepower and 369 lb-ft of t torque, which is roughly similar to the output you get from a V-8 engine. Yet the fuel consumption of the I-6 is 15% more efficient than what you see in a V-6 engine. The main catalyst is also attached directly to the turbo, so it lights off in just 20 seconds or less. This minimizes all the other emissions.

Have you seen the superb engine under the hood of a C63? The turbos, exhaust plumbing, heads, and block in this luxury V-8 are basically the same. You even get the same 17-psi boost pressure.

The two main differences is that, one: AMG ventilation is better because its air-cleaner/intake system is much less restrictive. Two: the AMG cars also have engines that come with a metal cover, while in the S-class you only get a plastic cover. That’s why the turbos in this new engine have also been heat-wrapped, because if they weren’t then they may melt the plastic cover.

The new V-8 also allows for the shutdown of 4 of the 8 cylinders, which takes effect when you’re running in economy mode, you have a light load, and your engine speed is between 900 and 3,250 rpm. The new design keeps the full exhaust system hot.

One of the menus in the instrument cluster will indicate the mode in which the engine is running, and switching between modes is actually smooth and barely noticeable. Part of this smoothness is due to the addition of a pendulum mass damper in the flywheel.

The power output of the engine in the S560 is at 476 horsepower and 516 lb-ft of torque. That’s impressive, considering that compared to the 4.7-liter V-8 the fuel consumption is 12% more efficient.

How Car Paint Colors Are Picked by Car Companies

Buses Will Drive Themselves in Singapore by 2018