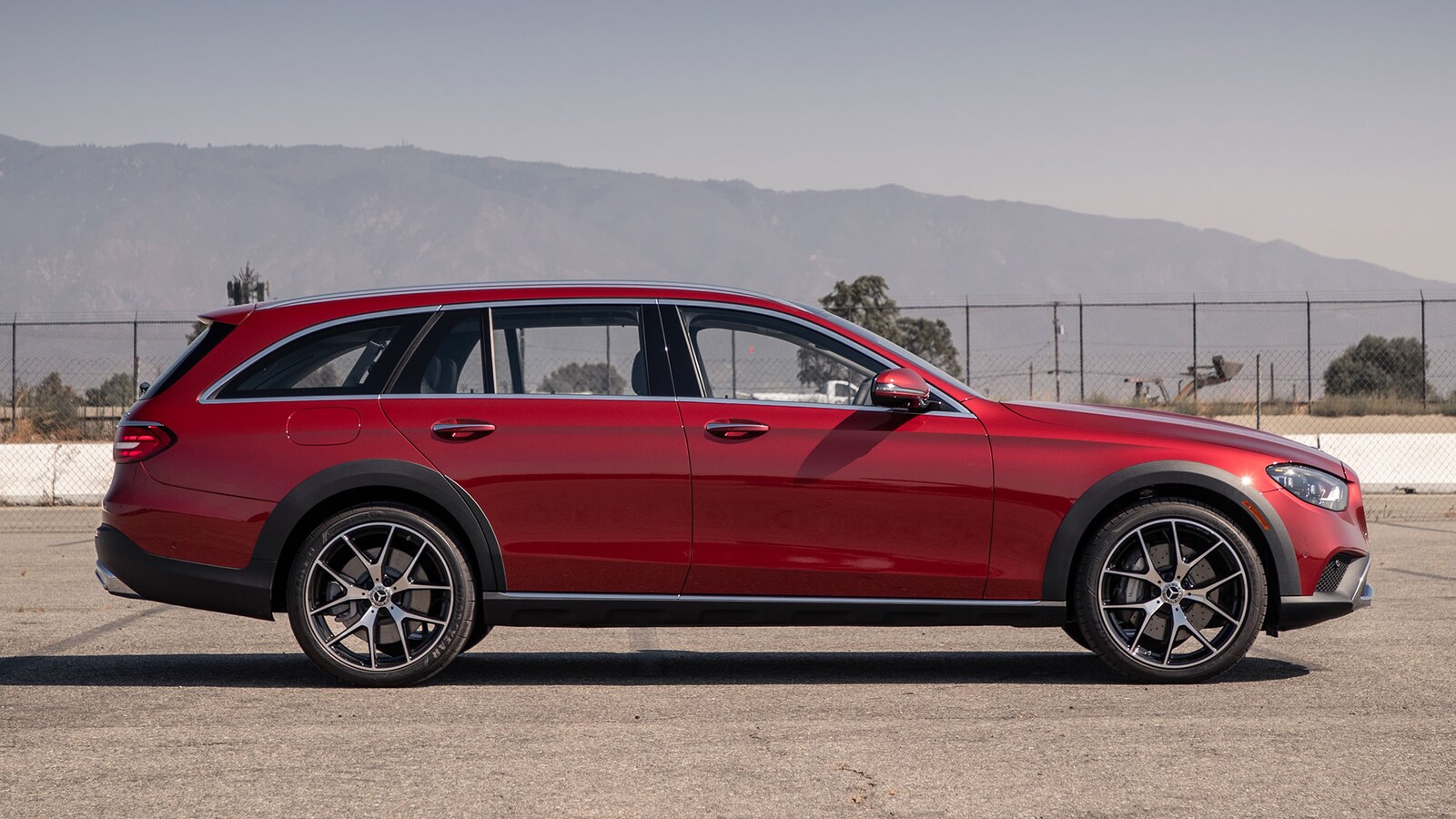 “The red variant will make it look like it’s more of an SUV. In silver or classy colors though, we can’t argue that it’s undoubtedly a wagon.” This is probably what crossover enthusiasts will think of when looking at MB’s E450 All Terrain.

As a top contender for 2021 SUV of the year, the car has been head-to-head with Audi A6.

It probably doesn’t matter that the upper half of the Mercedes-Benz E450 follows the curvature of a sports sedan or that the lower  half justifies that this is a crossover. Regardless, let’s see why a select few might go into buying this Crossover SUV by the German manufacturers who decided this was a good idea.

Just imagine if you were inside this car and you had your wife beside you, then jokingly said “Hey, Mercedes” – the glare from her eyes would beat the one given off by the sun but that’s okay – as the interactive voice control lights up, you push the button for the tinted sunroof to tilt a little and let steam vent from both your wife and your car. But this isn’t the only gimmick this car has under it’s hood.

Mercedes-Benz decided to switch out the twin turbo V6 engines to the 3.0L inline-6 turbo engines. It’s so “quiet” it’s more awkward fuel for the joke above. And speaking about fuel, this car has an ECO Start/Stop system that helps with fuel economy. The car has a 22 mpg rating for city fuel economy and 28 mpg for highway. Although on the heavier side, it accelerates faster than its 2019 predecessor. Mercedes E450 go from zero to 60 mph in 4.4 seconds. Test drives prove that it feels responsive despite the heft associated with crossovers. The E450 competes well with its rival Audi A6.

The car does well as a Crossover SUV and the manufacturers introduced air springs to balance out bumps should drivers decide to take the E450 off-road. The air-springs tighten automatically when you round a corner and the 9-speed automatic transmission makes it easy to transition between city and nature escapes. The higher ground clearance, an additional 1.2 inches, helps improve the sightline for drivers, which is something the 2019 E450 wagon doesn’t provide. This is especially true since the highways are dominated by SUVs which doesn’t help other drivers in terms of improved sightline.

Most of the design changes made to the Mercedes-Benz E450 include the headlamps, tail lamps, the grilles and the front bumpers. The trimmings are in polished chrome and the cosmetic changes aren’t much to differentiate itself from the estates the company has released before, although we commend the company’s effort in addressing a niche group that finds crossovers too contemporary and wagons a bit outdated. The logic for SUV could be the addition of plastic fenders but wagon-lovers hate the idea of breaking tradition so the over-all design is another discussion.

The interior of the car is impressive. Featuring open pore wood trims, leatherette covers which are both heated and ventilated, and the cargo space has a maximum of 64 cubic feet with the rear seats folded in. There’s a certain beauty to how the dash continues to the doors but some find this as a waste of space and makes it feel the front seats are needing leg room. The E450 is a 7-seater 5-door wagon featuring a low load floor allowing for the convenience of lifting which SUV owners might consider looking at when planning to switch to crossovers.

Mercedes-Benz also appeals to more “traditional” customers because the trunk is equipped with rear-facing seats and is reminiscent of a MB 300TE wagon however, depending on body size, this also makes passengers feel they’ve been literally stuffed into the back of a trunk (truck).

One wouldn’t expect this iteration of a wagon-slash-crossover lacks interior space. The unit measures 194.8in long and 73.7in wide, so parking this in a spot shouldn’t be a problem thanks to the updated driver assisted software it has installed. With regards to technological augments to the car, the E450 has Attention Assist, a new software the company claims that help recognize driving behaviors and gives necessary information that can be useful in avoiding accidents.

The 2021 Mercedes E450 4Matic All Terrain wagon is currently priced at $67,600 as indicated on their website and comes in metallic colors of Cardinal Red, Lunar Blue, Obsidian Black, Polar White and various shades of grey.

Overall, this car tries its best to impress and with such a specific niche it addresses to, the challenge is for it to live up to the reputation its predecessors possess. It may not be as wagon-y or as strong as what crossovers should leave an impression of, the car is a proof that new innovations will always have a market available.