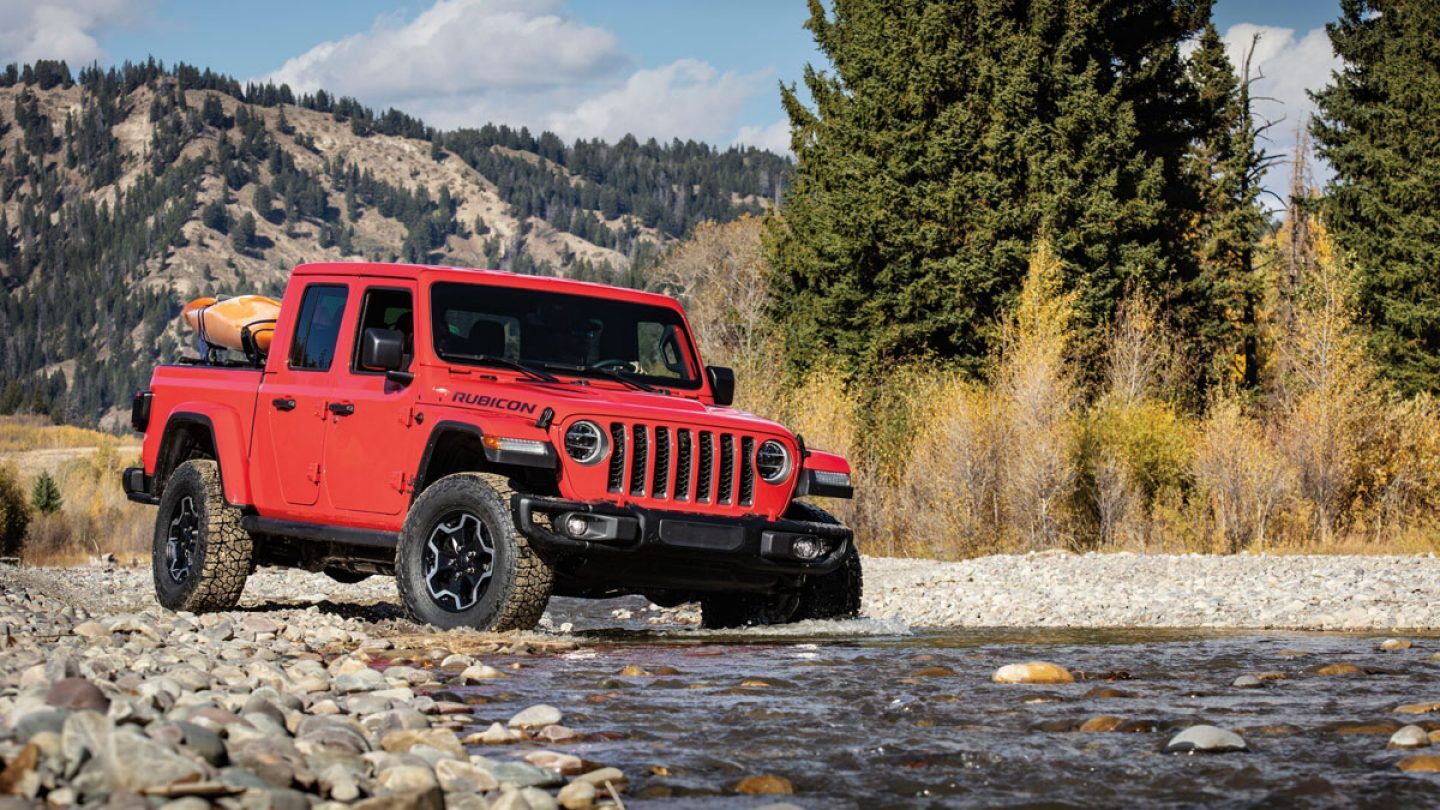 When you put Jeep and truck in the same sentence, it doesn’t seem to make any sense with what these two can offer. For a Jeep, having a long body would not fare well when driving off road. Rather, you would want a small and nimble vehicle in such areas, as is the case for the Jeep Wrangler.

But despite this, the Jeep Gladiator has something to prove in such areas. Length is not the only thing that defines the Gladiator. After all, it shows a different set of features that shine in the off-road trail.

Here are some things you should look into:

When you look at the Jeep Gladiator, it stands between the size of a nimble off-roader and a truck. This midsize vehicle stands out in every aspect. Starting from its length up to its prominent 5-foot-cargo bed on the back.

And yet it doesn’t come close to the sizes of the Chevy Silverado or the Ford F-150. Rather, it has similarities in size with the Chevy Colorado  – as well as the Honda Ridgeline, and the Ford Ranger if we’re talking about rough estimates.

The Gladiator also sports a higher ground clearance and 33-inch-tall tires to clear off-road obstacles without dragging its belly to the dirt and rough terrain.

The Jeep Gladiator comes in four different trims: Sport S, Sport, Rubicon and Overland. Though despite the variations, they come with a Pentastar 3.6-liter V-6 engine from Fiat Chrysler. It comes with 285 horsepower and 260 lb-ft torque.

The Gladiator also uses a six-speed manual transmission as a standard setup. But it also has a variant that runs with an eight-speed automatic transmission.

There is also a turbocharged 3.0-liter diesel V-6. It comes paired with the eight-speed automatic transmission coming soon. One capable of belting out 260 horsepower and 442 lb-ft.

While it holds tremendous power, the Gladiator is not exactly a nimble beast. Then again, speed is not a factor when you are on rough terrain.

Instead, it can tow up to 7650 pounds. The Sport trim can pull this off with flying colors, with the Rubicon at 7000. The Overland or Sport trim with manual transmission can tow up to 4000 pounds. 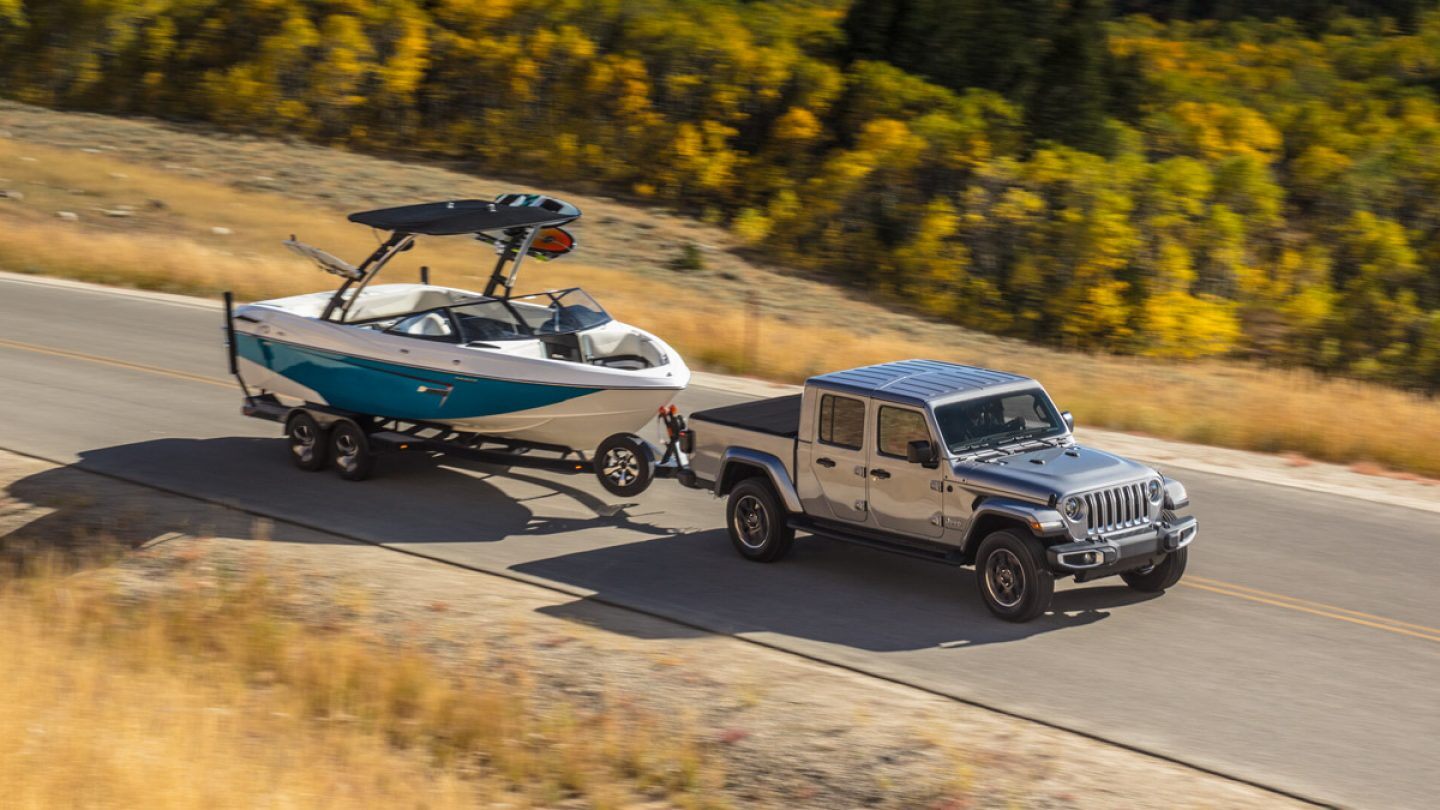 Whatever it does not show in speed, it makes up for raw power.

When it comes to steering and handling, Jeep Gladiator uses the same setup as with the Wrangler and earlier models. This part in question is the use of stick axles. Due to this, the Gladiator does not have the same laser-precise steering. Especially in flat terrain.

This becomes apparent when driving at highway speeds. It will need some steering corrections on the wheel. Despite this, however, it does not stand as a demerit to the Gladiator. It doesn’t stop it from providing a comfortable and controlled ride.

As for stopping capability, it was able to pull off a 199-foot stop from 70 mph.

On the inside, the Gladiator boasts a mix of modern design and necessary function. You can see this with its waterproof start button. The infotainment touchscreens with sizes at 7.0 or 8.4 inches fit well with this aesthetic.

To complete this mix of function and design is the large secondary control knobs for volume and fan adjustments. The seats also allow for more space with the adjustable seatbacks and seat bottoms, providing more legroom when deployed at the same time.

The charm and style that the Wrangler has with its cabin features carry over to the Gladiator. You can see this when checking out the features found on the dashboard. The seat functionality is more of a Gladiator exclusive.

The Gladiator brings out the union of both the off-road capabilities with the power found in midsized vehicles. It has a comparable functionality seen in pickup trucks.

When it comes to price, the Gladiator Sport starts at $35,040. The Sport S at $38,240, and the Overland at $41,890. The Rubicon starts at $45,040. With this, the Jeep Gladiator brings together the off-road performance of the Wrangler with the versatility and capability of a pickup truck.

With it, Jeep stands with a solid option among midsize vehicles, offering a chance for this particular niche to run well with other midsize and pickup truck enthusiasts.

So if you are looking for something that can handle rough terrain that a Jeep can but have the features of a pickup, take a gander at the Gladiator.