Unveiled at an event in the Audi‘s native land of Ingolstadt, Germany, the glamorous 2019 A7 hatchback comes loaded with the goodness of a plethora of semi-autonomous driving features. A7 shares the same multimedia system with the recently revealed A8 full-size luxury sedan, while it derives its coupe-like roofline from its predecessor.  Unleashed to offer a cut-throat competition to the likes of Mercedes-Benz CLS-Class and BMW 6 Series Gran Turismo, A7 is likely to showcase the German Auto-maker’s new naming strategy with the 55 TFSI model launching first.

Even though, the 2019 A7’s contours haven’t changed much, the hatchback is enriched with the sharp-cut styling cues that distinguish it from its predecessor. These new features include a wider trapezoidal grille, the full-length LED taillights, and sleeker LED headlights complimented by much larger openings in the lower front fascia. Deriving its exterior styling from the larger A8, the hatchback caters enthralling alloy wheels that are available up to 21 inches in diameter. And if you happen to reside in the Europe, the new A7 provides you with the luxury of availing LED headlights in three variants, including Audi’s Matrix LED units with laser technology.

Peeping inside this masterpiece, one could glimpse over the similar interior layout as the larger A8 sedan coupled with two large touchscreens right at the center of the dash—the lower one measuring 8.6 inches while the upper one 10.1 inches.

What makes the new A7’s interior stand apart is the three-spoke steering wheel which replaces the A8’s techy-looking two-spoke wheel. Furthermore, the carmakers went an extra mile to cater to its customers with the Audi’s slick virtual cockpit system, which substitutes the time-honored analog gauges with a 12.3-inch configurable multi-information display.

To take your driving comfort to a newer height, Audi has incorporated the 2019 A7 with the new multi-adjustable front seats featuring advanced-functionalities like ventilation, heating and massage functions. Thanks to the two-separate rear-seating options, the new A7 is ready to storm the market as a four- and five-seater.

Seeking inspiration from its larger sibling, the A8, the 2019 Audi A7 is fully connected and features a wagon load of semi-autonomous driving features. Audi Connect climbs the upgrade-ladder to load the car with the car-to-x services that transmit accident warnings and hazard information to other vehicles. What makes this car stand a notch-higher than its competitors is its enhanced adaptive cruise control system which is now complemented by the adaptive driving assistant, only to feature steering interventions to assist you drive in your owl lane. 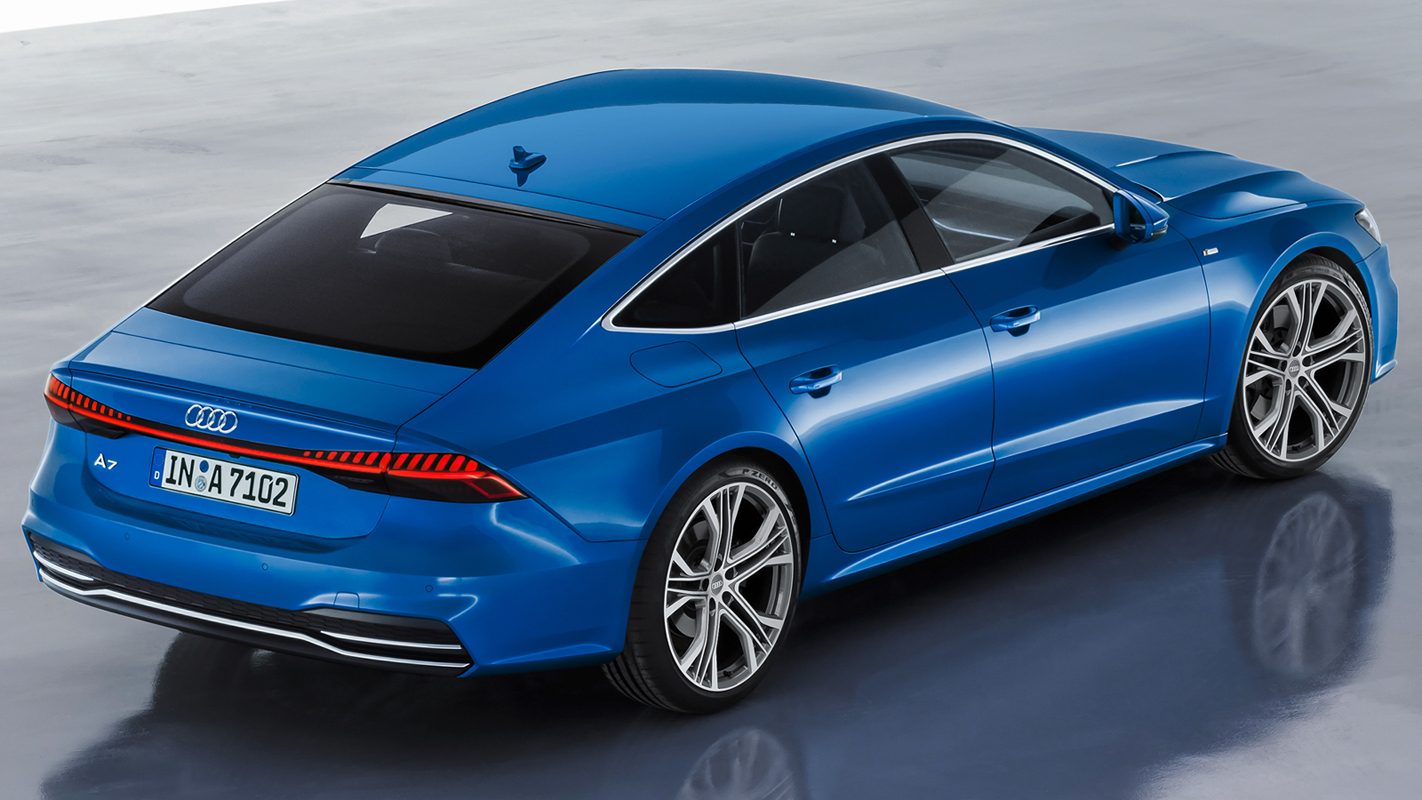 The new Audi A7 derives its power from the turbocharged 3.0-liter V-6 which generates power equivalent to 340 horses and a torque around 369 lb.-ft. Plus, it comes loaded with the goodness of a seven-speed dual-clutch automatic transmission. Just like the full-size A8, the A7 showcases a belt alternator starter and a 48-volt primary electrical system that compliments the lithium-ion battery to a regenerative braking and empowering the car to coast with the engine off at speeds between 34 to 99 mph. The car’s engine start/stop system could automatically come into play at speeds up to 14 mph, and by working in conjunction with the front camera, the car restarts just when it observes the vehicle in front of you moving forward.

The 2019 Audi A7 could now be availed with the latest suspension setup that incorporates all-wheel steering, which helps the car reduce its turning circle by 3.6 feet. Furthermore, the all-wheel steering system works wonders to boost stability and assist the car in changing the lane at 37 mph or higher by enabling the rear wheels follow the same direction as the front. To be thrown open to the audience in three different suspension modes: a standard steel spring suspension, suspension with electrically-driven dampers, the sport suspension with 0.4-inch lower ride height, and a self-leveling air suspension.

The 2019 Audi A7 will be produced at the automaker’s Neckarsulm facility in Germany with the first models to be rolled out in February 2018 and storming the U.S market later in the year. Although all the major markets will feature A7 with a range of gas and diesel powertrains, the US market will have to settle for the 3.0-liter turbo V-6 until the likely arrival of more powerful S7 and RS 7 models.