The Cadillac Escalade and the Lincoln Navigator are two luxury SUVs that have long dominated the SUV market. And with the improving U.S. economy and falling gas prices, expect these two behemoths to continue doing so.

Gas prices have been falling since last year, and it is predicted that this will continue in 2015. This development is expected to further boost the sales of the Cadillac Escalade and Lincoln Navigator. In fact, Ford says sales of the Escalade have jumped by 86 percent in February this year compared to the same period last year.

The Escalade has traditionally beaten the Navigator in sales. Would the trend continue in 2015?

Here are the specs of the 2015 Cadillac Escalade: 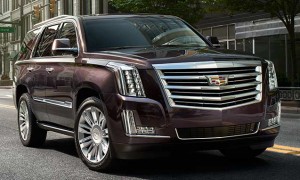 The Cadillac Escalade is considered by many motoring experts as the best luxury SUV in the market. Part of the success is how Ford continues to push the envelope, so to speak, and going against the flow in the highly competitive SUV market. For instance, the 2015 Escalade has longer wheelbase and bold profile, unlike other SUVs that have gone smaller and more fuel efficient.

The biggest change in the Escalade is the interiors, with soft-touch materials giving the impression that indeed, this is a luxury SUV.

Here are the specs of the 2015 Lincoln Navigator:

The Lincoln Navigator was the first luxury SUV in the United States, and it remains a force to be reckoned with in the highly competitive industry. The 2015 model is not exactly new although it has updates in terms of engine and interiors.

The new Navigator is backed by a 3.5 liter, twin turbo V6 Ecoboost engine that provides more power and torque compared to the 2014 model. It also has better fuel economy ratings compared to the older model. The 2015 Navigator is even made better by luxurious leather and wood trims that make the SUV look more contemporary.

There are some similarities between these two SUVs. Obviously, both of these vehicles are designed to comfortably carry eight passengers. Both vehicles have the same torque, and are equipped with DVD entertainment systems. Both the Navigator and Escalade also come in two or four wheel drive. Moreover, fuel economy ratings are pretty much the same.

But there are glaring differences as well. One is the engine, with Cadillac sticking to its humongous 6.2 liter V8 while Lincoln opting with the immensely popular 3.5 liter V6 engine. The extra 40 horsepower that is produced by the V8 engine of the Escalade is best felt when the vehicle accelerates to higher speed levels. The larger engine also emits a sound that is more pleasant to the ears.

The Escalade also beats the Navigator in the technology department. Some security features like adaptive cruise control and lane departure warning which are optional on the Ford vehicle are not offered on the Navigator. The Cadillac vehicle also has more impressive features like digital gauge cluster. And the Escalade has a heated steering wheel offered as a standard equipment, something that is lacking in its competitor.

The Lincoln Navigator though is better in some facets like towing. Its 9000 pound towing capacity trumps that of the Escalade, and basically all other SUVs in the market.

In terms of comfort and space, the Navigator is better than the Ford model. Its front seats are more luxurious, and its suspension is so good you will barely notice road imperfections when travelling on it. While the Cadillac is also great for long trips, it’s a notch lower in smoothness and handling when compared to the Navigator.

The Escalade is more expensive than the Navigator, with its base price starting at around $70,000 compared to the $62,000 of the Navigator.

It’s really up to you. The Escalade beats the Navigator in road performance and high tech features, although the Navigator offers more space and comfort to its passengers. You definitely won’t go wrong in either model.

Side By Side Comparison of the BMW i3 and Nissan Leaf

What Can You Expect From BMW ActiveHybrid Vehicles