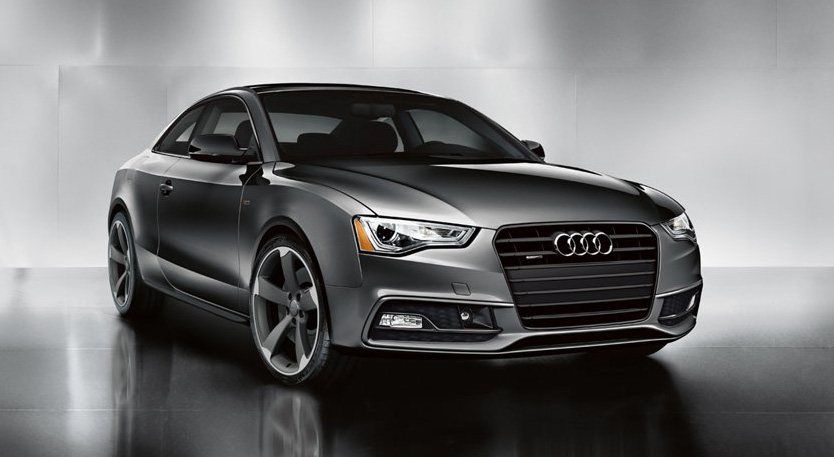 The Audi A5 has been one of the best-selling models of the German automaker ever since it was released in 2007.  It has been well-received by the motoring public for its excellent design, build quality, and performance.

The 2015 version of the Audi A5 has a few changes like new colors and wheels, and option packages. It is offered in coupe and convertible (Cabriolet) forms. The latter has a power-operated soft top. Three trim levels are available— premium, premium plus, and prestige.

The base engine of the 2015 Audi A5 is a two-liter, turbocharged inline-4 powerplant that produces 220 horsepower and 258 pound feet of torque. This engine is good enough to move the car from standstill to 60 miles per hour in around seven seconds. Fuel economy ratings are at a decent 24/32 mpg for the four wheel drive automatic, and 20/29 mpg for the all-wheel drive, automatic sedan.

If you want more power, you can opt for the 3 liter, supercharged V6 engine that has an output of 333 horsepower and 325 pound-feet of torque. Fuel economy ratings however dip to 17/26 mpg for the manual version and 18/28 mpg for the S Tronic automatic.

And if that is still not powerful enough, there is a 4.2 liter V8 engine with an output of 450 horsepower and 317 pound feet of torque. Fuel economy ratings are at 16/23 mpg for the Coupe and 16/22 mpg for the Cabriolet.

Regardless of the engine you’re getting, you can be assured of great steering, braking, and handling. The all-wheel drive version is best suited for rough roads as well as maneuvering during inclement weather.

While the A5 is not a sports car, it has a crisp and taut feel on the road. Its impressive body control and good ride quality makes it a standout.

Although its four-cylinder engine is a bit underwhelming for its class, the A5 is not really that slow when you compare it with vehicles that have six-cylinder powerplants.  Depending on your driving habits, you can expect fuel economy to be in the mid-20s which is quite impressive for an AWD luxury car.

Inside the car, you will notice immediately that Audi was able to strike a balance between form andfunction. The leather seats not only look good but provide a lot of comfort topassengers.  The infotainment system adds a contemporary touch to the interiors of the car, and it helps that the controls are very easy to use.

There’s enough space at the back for two adults. The cabin has around 12 cubic feet of space, enough for a couple of golf carts to fit in. The Cabriolet has 10.2 feet of trunk space.

The A5 looks good outside as well. The bold grille and LED headlight accents give it a very sporty look while its finely tailored sheet metal plus sleek profile make it even more attractive.

To date, the A5 has not been tested by the IIHS and the NHTSA. But it has a good number of safety equipment that should give it a high safety rating even from the most demanding of motorists.

It has standard dual and front side air bags, anti-lock brakes, traction and stability control. It also features a lane-departure warning system which is offered as an optional equipment,  adaptive headlamps and radar-based cruise control.

The A5 also offers very good visibility, although the soft top of the Cabriolet may limit rearward visibility. But there is a rearview camera plus reverse parking sensors that should help drivers in maneuvering the car.

The A5 remains a very good pick for any buyer of an executive car with its good design, build quality, and performance.

The Ever Dependable and Extremely Functional 2015 Acura ILX